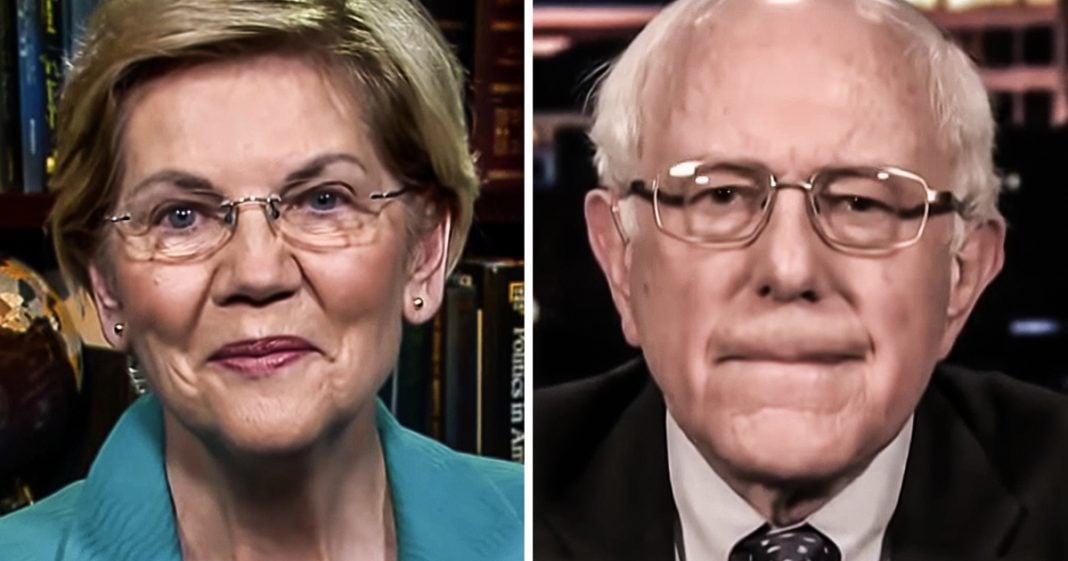 Senators Elizabeth Warren and Bernie Sanders are currently the only major candidates running for President who aren’t trying to cozy up to Wall Street. Even though other candidates have pledged to not accept corporate money, they have still been meeting with Wall Street bankers and doing fundraisers with the same people who tanked our economy a decade ago. We need more people like Warren and Sanders, as Ring of Fire’s Farron Cousins explains.

Most of the people running for president on the democratic side of the aisle right now have agreed that they are not going to take corporate money in some form or fashion. Right. A lot of them have just kind of said, I am not taking any money from corporate super pacs or I’m not taking any money from the fossil fuel industry, but hell, y’all take money from the employees and the executives all day long. And it seems to be the same with Wall Street. Right now there are only two major candidates running for president. You know, people pulling above 2% who have not reached out in any way, shape or form to Wall Street executives on Wall Street banks to fund their campaigns. And even before looking at the title of this video, I’m pretty sure you could already guess who those two people were. Senator Elizabeth Warren and Senator Bernie Sanders.

According to reports, these are the only two major presidential candidates, and I say people pulling above two or 3% who have not reached out to Wall Street. They haven’t shown up at Wall Street. Other folks have. Pete Buttigieg has shown up at Wall Street and met with people about giving money. So has Kamala Harris. So as Joe Biden, so has Amy Klobuchar, so has Beto. They’re all reaching out for that Wall Street cash. Over the last 30 years, Wall Street banks have given more than $6 billion in direct political donations to candidates from every party for any race. $6 billion since 1990 that money is almost evenly split. You know, 40 some odd percent went to Democrats in a little over 50% went to Republican. So Republicans have a slight edge, but it’s getting closer. And in fact, in recent years, that gap between the money given to Democrats money given the Republican’s is actually closing according to open secrets.

Now, here’s the thing. In 2016 the biggest donor for the Democratic Party was Wall Street banks. So you may not think it’s a big deal that Oh, Elizabeth Warren and Bernie Sanders aren’t taken Wall Street money. Oh, good for them. Yeah. Wow. That is huge. That is a major deal. And it shows that not only can you run a successful campaign without reaching out to Wall Street, but it all show also shows the level of integrity that these two candidates have. They understand. They remember that the crash of 2007 2008 all of the pensions wiped out for people who had been saving up their entire lives for retirement. All of the Robo signing by mortgage companies, you know, illegally foreclosing on people people’s homes causing this housing crisis, charging us interest, interest rates, excuse me, of 22% Sanders and Warren remember that? And they’re not about to walk into the office of the people who made these decisions. Most of these decisions, by the way, criminal, but they’re not going to walk into their office and say, Hey, I know you’re a horrible human being who did horrible things. You destroyed our economy. How about giving me some money for my campaign?

And believe it or not, folks, that actually takes courage because there’s not enough candidates willing to do that. It is disgusting to see anyone on the democratic side of the aisle walk up to a Wall Street banker, walk into a Wall Street bank, or go to the home of a Wall Street executive with their hands out saying, please give me money for my campaign. I promise I am not going to pass any laws or regulations that are going to make you not be able to engage in the same criminal conduct that we know you engaged in 10 years ago.