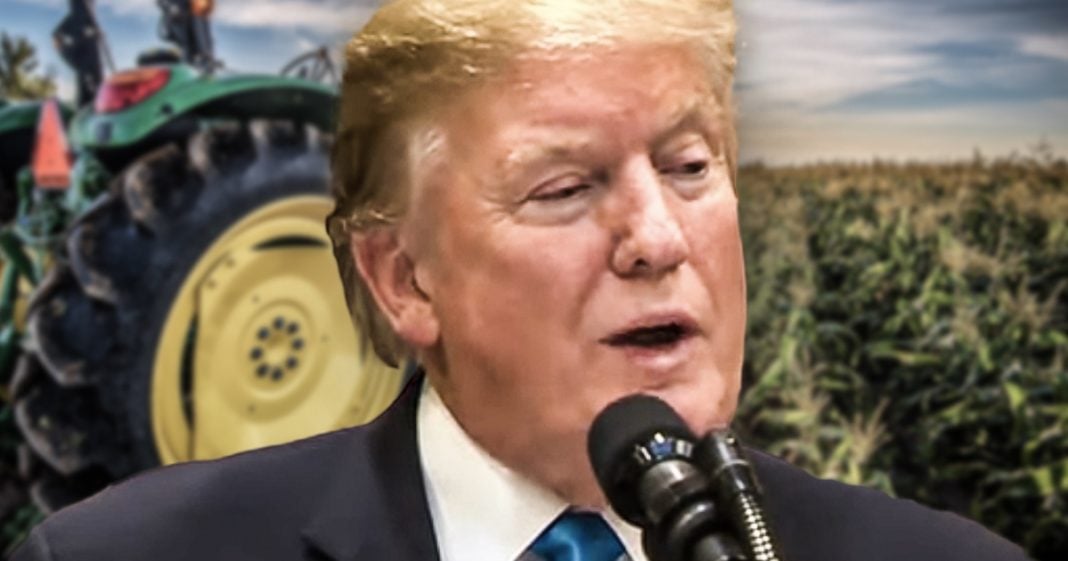 Donald Trump announced this week that he would be putting together a $16 billion bailout package to farmers who have been harmed by his trade wars. And while it is important that we help those who are struggling, we have to remember exactly why this is happening and why the President is bailing these people out. Here’s a hint: It has nothing to do with him feeling empathy for struggling farmers. Ring of Fire’s Farron Cousins explains.

This week, Donald Trump announced a new campaign strategy for the Midwest. After all, he’s got to make sure he shores up those Midwestern votes because those are the votes that gave him enough of an electoral vantage to win in 2016 and this new electoral strategy is to start handing out $16 billion to farmers in the region, and he’s doing this in a four in the form of a bailout to basically try to bribe all those farmers who have been hurt by his trade war with China and is still supporting him. On Thursday, he held a little press conference that very quickly went off the rails, but the press conference was supposed to be about this $16 billion farm bailout in addition to the previous bail out of a couple billion dollars. He had people standing behind them. They had the cowboy hats on so that you knew they were ranchers, because if you’re not wearing a cowboy hat, people don’t know, so you’ve got to make it really crystal clear for the idiots.

Nonetheless, he said, we’re going to give him $16 billion. That’s $16 billion is not because Donald Trump’s Trump understands that farmers are struggling. That $16 billion is because he wants to buy their votes. That’s why he did the last bail out shortly before the midterms cause he thought for sure that was going to ease all their fears and hey, I know you’re getting destroyed by our trade wars, my trade wars. I know your farm has gone under and you just lost generations worth of a your livelihood, but here’s a little bit of a government handout. Please make sure you voted in November. For me, it’s not going to work. I’m sure it’s gonna work for some people, but I think everybody else sees it for what it is. This is legal bribery with our tax dollars by the way, for the consequences of a trade war that Donald Trump didn’t quite understand.

He sees his poll numbers in the Midwest dropping any think? I think he understands at this point that that it is because of the trade war. He’s absolutely devastating communities. Bankruptcies among farmers are higher than they’ve been in over a decade and it is 100% because of his trade war. So he figures he can take 16 billion of our tax dollars, throw it to these people, and maybe that’ll be enough to get some more votes for them in 2020 but it also signals two things. One is that this trade war is not going to end anytime soon. If it were, he wouldn’t be bailing these people out. He would be telling them, sit tight for another week or two. I got you covered. This thing’s coming to an end. But he’s not. He’s handing out $16 billion. The second thing it shows is that Donald Trump’s still doesn’t understand what any of this means.

What any of this, uh, does the people here in the United States. And here’s what I mean. Here’s a quote, um, that he said during his little press conference, he said, farmers have been attacked by China. We’re winning it big. We’re winning it big. We’re winning it so big, in fact that we have to hand out an additional $16 billion because we’re winning so much. We’re not winning anything. The United States never wins in a trade war. Nobody actually wins in a trade war, and Trump still doesn’t understand that. He doesn’t understand the consequences of his actions because he is not a smart human being. There is no denying that point right now. He doesn’t know. He has economic advisers that either haven’t told him or they don’t understand or they did tell him and he just doesn’t understand it. Either way, people are suffering in this country and they’re suffering because of the decisions that Donald Trump alone has made and he thinks he can throw $16 billion of our tax dollars at these people to make them forget it for another 18 months. It ain’t going to happen. These people are going to remember, yes, there’s going to be a few that get paid off and we’ll vote again for Donald Trump. But from what we’ve seen from the polls, from interviews with these people, they know exactly why this is happening to them. They know exactly who is to blame for it and they’re not going to be forgiving when they head to the polls in 2020.