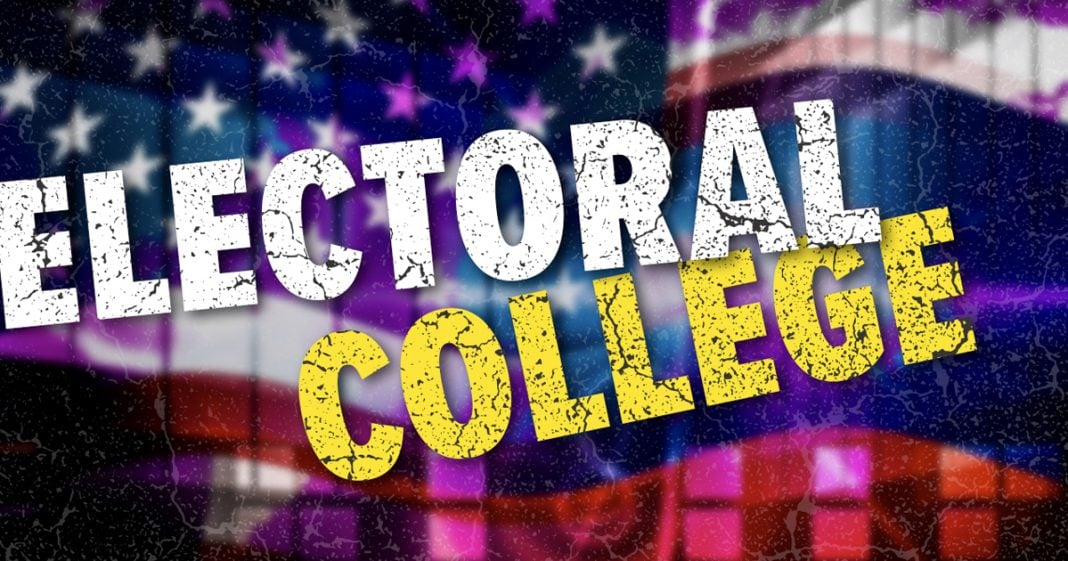 Nevada is moving forward with a plan to give their electoral votes to the winner of the popular vote, making them the 15th state to take this action. Republicans aren’t happy that states want to move away from the electoral college, likely because they’ve been benefiting from this archaic system for the past few decades. Ring of Fire’s Farron Cousins explains what’s happening.

Hoping to prevent a repeat of the outcome of the 2016 presidential election. 15 states have now signed onto a compact to award their electoral votes to whichever candidate wins the national popular vote. 15 states are now saying that it doesn’t matter who wins our state. Every elector here is going to go for whoever wins that popular vote.

Nevada was the 15th state to join that this week, and that now brings the total number of electoral votes to one 95 once they get to 270 electoral votes pledge to go to the national popular vote winner, the pact goes into effect. So technically if they do not hit that too 70 marks, so they need 75 more electoral votes to get there. It may not end up happening, but the momentum is growing and the momentum has has grown exponentially in such a very short time and we’re now seeing these other states, states we didn’t think would even want to join this thing. Join up and say, you know what? Enough is enough. Let’s get rid of this archaic, outdated Electoral College and start actually listening to the will of the people when they vote for one person instead of the other, and yet somehow the other gets to be the president because this system is backwards.

They don’t want to repeat of 2016 they don’t want to repeat of the 2000 election, but the people who are fighting this, of course, are the Republicans. Why? Why just gave you the reason? 2016 and 2000 Because in recent decades, the only people to benefit from the electoral college happened to be the Republicans. In fact, two of the worst presidents in the history of the United States never would have been president at all had we not had the electoral college.

Let me think about it. Not just with Trump or with George W. Bush in the year 2000 had that man not won the electoral vote, even though we lost the popular vote. This country would be so much different right now. You know, all these horrible studies that we’re seeing come out saying, we’ve got 12 years left before the worst effects of climate change take place. We wouldn’t be seeing those reports because they never would’ve had to have been done because we would have had an environmentalist Al Gore in the White House instead of an oil industry guy, George W. Bush sitting in there. So many problems could have been fixed. So many problems could have been avoided. We would be in a much different country today, so different in fact that perhaps I wouldn’t be sitting here talking to you right now, but it is what it is, but hopefully not for much longer. Hopefully more and more states join onto this and we say, you know what?

Maybe we’re not taking it out of the constitution. We’re just going to change the way we award our electors because after all that actually is up to the states. They have that constitutional authority to decide where their electors go and that’s a huge benefit to them. That’s going to prevent a legal battles from really even starting. I’m sure they will start, but there’s not much they can do. When the constitution says no, they get to decide how to award those electors and Republicans are still out there arguing, oh, if you get rid of the electoral college, then most of the con uh, states in this country, nobody’s going to want to even talk to those voters, which is absolutely one of the dumbest arguments I’ve ever heard.

Yes, they’re going to talk to them because at that point, the popular vote matters. So we’ll vote in Wyoming is going to count as much as a vote in California. How do Republicans not understand that? How do the critics of this plan not understand that one person, one vote doesn’t matter where you are in the country? Abolishing the electoral college makes every single vote count equally having an electoral college. Yeah, that makes New York, Texas, California, Florida, Ohio, Pennsylvania puts more emphasis on those states. So people do get a benefit from ignoring your Wyoming’s and Montana’s and Dakota’s abolishing the electoral college changes that. And suddenly these states that never get to see a presidential candidate swing through might be surprised at the next location of a presidential rally.