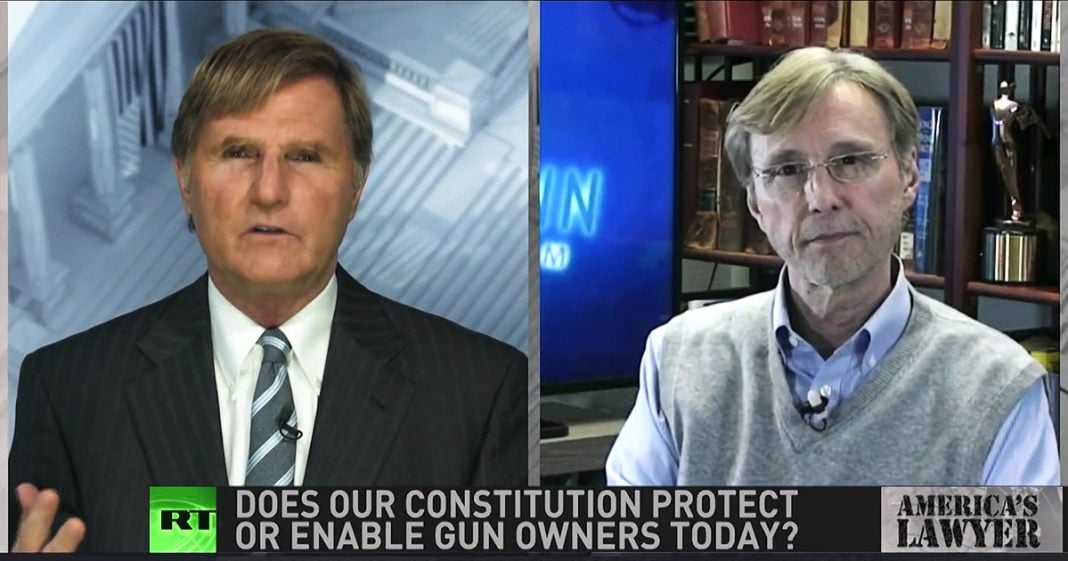 Via America’s Lawyer: Radio Host and author Thom Hartmann joins Mike Papantonio to walk us through the genesis of our Constitution’s second amendment. He lays out concerns expressed by our founding fathers, and how today’s gun violence is inspiring activism to combat the stranglehold gun lobbyists continue to have on Capitol Hill.

Mike Papantonio:             It’s with a heavy heart that we witness media being flooded by tragedies relating to gun violence with mass shootings, seeming to go on like a grim clockwork. Americans today are left with, they’re left questioning just what protections are we afforded to gun owners under the second amendment. But exactly what constitutional rights did our founding fathers intend? Joining me to talk about this is Thom Hartmann, radio host and author of the book, “The Hidden History of Guns and the Second Amendment.”

Thom, I want you to just to spend more time talking about this. It’s going to be less question and answer because I want, I want the viewers to hear what you, what you’re presenting in this book because they are new ideas. From your perspective, what’s the fundamental purpose, for example, of the America’s, American’s right to bear arms? What’s your take on that?

Thom Hartmann:               Madison had just finished the constitutional convention in Philadelphia. They had the first draft of the constitution or the final draft, I guess you’d call it, of the constitution. He sent a copy of it to Jefferson in France. Jefferson was his mentor. He said, you know, gee, Thomas, what do you think about this? And Jefferson’s went, and sent him this long letter, which we can all, you can still read, which is pretty astonishing, this letter.

And I do not like that there is no explicit provision banning standing armies during times of peace. And this was the concern that somebody in the founders had because they were all studying, you know, students of European history and they all knew that country after country, after country, going back to Rome and Greece and everything else, but in particular, you know, hundreds of European countries over the previous thousand years had been taken down by their own armies.

You know, they, they, they’d raise a giant army, they’d March off to war. They have a glorious war and then after the war, they didn’t disband the army and the army would ended up taking over the country. And so Jefferson was so emphatic about that, that, that Madison’s response was, okay, we will do two things. Number one, we will build it into the constitution that every two years, the entire Congress of the United States has to decide whether we’re going to continue to have an army, if we’re during times of peace.

Mike Papantonio:             Thom, how do our gun ownership laws compare to those of other countries? I mean, I think we lose sight of that sometimes that, we’re pretty different when it comes to gun ownership. What’s your, what’s your observation of that as you wrote this book?

Thom Hartmann:               We are different from many other countries in that we have a fairly laissez faire attitude towards guns. We just let the gun manufacturers do what they want, you know, and, and own as many politicians as they want. And the result of that is all the, all the deaths that we see, 40,000 gun deaths last year. This is, there is an absolute and direct correlation between the number of guns in circulation and the number of gun homicides and suicides that we see.

And for example, in Australia after the Port Arthur massacre in 1996 when they said, okay enough, we’re gonna make it, you know, we’re gonna regulate guns. The sort of like the way we do cars, you’ve got to have a drivers license. And you know, they, they made it a little harder to own a gun. It’s still not impossible or even difficult, but harder. And as a result of that, not only did homicides go down, not just in the first year, but over a long period of time in Australia. But suicide’s went down as well because guns weren’t as available.

Mike Papantonio:             Thom, you hear this, you hear this argument that our vast media coverage of mass shootings is the product of sensationalized news. It’s a news cycle problem, and that our gun laws truly are to blame for this, this, this constant barrage of killings. You know, you hear, you hear both sides of that argument. Actually there’s several sides of that, not two sides, but you hear the argument that this is just all sensationalize. You finished writing this book. You’ve, I’m sure you have done all the research that you typically do when you write a book. What do you come away thinking about is on that particular issue of this is just all sensationalized? What’s your take?

Thom Hartmann:               It’s, it’s nonsense. I mean, it’s, this is a real issue that the United States is the only developed country in the world that has regular gun massacres. You know, typically on mass, mass murderers or mass murders done with guns, typically three or four a week now. And, you know, I mean, occasionally that’ll pop up in some other country. We saw recently in New Zealand, we saw it in Norway back five years ago, four or five years ago. One incident and it shocked, not just the country but the continent. So no is not, this is not an invention of our media at all. This is a very, very real problem and it’s more or less uniquely American.

Mike Papantonio:             You know, I’m wondering what role do you, you’re seeing youth, I mean it’s kind of encouraging. You’re seeing youth rise up and say, you know, we want to shape gun legislation. Are we making any headway there to where we’re coming more intelligent kind of gun legislation? To where maybe we can even get back to the point to where we can sue gun, gun manufacturers when they do lawless types of things that we often see gun manufacturers do. What have you observed?

Thom Hartmann:               Well, being able to sue gun manufacturers would be a marvelous thing. You know, Pap, I know that you know this story really well cause you were in the middle of it. You are one of the real heroes and good guys in this. Back in the, in the late nineties the most powerful lobby in Congress was the tobacco lobby. You know, nobody defied them. Mike Pence was writing op eds about how tobacco doesn’t cause cancer. I mean I was just like the tobacco lobby just owned the country.

And then as a consequence of a series of lawsuits like you were involved in and investigations being done by Congress, it came out and the American people realized that the tobacco lobby, the tobacco industry had been lying to us for years. That for decades they’d known that their product was killing literally a half a million Americans a year and they were covering it up and profiting off it and they lost that political power.

I think that that, I think that that moment in the late nineties when the, when the tobacco lobby went from being the most powerful in Congress or in DC to being one of the least powerful, is about to be replicated with regard to the gun lobby. The gun lobby and the NRA in my opinion, have been so exposed and, and in large part I, you know, hats off to the Parkland kids, but have been so exposed as essentially shills and criminals that I don’t think this is going to last much longer.