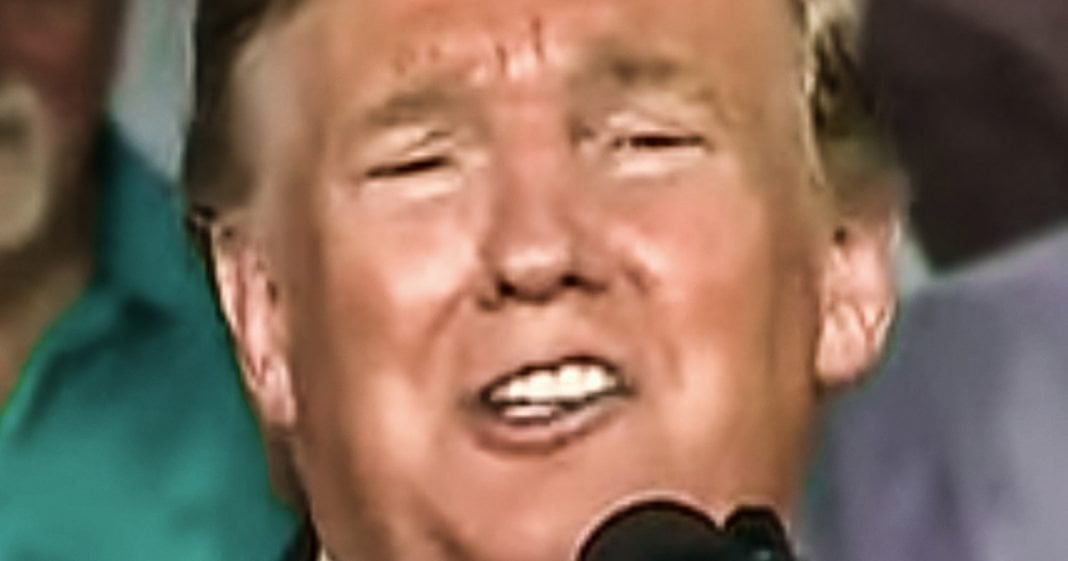 Donald Trump is addicted to television and golfing, not exactly the traits that you want to see in a President. But nonetheless, he’s taking the time to accuse the Democratic Party of actually being the lazy ones in Washington, D.C., even though he’s spent more than $100 of our tax dollars playing golf. The man is so desperate to smear Democrats that he will say anything to see if it sticks, as Ring of Fire’s Farron Cousins explains.

There is zero question whatsoever that Donald Trump is the laziest person to ever inhabit the Oval Office. I mean the man has spent more than a hundred million dollars just playing golf in two and a half years, actually a little under two and a half years. His total vacation and travel tab is just a couple million dollars away from Obama’s and Obama had eight years. Trumps only had two and a half and he’s almost surpassed Obama. By the end of this year, he will have surpassed Obama as spending more on travel than anyone else in the history of the White House. He is on track to spend one out of every three days at a Trump owned property. He is golfed 83 days so far this year and he had the audacity earlier this week to say that the Democrats are lazy, that the Democrats aren’t doing anything, the Democrats aren’t working. All they want to do is investigate. Here’s a couple of, uh, quotes from some tweets Donald Trump sent out earlier in this week.

“So the Democrats are getting nothing done in Congress. All of their effort is about a Redo of the Mueller report, which didn’t turn out the way they wanted. It is not possible for them to investigate and legislate at the same time.”

I don’t know. Actually. I do know Donald Trump’s not a smart man. Regardless of what you say, he’s not, he proves it every day, but does he think that when Congress works on something that’s literally the only thing they do? Does she think that like Nancy Pelosi and Chuck Schumer or sitting there with magnifying glasses and boxes of evidence looking through stuff?

Yeah, the staff is doing that. The staffers are doing that and not even all the staffers. Other staffers are out there helping write legislation, going out, making copies for floor speeches and things like that. They have whole staffs of people and entire days of working and they can do multiple different things because they, unlike you, Mr. Trump or not complete morons, they can do two things at once. Most human beings can actually, he goes on.

“Their heart, is not into infrastructure, lower drug prices, preexisting conditions, and our great vets, all they are geared up to do six committees is squander time, day after day trying to find anything which will be bad for me. A pure fishing expedition like this never happened before and it should never happen again.”

Um, they actually met with you earlier this week about infrastructure. You spent three minutes yelling at them, then stormed out. They are the only party that appears to care about preexisting conditions. They have put forward legislation that Republicans have voted down to lower prescription drug prices and you’re actually taking money from the Va. So all the points you just made her lies.

But again, you’re saying the Democrats aren’t doing anything when in fact they are. Any final, uh, final tweet here, these sent out was the Democrats have become known as the do nothing party? No, unfortunately, uh, I’m gonna say for at least the last 20 years, Democrats are actually the only party that’s been doing anything. Republicans haven’t had a new idea in 40 years since Ronald Reagan came into office. They have offered the same three things, get rid of abortion, cut regulations, and cut taxes since 1980 that is it from the Republican Party. Democrats are actually out there evolving and trying to do things and not spending 83 days out of the year. 2019 golfing. Trump spends 60% of his day in what they call unstructured, unstructured executive time, which as we can see on Twitter, mostly means watching Fox News and tweeting about what he sees on Fox News. And I guess when they go to commercial hilts send out some tweets attacking Democrats. This man is the laziest human being to ever be the president of the United States. And for him to accuse any other person in the world of doing nothing is absolute insanity. Trump hasn’t done anything. He is not accomplishing anything other than pissing off a lot of people because he likes to throw temper tantrums as if he was a giant overweight two year old.