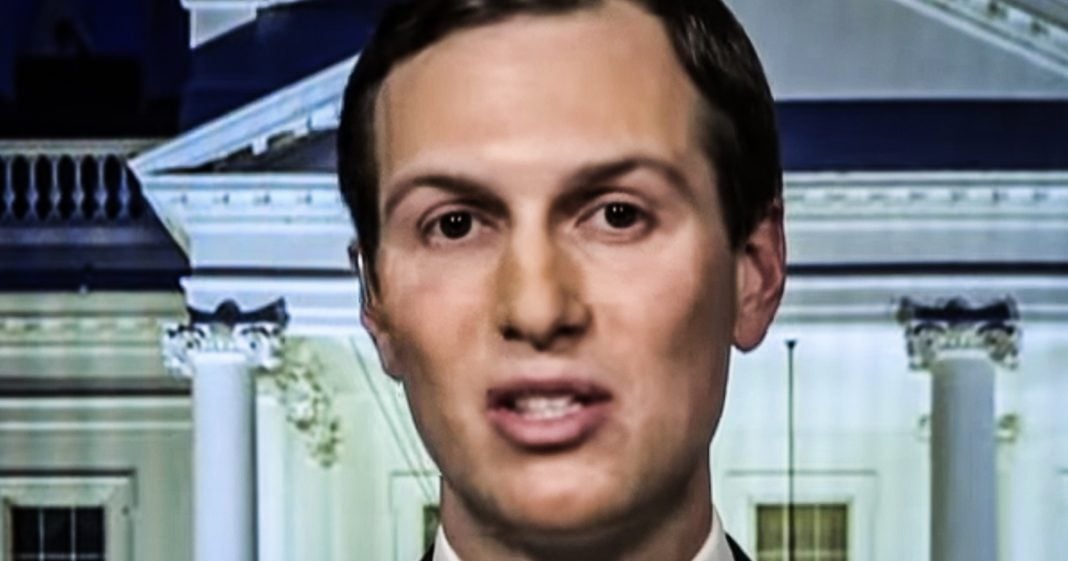 Stephen Calk, the Chicago banker who was indicted this week for attempting to bribe Paul Manafort to get him a job in Trump’s cabinet, was going to get help from Jared Kushner, according to the unsealed indictment. Manafort reached out to Kushner about getting Calk a job, to which Kushner replied with two words: On it! Kushner belongs in jail, as Ring of Fire’s Farron Cousins explains.

There is absolutely no reason whatsoever why Jared Kushner should not be in prison today. This week we found out a little bit more about Jared Kushner’s, uh, potentially illegal activity and no, I’m not talking about the Deutsche Bank story from two days ago. I’m talking about the story from one day ago where it was revealed that Steven caulk a, a bank executive from Chicago. Uh, the federal savings bank was indicted and he was indicted for attempting to bribe Paul Manafort to get him a position within the Trump administration. Here’s the quick backstory on that. Caulk who owned the Federal Savings Bank in Chicago gave Paul Manafort $16 million in loans, even though there were red flags all over the place saying, do not Lynn this man money. Do not give him any money. You’re not going to give it back. He’s got a bank fraud. He’s got tax fraud and his history, he’s being investigated for these things.

We think he might even be working with foreign powers. Please don’t give this man any money. All the red flags told Steven [inaudible] Steven Cock thought, yeah, but you know what? I would love to work in the Trump administration. So here, Mr. Manafort, I’m going to cut you a deal. I’m going to give you your 16 million and then if Trump wins the election, you’re going to put in a good word for me and you’re going to get me a post within this administration. Manafort agreed to that. He got the loan. Then a few days after Donald Trump’s election, Mr. Cox and a man afford an email that included a resume and a list of 10 potential positions that Mr. Koch would except within the Trump administration.

Now, Mr. Koch did end up actually being interviewed for Wa, uh, for these positions. Ultimately did not get them. So what the hell does this have to do with Jared Kushner, right? Was it turns out as part of this unsealed indictment, it was also revealed that Manafort reached out to Kushner to be the guy to grease the wheels to get caught in the door. And when he emailed Kushner asking for this favor, Kushner said two words on it without even questioning because he knew Steven Caulk was a Trump supporter, had given money. And he thought, Hey, hell yeah, let’s reward this guy who helped get my father in law, elected president. Now here’s the thing. That in and of itself may not necessarily be illegal at this point. We do not know how much Jared Kushner knew, but if he knew that there was bribery on behalf of caulk, then absolutely Kushner could also go down with this. But let’s assume for a second that this technically is an illegal for Jared Kushner. So, hey, good for him, right? Jared Kushner still should be in prison because as I previously mentioned, just two or three days ago, we learned that Jared Kushner, uh, was suspected of money laundering by employees at Deutsche Bank because there was money bouncing back and forth. They described it between Kushner’s accounts and the accounts of wealthy Russian oligarchs back and forth, bouncing, bouncing, bouncing.

That’s how the employees described it when they wrote their report that was supposed to be submitted to the Treasury Department because they thought they believed Kushner was laundering money. Okay. Still mild accusations, right? Maybe that’s not criminal activity. So why then should Jared Kushner be in prison? Okay, well if those two don’t do it for you, let’s go back to New York, right? Let’s go back to that Trump tower meeting that Jared Kushner 100% attended and went there with the intention of getting foreign intelligence on his daddy and laws political rival, Hillary Clinton. Oh, that’s still not good enough for you. Then let’s talk about all the housing in New York City. All the illegal activities he did with that, he’s getting popped with fines, but he illegally evicted tenants. He harassed tenants in order to move out. He filed false documents with the housing authority. What more do you need? Jared Kushner, much like his father who already served time in prison, has been engaged in criminal activity for years, years and years and years and years, but instead of sitting in a jail cell today, this man is sitting in the White House doing God knows what. In fact, he is so pathetic and weak and stupid in his current position that even Republicans in DC have admitted that this guy doesn’t know what he’s doing. He thinks he’s doing good things, but in reality he’s doing absolutely nothing because he’s too stupid to know what to do. Kushner should not be serving in the US government. He should be serving a prison sentence inside a jail cell.