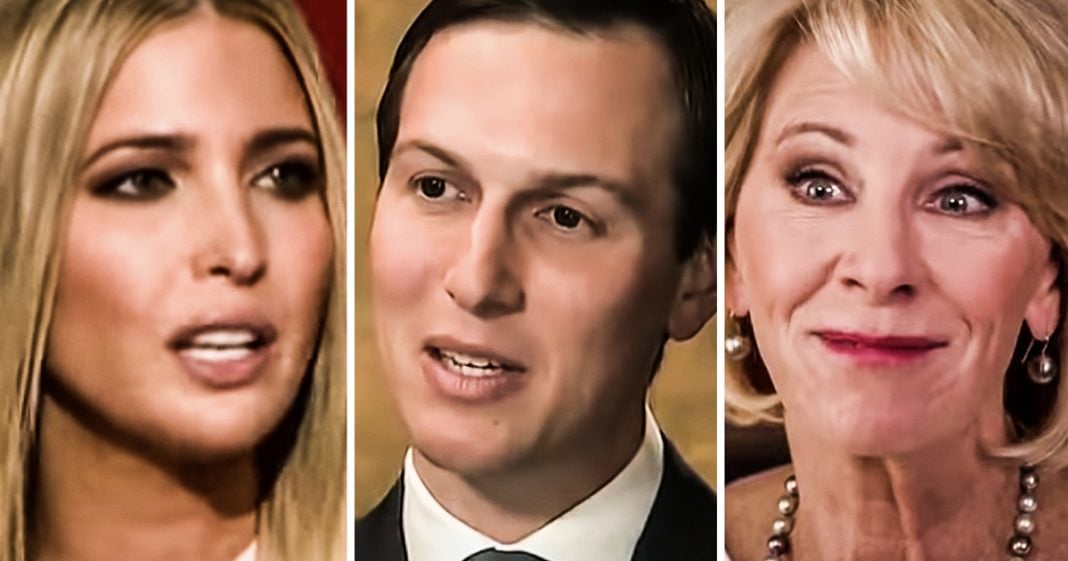 Trump supporters – and even Donald Trump himself – love to tell us that Hillary Clinton broke the law with her use of private emails, and to this day they are still calling for her to be locked up. That jail cell might get pretty full though, considering that there have now been EIGHT Trump officials who have been busted using private emails for official work business. Betsy DeVos, Ivanka Trump, Jared Kushner, and several others have been doing the same thing that they want Clinton imprisoned for, and yet conservatives remain silent about these new email revelations. Ring of Fire’s Farron Cousins discusses this.

In fact, even at Trump rallies earlier this week, they engaged in chance of lock her up because they still to this day in 2019 want Hillary Clinton thrown in prison for using private emails. Even after extensive investigations found that she didn’t do anything illegal. She was irresponsible, they said, but there was no criminal activity there. And the only reason I have to bring that up is because earlier this week it was reported dead. Betsy DeVos, the secretary of education has also been busted using a private email for official work. She is now the eighth member of this administration to be caught using private email. Basically, the eighth member of this administration caught doing the same thing that they want Hillary Clinton locked up for. Here are the other folks in addition to DeVos, Jared Kushner, Ivanka Trump, Stephen Miller, Gary Cohn, Steve Bannon, K.T. Mcfarland, and writes Priebus. Some of them obviously no longer with the administration, but none of them in prison, which is what Republicans want for people who use private emails.

So maybe, maybe those chants of lock her up earlier this week at that Trump rally may, maybe they were referring to Betsy DeVos. Maybe they were talking about Ivanka, but I’m willing to bet they were still talking about Hillary Clinton. Hell, Donald Trump tweets about Hillary Clinton at least once every 48 hours saying, why are they doing investigating her? Because everything in Hillary Clinton’s life has been investigated. I don’t care if you like her or if you hate her. We have to admit because this is what the evidence shows that Hillary Clinton ain’t done nothing wrong folks. She’s fine. She has been investigated to Helen back. The FBI got copies of all the files on the computers. They were not bleached as Donald Trump claims. The FBI made carbon copies of them and studied them back at their, uh, facilities. Hillary Clinton sat for 11 hours of congressional testimony and didn’t complain once.

Yes. I was not a huge fan of Hillary Clinton. I did vote for her. I’m in a swing state. Don’t have the luxury of a protest vote. I did vote for Hillary. Yeah. Never been a huge fan. Yeah, but even still, I’m willing to admit that this woman did not break the law and yeah, she would have been a better president than Donald Trump, and I knew that that’s why I voted for her instead of him. Any Democrats going to be better than any Republican. That’s just a fact for those of us on the left. But I am sick and tired of still hearing these Republicans say, lock her up or, but her emails while ignoring the fact that more people from Trump’s team have used private emails than Hillary Clinton could have ever imagined.