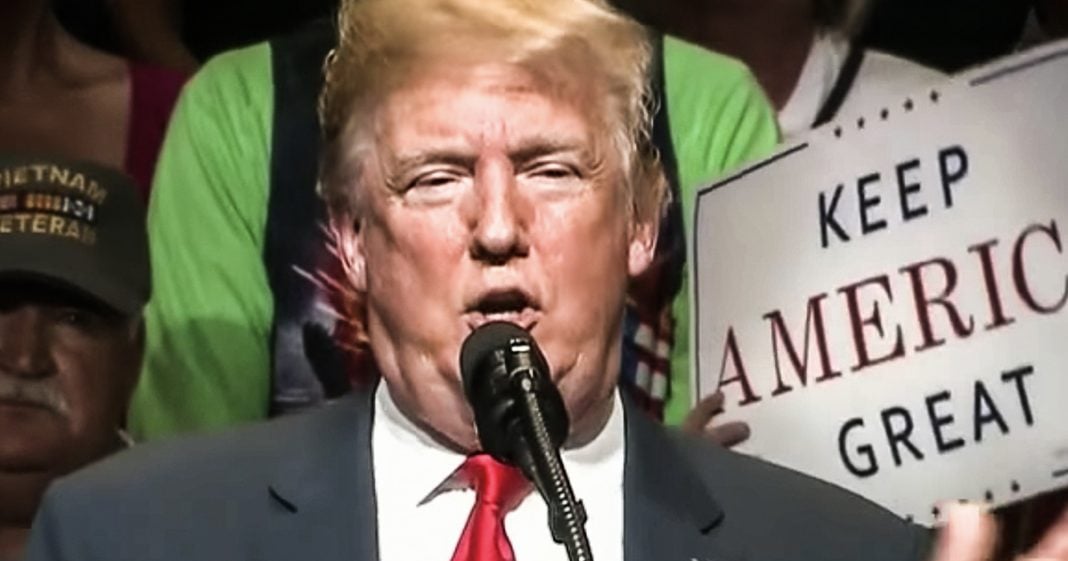 The Los Angeles Times ran a story recently about a man who lost his wife after she was deported under the Trump administration’s policies, as she was an undocumented immigrant. They now share the duties of raising their son from separate sides of the border. In spite of the fact that he has now lost his wife, he still isn’t willing to say that his vote for Trump is a mistake. Ring of Fire’s Farron Cousins discusses this.

Recently the La Times put together a story on a US citizen, a white US citizen by the name of Jason Rochester and his wife, uh, Cecilia Gonzalez. Now, Mr Rochester is a white Donald Trump voter voted for Trump in 2016. Ms. Gonzalez on the other hand, who happened to be Jason Rochester’s wife, little less sure about Donald Trump. In fact, at the time when Rochester was supporting Donald Trump, Gonzalez said, you need to pay attention to what he’s saying about immigrants and building the wall and mass deportations, because that could affect us because the La Times also points out that Ms. Gonzalez was an illegal undocumented immigrant here in the United States.

Mr Rochester chose not to heed his wife’s warnings. He chose to think that Donald Trump wasn’t talking about his wife. In fact, according to the article, uh, he specifically told her, don’t worry, the government’s not interested in you. They want the bad ones. Right? Trump’s only talking about the bad illegals. Not all of them. No. God, no. So it’s okay sweetheart. Don’t worry. Shortly after Donald Trump got arrested, Ms. Gonzalez was deported back to Mexico. And at the time, the two who were married, who are married had a child, young son by the name of Ashton. So for 16 months now father on one side of the border in Atlanta, mother down in Mexico, and she’s having to parent via Skype because she doesn’t get this to your son. At one point they did go down there and travel to visit her and see her and be a family for a few moments and that’s when they discovered that Ashton, the young son had kidney cancer.

So son has to have his kidney removed, go through chemo. He’s in remission. Thank God all while his mother is in another country, denied reentry back into the United States because they have tried and Mr Rochester who says he’s, you know, becoming an immigration advocate almost almost still won’t admit that he made a mistake voting for Donald Trump. That’s the moral of the story. In fact, that’s one of the closing lines of the story. He doesn’t know if it was a mistake. He didn’t necessarily think it’s a mistake, dude, your, your family got ripped apart. Your family got ripped apart. You were conned, you were duped cause you said, oh there are only worried about the bad ones. Just the bad ones. Now let me explain it to you in very clear words. Mr Rochester, any non white person are the bad ones too. These people, any non white person, those are the bad ones. At least according to Trump and his supporters and you still, after your son had cancer and his mother couldn’t even be there with him for the surgery, you still won’t admit that you screwed up.

Let me read this exact quote. Was it a bad decision for my family? Yes. Was it a bad decision for our country? I can’t say sometimes you can’t just think about yourself. You have to think about the broader picture. I feel like God will bless my decision. See that’s the problem though is Republicans, Republican politicians have this amazing way to get people to vote against their own self interest, like with tax cuts or repealing the affordable care act or deporting your own spouse. And you know, honestly, it makes sense that Republicans aren’t speaking up about Trump’s family separation policies when they don’t even seem to care when their own families get separated by his policies. I have the utmost amount of sympathy and empathy for Mrs. Gonzalez and her son Ashton. I have no sympathy whatsoever for Mr Rochester and clearly he does not either.

The crime that Mrs. Gonzalez committed coming here into the United States illegally, that is a victimless crime. She had never been arrested, never broke the law. She was living here as a stay at home mother legally married here in the United States, taking her son to school. Prior to that, she actually did work as a maid in a hotel, so she was contributing to the economy here in the United States, paying school taxes, property taxes, all of that, and yet she was still deported because of Donald Trump and his policies. They didn’t want to give her a second chance. They didn’t want to say, well, hold up. She is married now. Let’s go. Nope, you’re gone. Sorry, your kid has cancer. Maybe your husband should have thought twice about his vote, and then he speaks up and says, no, I shouldn’t have. That’s the level of heartlessness we’re dealing with on the republican side.