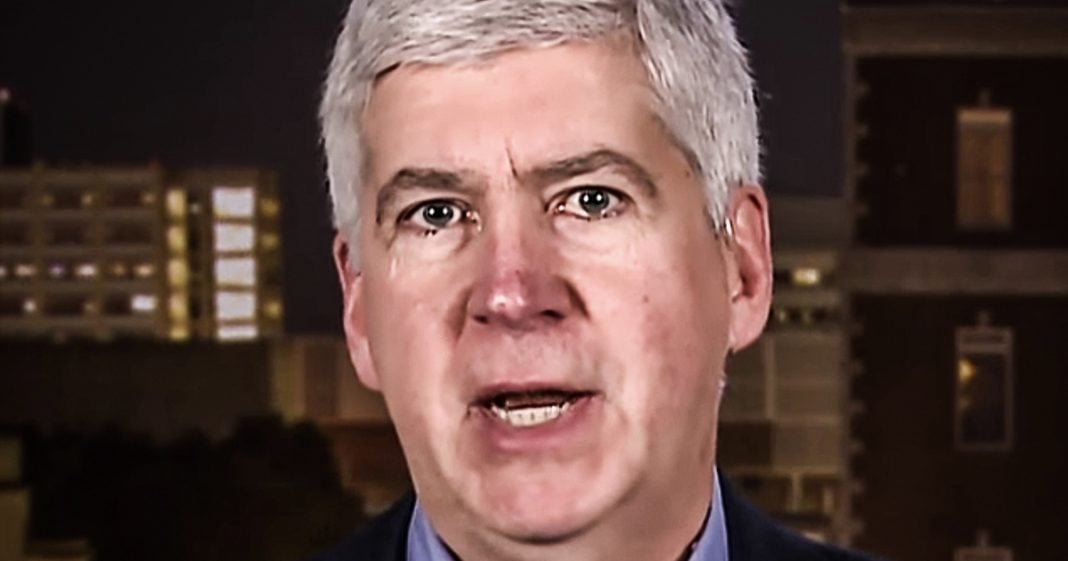 Government officials are typically protected from legal ramifications of their actions in office, but recently a Circuit Court ruled that a lawsuit against the Republican officials who caused the Flint water crisis, a signal that this era of immunity could be over. But there is a catch in the ruling – every judge on the panel that Trump appointed tried to stop the ruling from coming down. These Trump-appointed judges highlight the devastating effect that he has had on our court system and what is really at stake. Ring of Fire’s Farron Cousins discusses this.

Last week, a group of Donald Trump appointed judges actually tried to stop a lawsuit brought by victims in Flint, Michigan over the fact that the Republicans who made the decisions to poison them with led hadn’t been held accountable for it. So you had a mother and her daughter who were suing former governor, Rick Snyder and other officials in both Flint and the state of Michigan who made the decision to give them this lead contaminated water. And because government officials typically have immunity from any kind of a policy they make, even if it hurts people, this had to go to the circuit court and a panel of three judges who first heard the case said, we’re going to agree with the plaintiffs in this case can move forward. So then the officials said, we want the entire sixth circuit to look at this and issue a ruling, not just the three judge panel that you’ve put together.

We want everybody to come in so that we can get this thing dismissed. Well, luckily the full panel did say, Hey, this case is going to go forward. We think this meets the criteria to strip you of your immunity, except for a few judges, a few judges who filed the dissent, the leader of the dissent happened to be a George W. Bush appointee. And then the other three who joined in were all Trump appointees who said that, hey, we’re real sorry. We’ve basically ruined your entire life by poisoning you with led. Something you’re never going to heal from. You know, it destroys your brain. And this is just how you are now. Sorry. But, uh, these people shouldn’t be stripped of their immunity and they can’t be held liable. Luckily the rest of the panel did not agree. And so yes, this lawsuit is now moving forward. But folks, that’s the danger. That’s why we have to care about courts that aren’t just the u s supreme court. Because had Donald Trump had a few more judges on that panel, this case would’ve been over dead in the water a week ago. And yet every time we talk about the courts, we see the Supreme Court in the headline, and that’s all democrats want to talk about. Well, guess what? Trump has packed these lower courts more so than any president in our lifetimes.

So honestly at this point it doesn’t matter what’s going on at that Supreme Court. When we have people like these sitting there on that six 30 a circuit who say that, you know what? Yeah, you’re life was ruined by these men. These men knew their decision was going to ruin your life but dammit we’re not going to let you hold them accountable. And there are protocols in place to allow government officials to be sued for their actions if it is conscience, shocking behavior. So basically if they do something that makes you go what you can sue, cause that would be conscience, shocking behavior. And I would say what’s happened in Flint, Michigan was 100% conscience, shocking behavior. They knew they were going to poison these people, they knew that ultimately they were going to pay more money to the guy who came up with the plan. Then the plan, what’s going to save. So they didn’t actually save money, but they did at any way because they hired one of their cronies to come up with the plan. Gave him a few hundred thousand dollars to save tens of thousands of dollars.

And you’re poisoned an entire town. There is no reason whatsoever why these Republicans who made these decisions and they were Republicans shouldn’t be held accountable. They absolutely should be sitting in court right now and then hopefully a year from now, they’re all sitting in prison because that’s what they deserve. And that’s what they, uh, where they belong. If they’re going to make decisions like this that ruined people’s lives and they knew it would. There is no excuse for this.

But folks, we have been warning you for months and months and months. We’re going to start the seed decisions like this start to go the other way. As Trump continues to pack our court systems with his cronies, with these handpicked Federalist Society groupies decisions like what just came out of the sixth circuit will not be possible in a year or two because Trump and the republicans will have packed all of these lower courts while we’re Democrats got distracted by the shiny thing known as the supreme court, forgetting that most, uh, decisions in this country are actually made down at the lower level courts that are now solidly Republican.