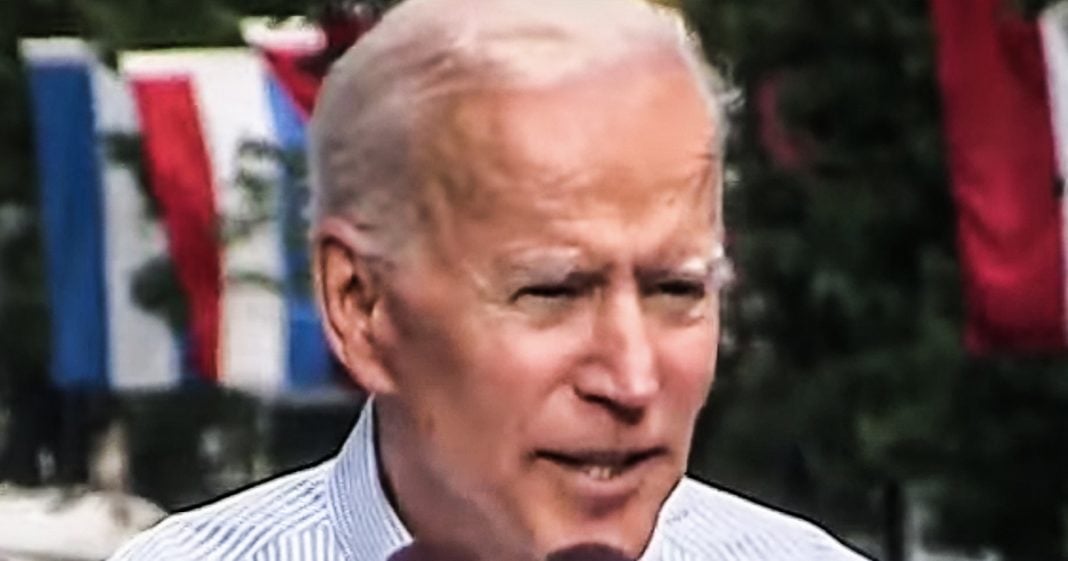 Too many Democratic voters appear to be believe that Joe Biden is the only candidate capable of defeating Donald Trump, or at least that’s what the media would have us believe. The truth is that Biden is too weak on policy to actually bring any Republicans over to his side, and his talking points about being able to work with Republicans are laughable and will alienate progressives. Biden might be enjoying the view from the top of the polls right now, but he won’t stay there for very long as Ring of Fire’s Farron Cousins explains.

Earlier this week we got another one of those stories where reporters went out and talked to Democratic primary voters and those voters said that Joe Biden is this country’s best chance to beat Donald Trump. This particular story came from agents France Press and the AFP spoke to Biden supporters, I guess all over the country here, and I just want to read you a few of the quotes that some of these Biden’s supporters said about why they support Biden. He could lead the nation and bring us back together. One said, Biden is Trump’s biggest rival and has the highest chance of kicking Trump out of office. We need to beat Trump. Another said, I think he might be a healing candidate. Another said that, uh, what draws them to Biden is the candidates broader appeal and moderate politics. Another person, actually the, that person’s wife went on to say, I like the fact that he’s steady and I trust him.

I believe that he’s a good guy and I think we need good. Again, this comes at the same time that Biden’s campaign has released their new theme for 2020 which is let’s stop fighting and let’s start fixing. Now. That sounds like a great tagline for some kind of Hgtv home makeover program, but in politics it ain’t gonna work. I would love it if we could all get along and be happy, friendly, wonderful people who just, nobody argues everything’s great. Republicans work with Democrats and vice versa, but let’s face it, folks, those days are gone and whether you want to admit it or not, they’ve been gone for at least 25 years. This isn’t something that just started under Donald Trump. It didn’t just start under Obama or Bush. This began hell probably even before the Clinton years when everybody started to get a little more polarized, started to get a little bit more angry at the other side, but it was the Clinton impeachment, I guess that really finally drove people even further apart.

So that’s why I say 25 ish years, but Biden’s also the one out there telling us that, hey, once Trump’s gone, republicans will have an epiphany and they’ll start working with me. Really just like they did when Trump wasn’t around. When you were vice president of the United States for eight years, did you not know that any of that happened that Obama not tell you about Merrick Garland? Because I feel like that’s something he should have told you about. Republicans are going to have an epiphany. Trump could have a major, major heart attack today, be in the ground by the end of the week, and Republicans aren’t going to have an epiphany. We could be 20 years down the road from now and Republicans aren’t gonna have that epiphany, Joe. But what annoys me the most are these voters, the ones out there saying Biden’s the only one who can do it.

No Biden’s not. In fact, Biden is probably one of the worst candidates running for president today. Yes, I’m sure he is a nice guy and I don’t think that any of his touchy-feeliness that made women extremely uncomfortable, whichever meant maliciously, I don’t know because I’m not him and that doesn’t make it okay for those women to feel horrible for the way he treated them. They have every right to feel awful for it or feel like they were violated for it. But again, I also don’t think he meant it maliciously, but that doesn’t excuse it whatsoever.

But Biden’s going to piss off progressive’s. You can already hear that in my voice. Biden’s not going to attract those moderate Republicans. You know what is attracting those moderate Republicans though socialist policies? Because as it turns out, they actually overwhelmingly support Medicare for all of $15 minimum wage capping credit card interest rates at 15% they support getting money out of politics. They support the green new deal. They support all of these wonderful programs being put forward by democratic socialists and far left politicians. They don’t want somebody to come up to them and say, hey, wouldn’t it be nice if we could all just work together and get along? I in this Trump guys, he’s the problem. Ain’t gonna cut it. Right?

We saw this play out in 2016 and it blows my mind that there are still people out there today in 2019 saying that, no, we need a few good candidate. We mean a happy guy. We need somebody who’s not Donald Trump. Hillary Clinton ran a, “I’m not Donald Trump” campaign in 2016 and we all know how that worked out because we’re now talking about having to beat Trump in 2020 by name it Biden’s not the guy who’s going to do it. And having said that, I also have to point out that I am in a swing state. I am in the biggest swing state in this country, Florida. So unfortunately I don’t get the luxury of a protest vote if binds the Democratic nominee on. Fortunately I will be voting for him, but I’m always going to hold him accountable and I’m always going to try to push them left. If it comes to that and I’m praying it doesn’t because there are so many better candidates running for president right now.

Biden isn’t at the top, but also don’t get discouraged by these pieces like this. Yes, it made me angry, angry enough to talk about on camera, but this isn’t representative of this country. Yeah. Biden looks like he’s ahead in the polls until you start to break those poles down by age groups, other demographics, suddenly Biden’s not looking so strong anymore. Other candidates start to look a little bit stronger in. Once we get to the debates in a month and a half, Biden’s going to look exceptionally weak, saying, let’s all play Nice. While every other person on that stage is spouting policy and ways to make the lives of American citizens better. Suddenly, Joe Biden’s let’s all hug it out, isn’t going to be so appealing to voters.