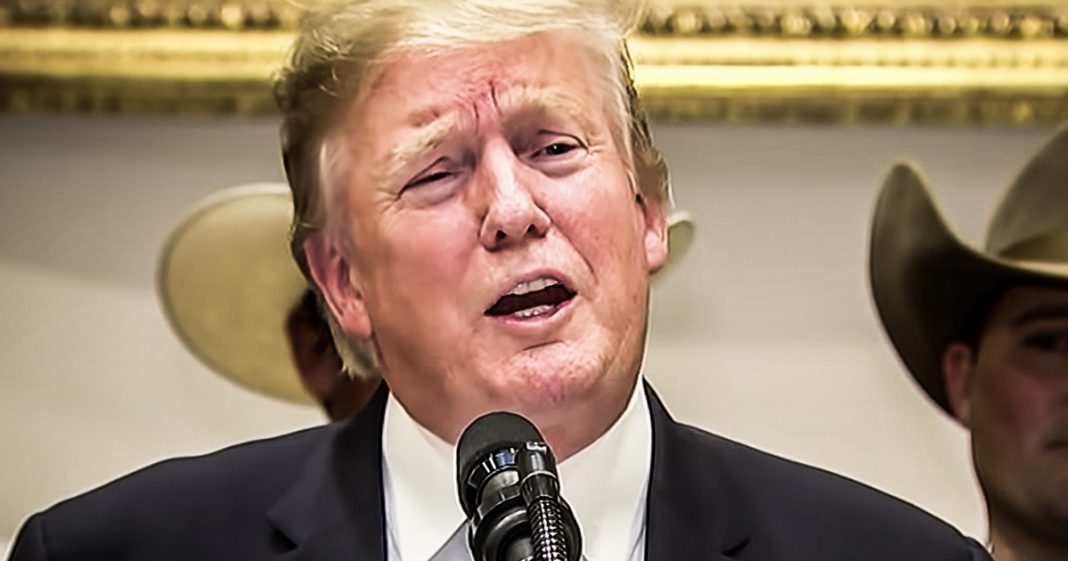 Donald Trump is very angry right now and he’s very angry about the fact that people think he’s very angry. Now, I know that doesn’t make too much sense, but believe me, nothing in Donald Trump’s brain makes very much sense at all. But here’s what happened. As we all know by now on Wednesday, Pelosi had this meeting with Donald Trump. They were supposed to talk about infrastructure. Chuck Schumer was there. Donald Trump came in, spent three minutes, got pissed off at Democrats because they won’t drop the investigations and do a him and his family and everything else. It showed that he left. Well, it was categorized classified as a temper tantrum. That’s what the media ran with. That’s what Pelosi said. That’s what we said, because that is exactly what it is. Donald Trump is pissed off about that. How dare you have the audacity to say that I got angry about something because you do.

But then yesterday, Thursday day after this, a temper tantrum happened. Donald Trump holds a press conference to announce that he’s going to waste a 16 billion of our tax dollars to bail out the farmers that he’s destroyed from his trade wars. But really, instead of talking about that plan, what he did, and you can find the clip in the link in the description of this video, he lined up his staffers. I mean quite literally, they’re standing in a line around him and one by one he made those people tell the reporters in the front of the room how calm and gentle he was during that meeting with Pelosi, just so every one of them individually could debunk the talking point that he threw a temper tantrum and he himself was standing at the podium, made it clear he didn’t ever raise his voice. He wasn’t pounding his fist on the table.

He calmly said some things Democrats can’t do two things at once. So I left the meeting and then immediately went right outside to a podium with a little placard made up, filled with lies about the Mueller report. This walkout, as I said yesterday, was 100% staged. There were reporters already waiting outside at a podium where he was supposed to be. He had no intention of staying in that meeting. None whatsoever, but nonetheless, this man’s ego is so fragile. His skin is so thin that he had to have each one of his staff members stand up and say, yes, I can verify the fact that Donald Trump was not an angry person. In fact, he was a calm person at the meeting. Thank you, sir. This is psychotic folks. This is not normal behavior for any human being and we should expect more out of the president of the United States.

Let me put it this way. If any CEO in this country, if any manager in this country, if any human being in this country ever feels the need to line up all of their friends and tell them, tell whoever that, hey, make sure you tell everybody what a normal guy I am. Yeah, you’re already not a normal guy at that point. If you have to line people up to say how great you are, you’re obviously not that great. Of course, though, at one point Donald Trump did during this little press conference that again was supposed to be about struggling farmers. He did take the time to say once again that he is in fact, a very stable genius because as we all know, everybody who is a very stable genius, you must repeat that, uh, periodically or else it no longer becomes true, right? You have to keep reminding people by saying it out loud, because obviously they can’t tell from your actions, right? Donald Trump is not stable. Donald Trump is not a genius. Donald Trump is not a good negotiator. And yes, Donald Trump threw a temper tantrum instead of meeting with Nancy Pelosi and Chuck Schumer.