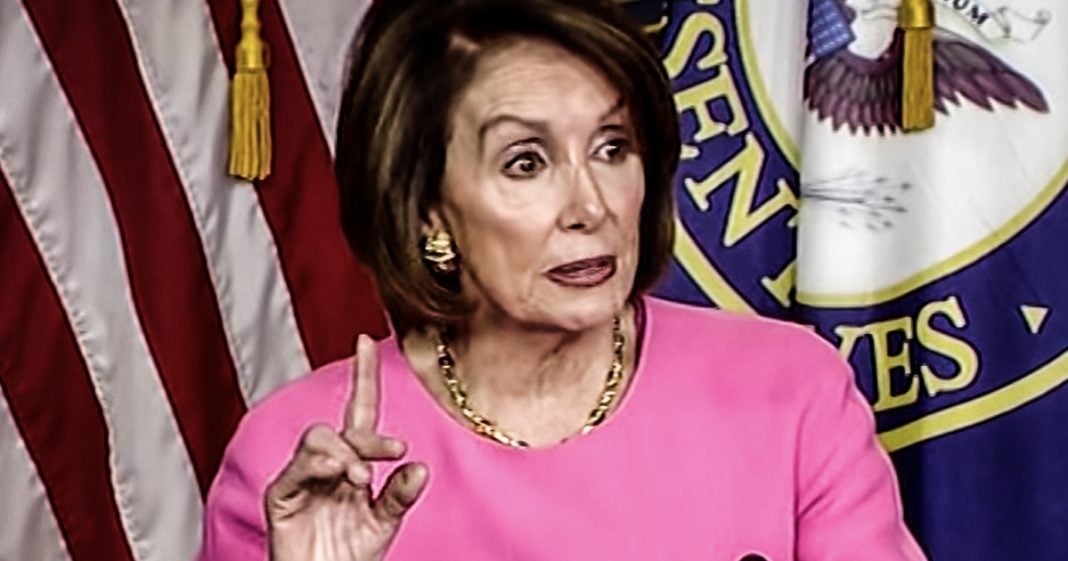 Donald Trump is doing his best to break whatever laws he can, but House Speaker Nancy Pelosi still says that we aren’t at the point of impeachment yet. Either Pelosi is playing some kind of long game that the rest of us are too ignorant to understand, or she’s too terrified to make a move against the least popular president in modern history. Ring of Fire’s Farron Cousins discusses the possibilities.

Nancy Pelosi’s getting a lot of praise right now for her. A clap backs to Donald Trump, both figuratively and literally, uh, but in the last 48 hours, you’ve seen a lot of folks say like, hell yeah. Pelosi’s putting Trump in his place. She is winning this. She’s doing everything correct except that unfortunately I’ve got to disagree with you on that. Nancy Pelosi yesterday, this was long after you know Trump stormed out of that meeting and did or did not have a tantrum depending on who you ask. Nancy Pelosi again yesterday said, you know what? He really wants us to impeach him, but unfortunately we’re just not on that path. This is what Nancy Pelosi told reporters on Thursday. She said, we can get the facts to the American people through our investigation. It may take us to a place that is unavoidable in terms of impeachment or not, but we’re not at that place.

We can get the facts to the American people through our investigations. Really. How’s that working so far for you? Because last time I checked, all of these cases are currently being held up in court. Donald Trump is not complying with the court orders that say you’ve got to turn it over. His people are not complying with subpoenas. You haven’t really taken any action on them. You haven’t held anybody in contempt. You haven’t sent the sergeant at arms to go and lock them up until they testify. So stop acting like your investigations are getting this information to the American public. What you’ve done is set up a string of legal battles that yeah, you’re going to win. We know that, but at the same time you could have just opened the impeachment inquiry and forced all this, uh, documents to be handed over to you immediately. You could have done that.

You should have done that. A lot of people in this country would like to see you do that. A lot of members of your own chamber would like to see you do that. Even some Republicans would like to see you do that, but you’re not. Now there’s two possible explanations for this one. Either Nancy Pelosi is playing some kind of long game and she’s got an ace, a personally that we do not know about and she could be playing everybody in this country to absolutely just lay it out six months, even one year down the road and then we all look like idiots for criticizing her. Honestly, I hope that’s the case. I hope that there is a time within the next six to 12 months when I have to come on here and say, Dang, Nancy played me. I totally thought she was being weak and wishy washy, but she knew exactly what she was doing and I have more respect for now than ever.

I hope I get to come back and say that there’s no part of me that thinks I’m going to have to come back and say that there’s not. There’s not. I’ve been doing this for too long. I have been covering Nancy Pelosi for too long. I’ve seen, I know what she’s about. A lot of us do because we’ve been in this game for a long time, folks. We’ve been covering politics for decades. We’ve covered Pelosi’s career for decades. This isn’t something she typically does, so my best theory here, not the long game. Again, I hope I’m wrong, I hope it is the long game. What’s more likely is that Nancy Pelosi is afraid. She is afraid that if they open an impeachment inquiry, it’s either going to rile up Donald Trump’s base or turn off more moderate voters. Either way it’s going to cost the Democrats the 2020 election because right now most people do not necessarily want impeachment, although those numbers are climbing higher every single week and to that, as I’ve said before, as many others have said, Nixon support for impeachment of Nixon wasn’t even half the country when the inquiry started.

By the time it finished, a majority of people did support it because of all the information that was coming out. Public opinion may not necessarily be on your side right now, which I actually do think it is, but okay. Even if you think it’s not, it will eventually be on your side. There’s nothing holding you back other than your own fear and less. Of course you are playing the long game and you’ve got us all hoodwinked, and my God, I hope that that is the case. I don’t think it’s the case, but I am in a hold out just a teeny little bit of hope that you’re playing all of us and you’ve got a plan to hold this man accountable for all the crimes that we already know he has committed.