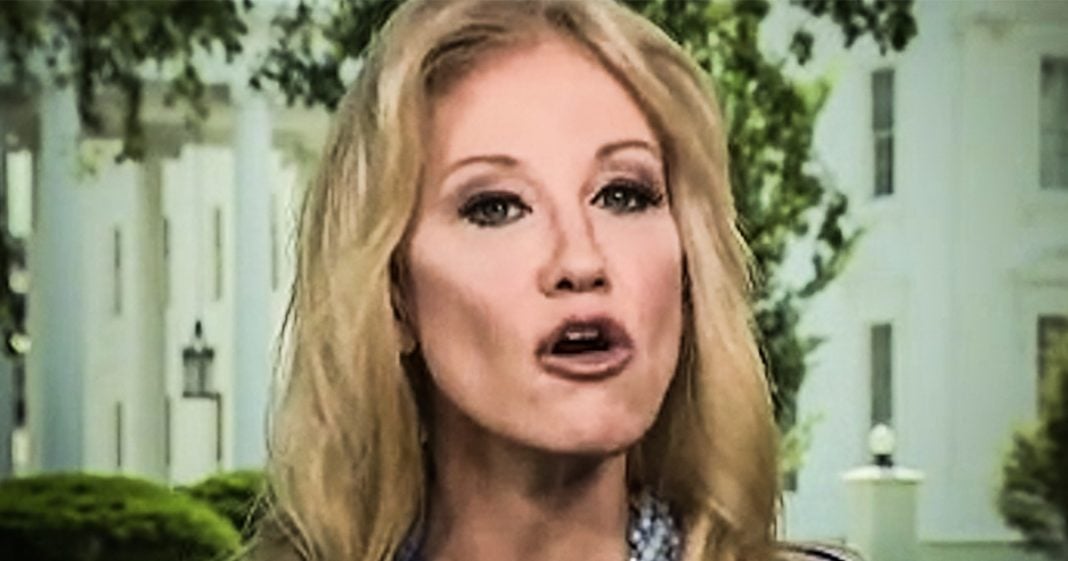 After their interaction on Wednesday, Kellyanne Conway was furious that Nancy Pelosi refused to talk to her, and she isn’t letting go of her anger. During an appearance on Fox News, Conway said that Pelosi treated her like a maid and therefore she was being anti-women. While Pelosi’s language may have been strong, Conway didn’t deserve Pelosi’s time at all. Ring of Fire’s Farron Cousins discusses this.

Kellyanne Conway:              Then speaker Pelosi, there’s nobody’s reported this yet, so I’ll give you some color. Then speaker Pelosi went on and launched into some odd south curated history of infrastructure in our country, shock about Thomas Jefferson. Then she got to Teddy Roosevelt and so when she was finished, I said, respectfully, Madam Speaker, would you like to address some of the specifics the president talked about and she said, I don’t. I talked to the president. I don’t talk to staff because let’s face it, she’s a six months, rich member of Congress. She treats everybody like they’re her staff. She treats me like I’m either her maid or her driver or her pilot or her makeup artists and I’m not. And I said to her, how very pro woman of you per usual, because she’s not very pro woman. She’s pro some woman.

Farron Cousins:                   All right, now let’s get something straight. I know yesterday I had said that I did not 100% agree with the way Pelosi said that to Kellyanne Conway. I had said yesterday that it would have been better for her to say something to the effect of, Hey, I don’t talk to liars. I don’t talk to people with alternative facts, so please leave me be. But instead she said, you know, I don’t talk to the staff. I talked to the president and to me that came across as a little bit elitist. So I can see that point to a degree. But the more I’ve sat here for the last 24 hours, kind of stewed on it a little bit like, hell yeah, why shouldn’t Pelosi act that way to Kellyanne Conway? She’s a horrible human being. She lies for a living. And let’s not forget, Nancy Pelosi is third in line to be the president of the United States.

Kellyanne Conway lies for money. They’re not even close to being on the same level. So yeah, if Pelosi gets a little snippy with Conway, I’d say that Kellyanne Conway deserves it. But again, Kellyanne doesn’t see it that way. She believes that Pelosi was speaking to her as if she were speaking to a maid. And then this is one of the most disgusting parts. In the full clip, she goes on to mention the fact that Nancy Pelosi’s the eighth richest member of the House of Representatives, and so she thinks she’s in lead-less. Listen, Kellyanne, you can’t knowing who you work for, say that somebody else’s in elitist because they make a lot of money. All right? Please don’t forget the fact that your boss has a golden toilet. It doesn’t get more elitist than that. So before you think about calling somebody else out for having money, just remember the fact that, uh, at least back when he was in Trump tower, I don’t know if he’s moved it to the White House or not, this man would wake up in the morning and go sit on 24 carat gold to do his morning business. And that is about as elitist as you can get.