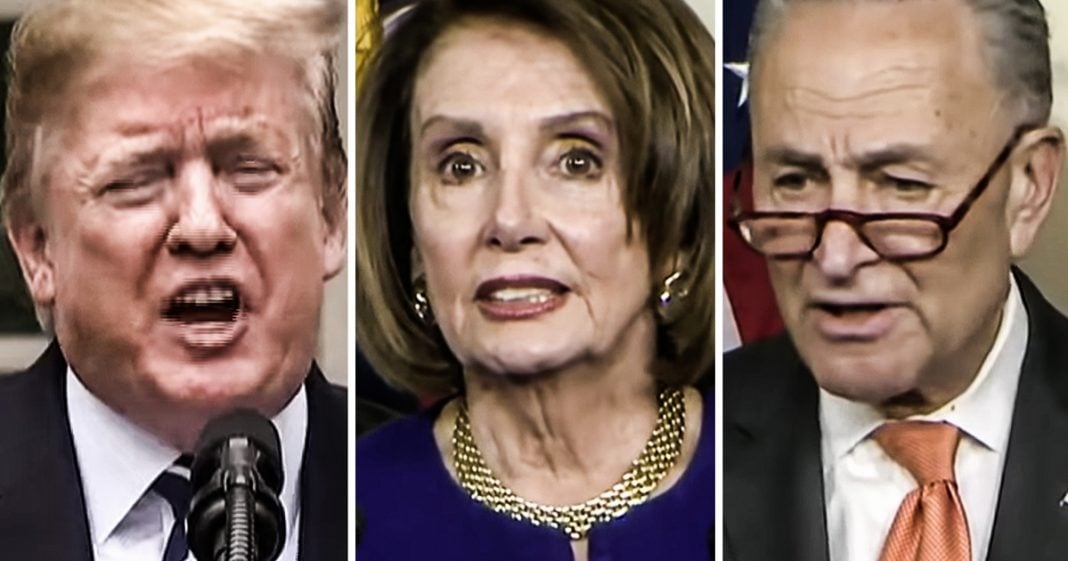 Donald Trump clearly doesn’t have the temperament to be President of the United States, and his lack of basic communication skills was on full display on Wednesday when he stormed out of a meeting with Democrats after only 3 minutes. Trump refuses to make any kind of deals or policy agreements with Democrats as long as they are investigating him, which just shows how much of a child he really is. Ring of Fire’s Farron Cousins discusses this.

And what was most likely a very orchestrated event. Donald Trump’s stormed out of a meeting with Democrats, Nancy Pelosi and Chuck Schumer yesterday. After spending less than three minutes with the Democrats and not letting them get a word in. Here’s what happened yesterday, Nancy Pelosi, Chuck Schumer headed over to the White House to talk to Donald Trump about a $2 trillion infrastructure package to repair the nation’s crumbling roads, bridges, and other pieces of infrastructure that had been neglected for about 20 years. Donald Trump has said he wants to fix the infrastructure. They thought for certain this was going to be an issue that transcended party lines that we could actually get done to protect Americans. Instead, Donald Trump walks into the meeting, immediately, starts lecturing the Democrats about all of their phony investigations, how he’s angry about it and how there’s no possible way they can both investigate him and work on legislation, but because they refuse to drop those investigations.

Donald Trump’s stood up, walked out and immediately headed into the Rose Garden where there was already a podium and reporters waiting for him and the podium had a nice little printed sign on it that said, no collusion, no obstruction. Then had some very fake statistics about the Mueller report because it didn’t mention the fact that technically the Mueller report turned a profit with all of them money they got from Paul Manafort. It didn’t mention all of the people who were indicted that were connected to Donald Trump knows just a bunch of lies. About 18 angry democrats costs you $40 million, no collusion, no obstruction, and it was already waiting for him there. As soon as he walked out of that meeting that was supposed to last. God knows how long. Certainly longer than three minutes though, and that is why I began by saying in what seems like a highly orchestrated event.

Trump knew exactly what he was going to do when he walked into that meeting. He knew he wasn’t going to stay. He knew. We already had reporters out there waiting for him where he could go out there and talk about the so called witch hunt with his little printed sign. You can’t tell me that his little temper tantrum walking out on those Democrats was not preplanned. It was. It just didn’t go the way he thought it would because yeah, the public’s pretty much ridiculing him right now and rightfully so for having yet another temper tantrum walking out of yet another meeting with Pelosi and Schumer because he didn’t immediately get his way. This man is supposed to be the expert negotiator. He’s supposed to be, you know, the art of the deal guy. Yet the second the other side won’t immediately cave into his demands.

He literally walks out in the meeting that may work in business. It doesn’t work in business, but we’ll give him the benefit of the doubt and maybe it does, but it damn sure doesn’t work in politics. Politics takes agreement. Politics does take compromise and typically the Democrats are a little over willing to compromise, but they weren’t this time and so good job for them. I’m sure next time they might cave a little bit, just like they eventually did with giving Trump a little bit of money for his border wall. Now there is a bit of a side story here too involving Kellyanne Conway and Nancy Pelosi. Conway came up to Pelosi after Trump stormed out and Pelosi tells Conway, I don’t talk to the staff. I talked to the president and then Conway talks to reporters and immediately says, wow, that’s very pro woman of you.

So they had their own little bickering Fez. And to be honest, I don’t agree, uh, with the tone that Nancy took with Conway, but at the same time I understand why she did. You just maybe should have phrased it a little differently. Instead of trying to say that Kellyanne Conway was beneath you, you could have said something like, I don’t talk to people who make things up. I don’t talk to people who use alternative facts. That would have been much better than saying, I don’t talk to the staff. You know, just a simple linguistic change there so you don’t come across as some kind of elitist. Nonetheless. Uh, Conway got pissed. But overall, it’s Trump. Trump, who’s angry because according to the Wa, a New York Times, excuse me, uh, Trump’s been pissed off all week. He’s been angry since Monday, according to staffers inside the White House, yelling at them, lashing out at them because he’s having a really bad week. He has lost two major court battles this week. He didn’t get an infrastructure deal. He didn’t get Democrats to drop their investigations. He’s polling at about 38%. A new poll came out saying only about 60% of the country, uh, doesn’t want him reelected. So you’ve got maybe 40 who say, sure, he could be reelected. 60% are saying, no, you’re not getting a second term. So yeah, bad week for the president. And I can’t think of a more deserving person to have such a god awful week.