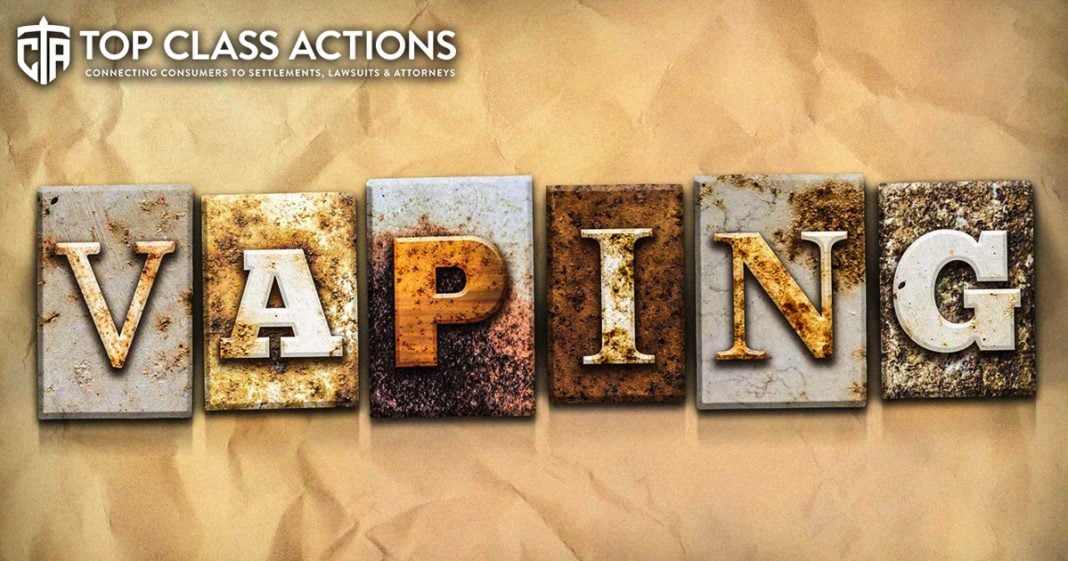 The use of e-cigarettes has been linked to the onset of seizures, which is a known side effect of nicotine toxicity, the Food and Drug Administration is reporting. The FDA has issued a safety communication stating that there are 35 reported cases of seizures in which e-cigarettes were a factor between 2010 and the beginning of 2019. Most of the cases reported involved youth or young adult e-cigarette users. Ring of Fire’s Farron Cousins discusses this with Scott Hardy from Top Class Actions.

Scott, we’ve got two different investigations to talk about here. Let’s start with the first one. We’re talking about JUUL pods. JUUL pods, according to the FDA, have been associated with at least I think 35 seizure events in the last 10 years. Something around that timeframe. Tell us about this one. What do we know so far?

It’s not a big deal when in fact each JUUL pod actually contains the nicotine of an entire pack of cigarettes. And so if you’re sucking down that JUUL pod, your body is taking a huge hit of nicotine in a very short amount of time. And that’s what the FDA is really concerned about here is that you’ve got, you know, people and teenagers that are now vaping thinking that they’ve just got this great fruity gumdrop that they’re sucking into their lungs and that it’s not causing a problem.

When in fact, as you said, the FDA is now connected this to seizures, death and other problems because of a nicotine overdose. And I’m not making these things up. This is absolutely true because if you, if you force yourself to suck down a pack of cigarettes, you will be coughing. You will be struggling. You will have a, you know, your body will say, no, I can’t handle the smoke and therefore you won’t get that, that nicotine overdose.

But if you’re vaping, it’s a lot easier just to continue puffing away and getting all of that nicotine in your system without the negative impact of your body trying to cough and cough and cough. And that’s how you can have these problems with the, a seizure that’s directly contributed and affected by smoking or vaping. Sorry, I keep saying smoking. Vaping these JUUL pods and a friend of mine, sorry, go right ahead.

Farron Cousins:                  I was gonna say, you know, you hit on a point that I want to elaborate a little bit more is the fact that cigarettes essentially have a way of letting you know that they’re destroying your body. You know, you get the burning in your throat, the burning in your mouth. If you want to sit there and smoke, you know, four or five back to back to back, you start to feel it. It’s uncomfortable, it’s unpleasant, and it prevents you from being able to overdose because you’re not going to overlook that.

You’d be like, I can’t do this anymore. It hurts. It physically hurts. A lot of these vapes, they don’t produce any of those results. There is no burning. There is no coughing. You know, there’s no dryness that happens in your mouth. I’ve done both. Trust me, I know. And so, wow, this is super. It’s like breathing in air. It’s perfectly wonderful and great, but you’re sucking in so much nicotine and your body’s not letting you know immediately that hey, bad things are happening inside of me. Can you please knock it off?

You get that with cigarettes. They tell you right away that bad things are happening in your body. We can’t keep doing this. The vapes don’t. And that’s where a lot of these problems come from. That’s why we have these overdoses because your body’s not immediately letting you know something’s wrong.

Scott Hardy:                          Exactly. I mean cause a lot of friends that used to be cigarette smokers, now they’re vaping and some folks have found that they’re actually vaping more because they think is, it’s a, it’s a much healthier option and it is healthier than smoking cigarettes, but it is not healthy. That’s the thing is that the, the JUUL pods, if you, if you’ve got, if you’re vaping and you’ve got your vape juice, this stuff is not just water.

There are chemicals in there, there are carcinogens in there, which is bad for you. And I remember as a kid, and I think probably freshman year of high school, sitting at the bus stop and smoking a clove cigarette with a friend that’s as smoking. I’m like, ooh, and I’ve got asthma, so it was especially stupid. But I’m sitting there puffing on this little clove and it’s so sweet and tasted so good at my lips and I’m going, wow, this is great.

And then I got angry a couple of years later when clove cigarettes got shut down, essentially because you know, they’re being marketed to kids, they’re being marketed to young adults and these things are, are, are, are hurting people. And now you’ve got e-cigarettes and JUUL that have the same tasty yummy flavors that are saying, no, no, we’re not marketing to children. Come on, these are, are fruit punch flavors. Who are you going after?

And we’ve seen that, one of these studies here where the, where you’ve got, you know, e-cigarette usage that is just completely skyrocketed in middle school and high school. And they asked them, what do teens think is in their e-cigarette? 66% think that it’s just flavoring, 66% thinks it’s just flavoring. They don’t know anything about the carcinogen’s. They don’t know about the nicotine that’s causing them to be addicted to it. They have got no idea.

And so now all of a sudden I’m the grumpy old guy saying, wow, we really need to take a look at how these things are being marketing and the flavorings that are being added to it that make kids love it. That gets kids hooked now and JUUL’s specifically as you and I have discussed is now owned 30% by big tobacco. So they’re in the vape industry now, big tobacco is here to stay and they don’t want to leave.

And they’re introducing legislation across the country, state by state, by state to try to let this, have the states regulate it in a way that allows them to control. It’s their lobbyists that are putting in this vape legislation because they’re trying to do a good deed. When, because they don’t want the federal government to shut it all down and say, hmm, you can’t go ahead and have cotton candy as a flavor that my 10 year old would like to try.

But right now we also have the other one that’s a lot easier to figure out and that is nicotine poisoning, which as we pointed out, has a lot to do with the fact that one, people don’t know what’s in these things. There are no long term studies because they have not been available long term. And I say it like that because I get furious with the people insisting that this stuff is perfectly safe. We don’t know yet.

We know there’s carcinogens in it, but nonetheless, I’m getting off track. The nicotine levels are absolutely astounding in these things. Your body consumes more of it. So suddenly has to process this nicotine in a way that in many users, especially first time users, your body’s never had to process nicotine. Your body has never had that amount of stimulants go inside of it at once and suddenly your body starts acting weird, acting funny. You go into full blown nicotine poisoning and that’s this other investigation. Quickly lay this one out for us.

Scott Hardy:                          Sure. So we’ve got one investigation that’s looking for people that, that had a family member or a loved one that suffered a seizure after your, you know, using JUUL pods or some other kind of vape. Specifically we call out JUUL pods in this investigation because that’s what the vast majority of people are using out there, especially young adults. The other investigation is really focused on addiction and we want to be talking to people.

If your kids became addicted by using a JUUL or other vape products, you know, because we’ve see that huge spike in middle school and high school use of vape products where these kids don’t know what they are and what’s in them. And they just think they’re just vaping and they’re having fun. They’re getting a little buzz. Not knowing that that nicotine is, is putting a hook in them and in their brain that they’re going to keep using it.

Farron Cousins:                  And one of the things that people need to understand too, with the increase in the number of children getting hooked on nicotine, when you get hooked on it, basically anytime before the age of 25, it actually alters your brain structure. It alters your brain chemistry, forcing you to basically become more addicted than someone who started after the brain had completely finished developing. So there is a greater risk.

It is a greater lifetime risk at that point because their brain was essentially developed to already crave that chemical nicotine. For more information on either of these investigations, follow the links in the description of this video. Go to topclassactions.com, while you’re there, sign up for the weekly newsletter. Get all of these stories and more delivered directly to your inbox. Scott Hardy, Top Class Actions. Thank you very much for talking with me.