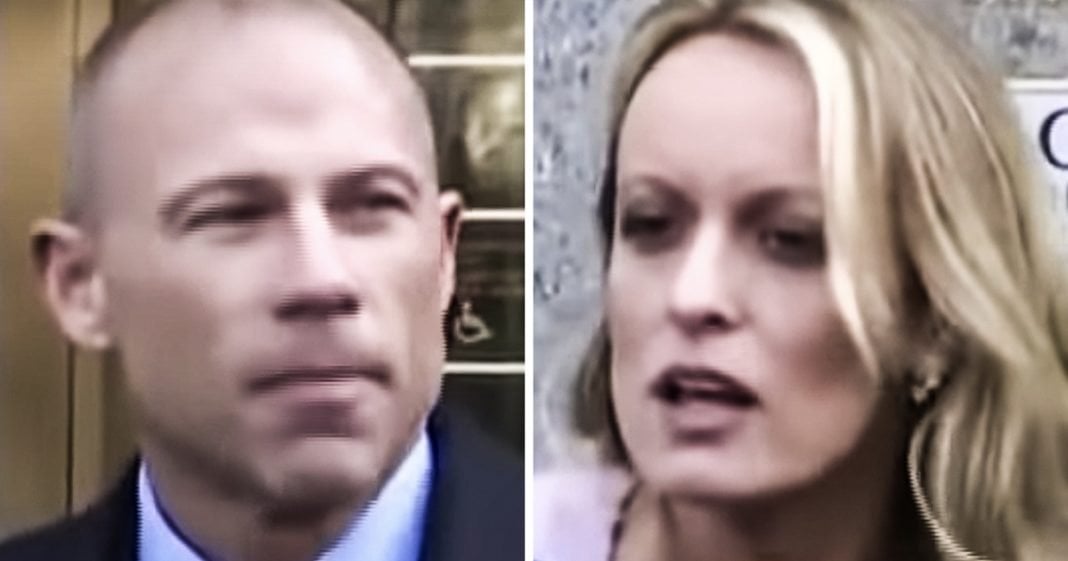 Attorney Michael Avenatti got hit with even more charges this week, this time for allegedly stealing money from his client Stormy Daniels (Stephanie Clifford.) Avenatti has been accused of using a phony document to take as much as $300,000 from book sales from Stormy Daniels that he used for personal expenses. Ring of Fire’s Farron Cousins discusses Avenatti’s fall from grace.

Do you remember a few months ago when Michael Avi Naughty, the attorney for Stormy Daniels was actually considering running for president as a Democrat when he was out there on Twitter telling us that the next Democrat, the most important thing is that they’re able to beat Trump. You know, to beat him up pretty bad in a debate to be strong against him. And I am that man. Yeah. Well this week he was actually popped with some new charges and the new charges that Michael Avenatti now has against him or that he actually stole money from Stormy Daniels last year. Here’s how it happened.

According to the charges, Stormy Daniels last October, I had a book coming out, a book deal that was going to give her a couple of million dollars. Michael Avenatti prior to the release had her sign a fraudulent document that basically gave him a lot of the money, most of the money. So then when the money was supposed to come in October when the book came out, the money went to avid naughty first and he never gave it to her according to the charges. So then in December, two months later, she’s finally like, we need to get them to release this money to me, to which Michael Avenatti said I’m working them and threatening litigation, but I still don’t have anything. Was it? Turns out he did and he’d had the money for two months and he spent more than $300,000 on his own little personal expenses of pet projects and all that kind of stuff. He lied to her. The woman he used to make himself famous to make himself the hero of the so called resistance to Trump. And he’s over there stealing money from her.

Michael Avenatti is 100% a grifter and he is one of the reasons why lawyers in this country are viewed in a negative way because he represents everything that is wrong with the legal profession. But I gotta tell you there’s not a bunch of Michael Avo naughties out there and the fact that he is finally getting popped, he’s getting popped for trying to extort millions from Nike, uh, from uh, all of his coffee shop nonsense out there in California, which those charges if convicted, could carry as much as 300 years in jail. I’m glad this is happening to Michael. Avenatti because he gives the entire legal profession a bad name. He is absolutely now one of the worst of the worst. At one point in his career, he could have been great. He could have absolutely been a strong advocate for consumers here in the United States. But instead the second he got a little taste of money.

And then a little while later, a little taste of fame, he realized those were the only two things he cared about. It was no longer about the consumers. It was no longer about protecting plaintiffs. It was money and fame. That’s the only thing Michael Avenatti wanted. And after we got those two things, we started seeing that he wanted power as well. And that’s why he was kicking around. The idea of running for president Michael Avenatti is absolutely one of the biggest resistance grifters out there, and I am glad that this man is finally facing the punishment and the consequences for this massive grift that he pulled, not only on the American public, but on his own personal clients as well.