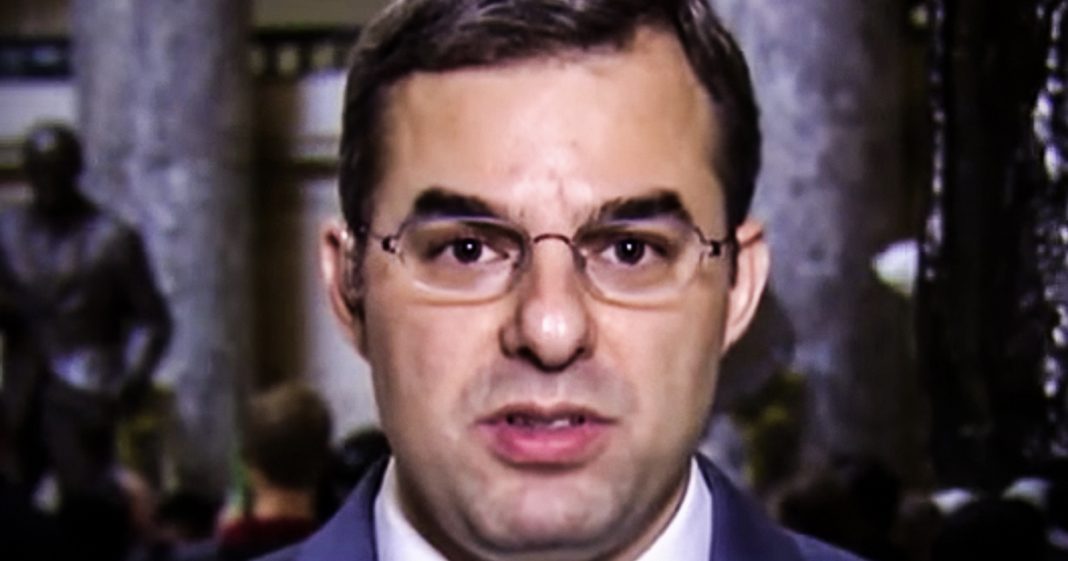 Republican Congressman Justin Amash made waves last week when he said that Trump committed impeachable offenses, and now he says that behind closed doors there are a lot of Republicans in Congress who agree with him. So why won’t these cowards come forward? Will they vote to impeach if the Democrats take the first move, or are they going to vote against it but secretly hope that it passes? Ring of Fire’s Farron Cousins discusses this.

Republican representative Justin Amash made waves this past week when he said that he read the entire Mueller report top to bottom. And so that, yeah, Donald Trump absolutely did commit impeachable offenses specifically related to obstruction of justice. Donald Trump accused of marsh of not actually reading the Mueller report and Amash says, no, I read it all 400 plus pages, every single word of it. And that’s how I came to this conclusion. Well, yesterday during an interview with CNN representative, a mosh said that, hey, I’m not gonna give any names, but there’s a lot of republicans behind closed doors that are warming up to my idea of impeachment. Yeah. There’s a lot of Republicans who say, wow, I need to go back and reread this. You’re, you’re a good guy. You’re an honest guy. Let me go back and reread this and maybe find what you found. And then I’m totally on board with this. The reason I am talking about this story today is because I don’t believe a single word of it, not one word. Sure. Maybe there are republicans behind closed doors telling Justin Amash that, hey, I secretly support you and I think in peace, what would be awesome, but none of these people are gonna gonna vote for it. None of these people are going to do anything about it.

If they’re only willing to say it behind closed doors, then they’re cowards. If you think the president should be impeached, show a little bit of courage. Go out there, do an interview and say, you know what? I took Justin and Matias and vice. I read this report and I believe 100% the president should be impeached now for obstructing justice, but they’re not going to do that. They’re going to hide. They’re going to cower down, and if it ever were to come to a vote, they would vote to not impeach the president because they’re too terrified of him and don’t want to get on their bad side. But that scenario is only if Justin Amash is telling the truth and I don’t think he is. I think now the reason that Justin Amash is coming out and saying, I think the president should be impeached, is because there’s now rumors floating around that Amash who leans more libertarian than Republican might actually be seeking the 2020 libertarian nomination to run against Donald Trump in the presidential race.

That and especially cause Amash has not ruled that out, so it’s something that maybe he is willing to do according to him. I think that’s what’s behind all of this. I think a mosh wants to run as a libertarian. I think he wants to take away some of those moderate Republicans who do not like Trump, but support republican policies. Well, hey, vote for me and send him a message. A marsh would absolutely help split a little bit of the Republican vote off of Donald Trump should he run as a Republican, but is it enough to let whatever Democrat gets the nomination easily sail through to an electoral victory? That’s the big question, and I do not know that Amash we’ll be able to pull enough to be able to do that, unless of course you put up a good, strong democratic nominee, but if you’ve got a Biden, you’re looking at an exceptionally close race, and I don’t know that Amash could shave enough republicans off to send a Biden to victory. Nonetheless, this guy wanted attention. He’s getting attention. If he was serious about his impeachment push, he’d already be drafting the article’s himself, but he’s not, because all he wanted was a little bit of attention. He wanted that spotlight on him. He wanted people to know his name, name, and he’s succeeded in that. Now we’ll see where that takes him.