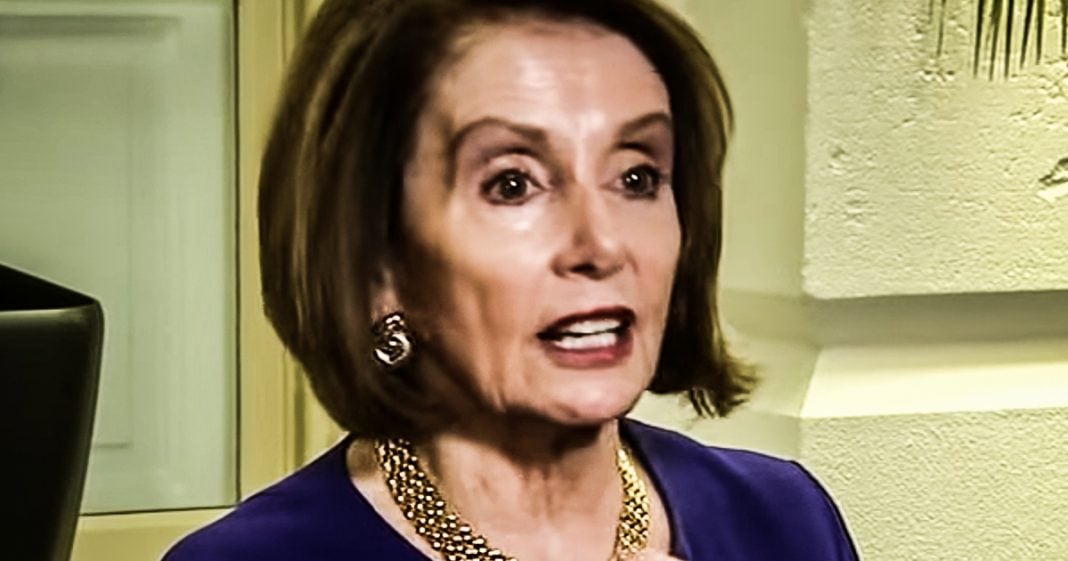 House Speaker Nancy Pelosi has been reluctant to talk about impeachment, even among her fellow Democrats in Congress. But the calls for impeachment are growing too loud for Pelosi to ignore, and she has agreed to meet with Democratic lawmakers behind closed doors today to talk about their options. This could be a big step forward, or it could show us that we have the wrong people in leadership positions in the House. Ring of Fire’s Farron Cousins discusses this.

Nancy Pelosi and other leadership in the House of Representatives on the democratic side have been a little slow to acknowledge all of the Non Leadership Democrats in the house saying that it’s time to begin impeachment hearings. Well, finally, in fact, it was actually after the Republican Representative Justin Amash came forward last week and said, I think Donald Trump could be impeached. He has obviously committed impeachable offenses. Uh, after that, Nancy Pelosi finally decided, all right, you know what Democrats? I’m a throw you a bone here. We’re going to have a closed door meeting, which is taking place today to talk about impeachment.

Not going to have any reporters there. It’s not going to be public. It’s going to be behind closed doors, but I’ll let you have your say about impeachment. Now. On Monday, Nancy Pelosi insisted that the Democrats are not going to do this or we’re not going to talk about it. Oh, we have plenty of other options. She said, in fact, one of those options that she laid out in ABC interview on Monday was if these people from the Trump administration continue to ignore our subpoenas in our requests, maybe we’ll find them.

Okay, maybe we’ll charge them some money because they’re not cooperating. That’ll show them. When Nancy Pelosi was selected to be the speaker of the House of Representatives, there was a lot of, uh, internal strife, I guess you’d call it, within the Democratic Party. You had plenty who said, listen, Nancy Pelosi was speaker of the house before, she wasn’t exactly the tough as nails kind of person that we needed sure as hell may not be the toughest nails person that we need right now. And since then, Pelosi has had some brilliant, wonderful moments. She’s also had some, uh, hugely embarrassing ones where she has shown that she is more willing to take the side of Republicans than she is her own Democrats in the house trying to do things like the green new deal, which Nancy Polosi openly mocked. But with this impeachment thing, this is the real deal. The time for foot dragging is over.

And you do have very prominent members of the democratic leadership in the house who are also calling for impeachment. They’re just not the leaders that Pelosi’s actually listening to. So she’s going to throw Democrats of bone. We’re going to have this little closed door meeting. But Nancy Pelosi, I don’t think has any intention whatsoever of going forward with impeachment. And here’s the thing, we know, obviously Democrats don’t want to do impeachment right now because they’re worried that the public is going to get mad at them. Well, here’s the thing. When impeachment began against Richard Nixon, most of the country didn’t support it. They didn’t want it to be happening.

But as it continued more and more until you reached a, a good majority of the American public did approve of it and thought it was. And that’s what I’ve been saying. You start it now, public opinion will eventually come onto your side. And to be honest, this isn’t even necessarily about impeaching the president. It’s about beginning the process so that you can get information that they are stonewalling from you. That’s the point. But Nancy’s idea instead is, oh, let’s issue them a fine. Yeah, because that works so well as punishment for corporations who poisoned tens of thousands of people. Yeah. Don’t put him in jail. We just find them. It never works. Fines don’t work. What works would be to take somebody like Don McGahn who just ignored the subpoena, charge him with contempt of Congress, send the sergeant at arms to lock them up in the tiny little jail underneath the house of Representatives, and then I bet he’ll start talking pretty quickly or conversely, start the impeachment process and then they can’t hide all of these documents from you that we desperately need to know about. Either way, Pelosi’s track right now is wrong, and hopefully this closed door meeting is going to open her eyes and make her realize that impeachment has to start.