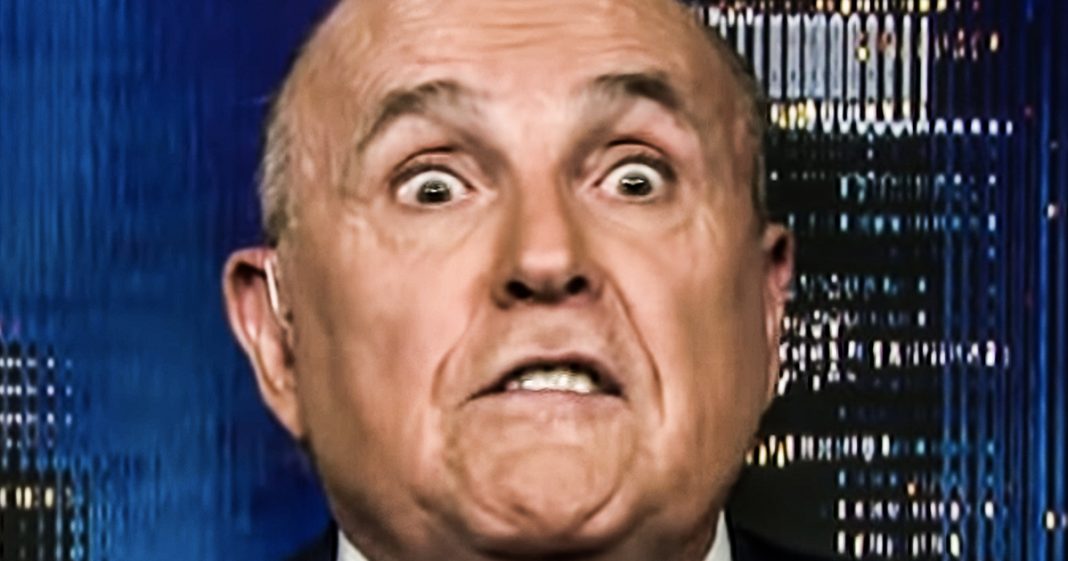 One of his lawyers is currently in prison, another routinely implicated the President in more crimes whenever he’d go on TV, another is being accused of suborning perjury, and all of this adds up to one thing – Donald Trump picks the dumbest lawyers in this country. His legal defenses are getting smacked down in court and his lawyers have no clue what they are doing. Ring of Fire’s Farron Cousins explains what’s happening.

Donald Trump may have the dumbest attorneys in the United States of America, and that actually includes both past and present. I mean, let’s look at the facts right now. Donald Trump’s longtime attorney slash fixer Michael Cohen is currently in prison. Rudy Giuliani, the guy who was supposed to defend him from Robert Mueller, would go on television and implicate his client, Donald J. Trump the president in further criminal activity. And so eventually they had to pull Giuliani off TV. It said, you can’t do any more interviews because you’re in idiot. So they admitted that guy was dumb. Then you have Jay Sekulow, another one of Donald Trump’s attorneys who it’s now been revealed according to Michael Cohen, uh, tried to suborn perjury by telling Michael Cohen to lie to Congress about the dates of the Trump tower. Moscow talks that that’s illegal. But that’s another one that Trump’s attorneys and we all know that they’re not afraid to do illegal things. And that’s just the past. Let’s talk about the present. Earlier this week on Monday, in fact, you had Donald Trump’s legal team gets smacked down by judge Amit Mehta, who told them that their argument against releasing Donald Trump’s financial records to congress was completely bogus. And it flew in the face of the US constitution because Trump’s lawyers went before this judge last week. We discussed it when it happened and said, listen, we know Congress wants to get Trump’s financial records, but it’s not related to legislation and Congress’s job is to legislate so they can’t have them.

And at the time the judge even said, then he said, that’s that, that’s not the only thing congress does. Do you really not know what Congress does because they have oversight authority of the executive branch. And by your own logic, the Watergate investigation never could have happened because technically that which was started by Congress didn’t pertain to any legislation. So yeah, I don’t buy your argument argument, but I’ll take a few days to, uh, you know, think about it before I issue my judgment. Judgment came down Monday and he basically reiterated the same thing you said. Yeah, you need to learn what Congress does because they have the authority to do this now hand over those documents. But this is a pattern that we have seen with Donald Trump. You know, I, I love the fact that he has told us repeatedly that he only hires the best people.

But I guess that only extends to anyone who’s not working on one of his legal teams. It’s probably the reason why all of his other policy, uh, lawsuits that they’ve had, the defendant court, why they have a 90% losing rate when they try to defend their own policies coming out of this administration, Trump a legal loser, and he surrounds himself with other legal losers. I mean, I don’t care where these folks went to school. I don’t care what their GPA is. It’s very evident due to the fact that the president continues to lose pretty much every single case. That these are bad lawyers and they’re making horrid arguments that they know they have to know are false saying congress, their only job is to legislate. I mean, come on, fifth graders learn what congress is supposed to do and they know that oversight is one of them, even if they don’t even know what the word oversight means.

But I guess Donald Trump’s attorney skipped that day in elementary school, right? Because they literally tried to tell a court that if it’s not related to legislation, Congress can’t seek any documents. And the best part about this is that Trump doesn’t even understand how stupid his lawyers are. I mean, from the beginning, going back 20 years to when he first hired Michael Cohen, these are not intelligent people. These are not hugely successful, wonderful lawyers. And every time he leans on them, they let him down. And I hope that this trend continues for the president because the last thing we need right now is him hiring an actual good attorney who knows what the hell they’re doing, and more importantly knows how to win cases. I would rather him stick with these absolute losers that he, for some reason, seems to love.