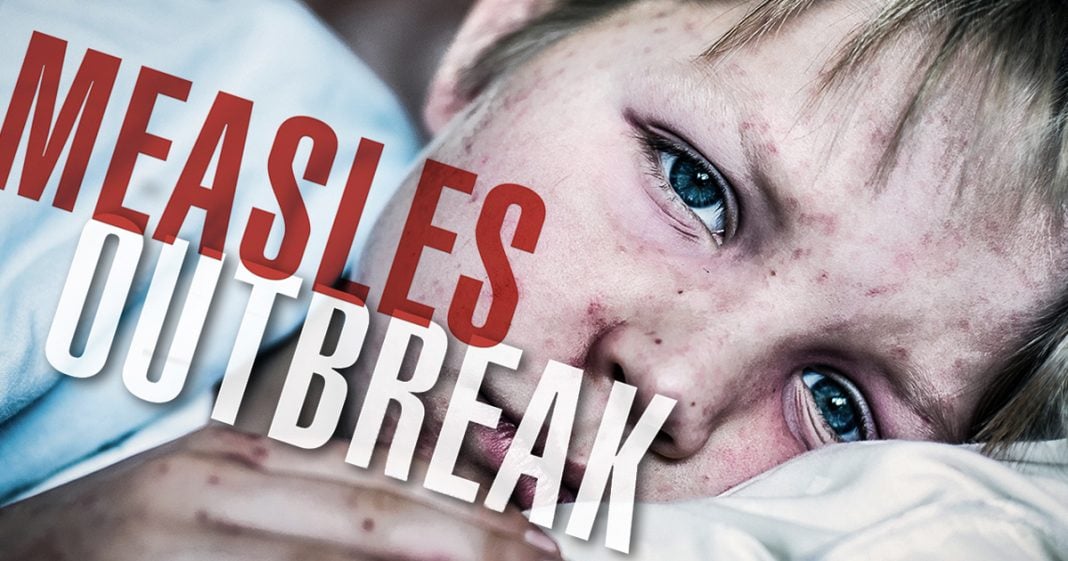 The number of Americans with measles has now increased to 880, with this mini-epidemic now spreading across 24 states. This is what happens when a group of people ignore science and choose to follow people who are complete frauds. The science is clear – vaccines are safe and necessary, but too many anti-vaxxers choose to ignore what science is telling us, much like those who deny climate change. Ring of Fire’s Farron Cousins discusses this.

So here’s some horrifying depressing news to share with everyone. The measles outbreak has now spread the 24 states in this country. 880 confirmed cases up 41 new patients from just last week. So right now a disease that we had officially declared declared eradicated in 2001 or excuse me, 2000 we as a country said, guess what? We have killed measles for good in this country now, yes, we had a few outbreaks since then since we declared it dead. But overall, those were exceedingly rare. A couple of cases here and there for the last 1718 years and suddenly because this anti-vaxxer movement has gained so much steam in spite of a complete lack of evidence to support any of their claims, we now have almost half the states in this country that have at least one person with a confirmed case of the measles. And yes, folks, this is the fault of the anti-vax or movement.

This is a movement that I have zero respect for and absolutely believe that they are causing irreparable harm to this country. Because in case you’re not aware of this, in case you don’t know how measles works, measles, uh, what it does to your body in addition to, uh, the disease itself, it also basically wipes out the memory of your white blood cells. So other diseases that you may have been immunized for or you may have gotten, and therefore we’re immune to, you’re no longer immune to those either. That’s actually part of what measles does. It wipes out your body’s, uh, antibodies. So it makes you more prone to getting other diseases later down the road, even if you had already been immune to them. So measles is kind of like the anti-vaxxers of the anti-vaxxers because it wipes out all the immunity you already had in you.

But here’s the thing, and this is the most important thing to know about the anti-vaxxer movement. They’re no different than the climate change. Denialist absolutely no different whatsoever because there is no scientific research available at all, not a single piece of it that suggests that vaccines cause harm. More importantly, the guy who made the link, uh, Dr Wakefield, Andrew Wakefield, who said that, oh, there is a link between vaccines and autism. Yeah, he was discredited because he made it up. He was stripped of his license and is known as a total fraud in the medical community. And that was the only piece of information that anti-vaxxers had that gave them a little bit of clearance to spread their phony claims. Except now we know it’s also a total fraud. It’s true. It’s not accurate. No scientific, good body researcher, human being whatsoever has been able to replicate those results that Wakefield allegedly came to even a study put together by anti-vaxxers themselves prove that vaccines are okay. And another point, which we’ve hammered on before is that anti-vaxxers actually think that somehow having a kid with autism is worse than having a kid with “dead.”

That is insulting and disgusting. But so is the anti-vaxxer movement. And I make no apologies for saying that because all of the scientific evidence available shows that vaccines are good. They do not cause autism. In fact, if you learned a little bit more about science, you would understand that that is scientifically impossible to do, but you did succeed in one thing. You brought back a disease that we had officially as a country declared dead 19 years ago. So I guess you got that going for you.