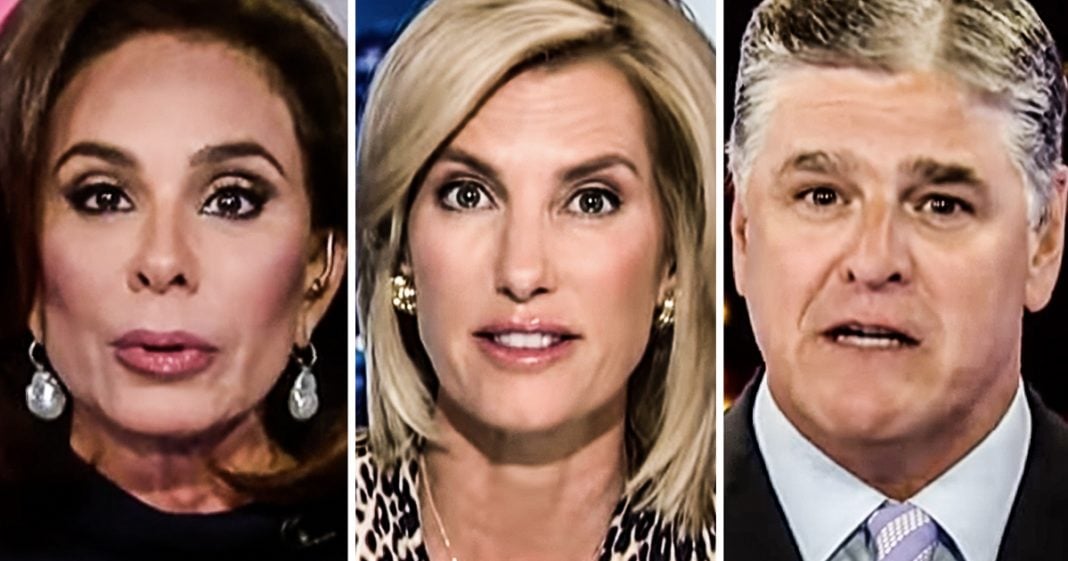 According to a new report by Media Matters for The Daily Beast, Fox News hosts are making hundreds of thousands of dollars speaking at events for Republican candidates, administration officials, and other Republican officials. Many other networks actually ban their on-air talent from doing this, but Fox News appears to have no problem with the lack of separation between their hosts and the Republican Party itself. Ring of Fire’s Farron Cousins discusses this.

On Monday, the daily beast published the results of a new report by media matters, which was shared exclusively with the daily beast, but there’s new report shows that Fox News personalities, including some of those who are not opinion hosts, just hard news hosts are basically all in the pocket of the Republican Party. What this report shows is that over the last couple of years, Fox News hosts have pulled in more than half a million dollars speaking at Republican events for Republican candidates and hell even for the Trump administration and their officials themselves. Now, what’s interesting about this is not the fact that we now know for a fact Fox News is in the pocket of the Republican Party, or maybe it’s vice versa. Who knows? At this point, we’ve known that Fox News has always been and likely will always be a mouthpiece for the Republican Party. What’s interesting about this is that Fox News itself claims that they have a policy to where they’re on air personality, they’re on air.

Talent cannot get involved with politics. In fact, every major news outlet actually has that same rule. You can’t do it. That’s why you never saw a Rachel Maddow go out there and give a stump speech for Barack Obama. But Fox News, even though they claim they have that policy in place, clearly doesn’t care. Here’s a few examples of what happened. Uh, in 2017, The Five co-host Greg Gutfield earn more than $36,000. Speaking at a Washington Republican Party fundraiser we can host Jeanine Pirro reportedly made 35,000 at a fundraiser for Pennsylvania Republican gubernatorial candidate Scott Wagner in 2018 fox and friends weekend host a Pete Hegseth made close to $20,000 on a series of speeches at official fundraisers and events for Republicans.

In 2018, Laura Ingraham was revealed to have been paid $12,500 slow cheap, isn’t it? In 2016 for an event addressing the Sangamon County Republican Central Committee. Good God, Laura Ingraham. What the hell? All these other folks are pulling in $30,000 for speeches. You’re a more well known name and you’re getting $12,000 to go speak at some local Republican club. Come on, do better.

Nonetheless, seriously, Fox News is inseparable from the Republican Party. They are an extension of one another and at this point, honestly, I don’t know which one’s actually in charge. Is it Fox News telling the Republican Party what to do or is the Republican party telling Fox News what to do? I’m inclined to think Fox News or actually probably the people in charge at this point, and it’s obvious, but what should be obvious to everybody in this country regardless of party affiliation or choice of cable news outlet, is that Fox News as being dishonest with you every single day. Fox News is not an outlet that is known for reporting the truth. And I know for years and years and years they had their slogan of fair and balanced, but they have never been anything close to fair or balanced. They have since day one, but a mouthpiece of the Republican Party of the United States of America. And I doubt that it’s ever going to change. And as long as they keep intertwining, you know, business and pleasure, they’re always going to be mouthpieces and they’re always going to get paid a hell of a lot of money to do it, except apparently, of course, Laura Ingraham, who I guess has a really horrible agent.