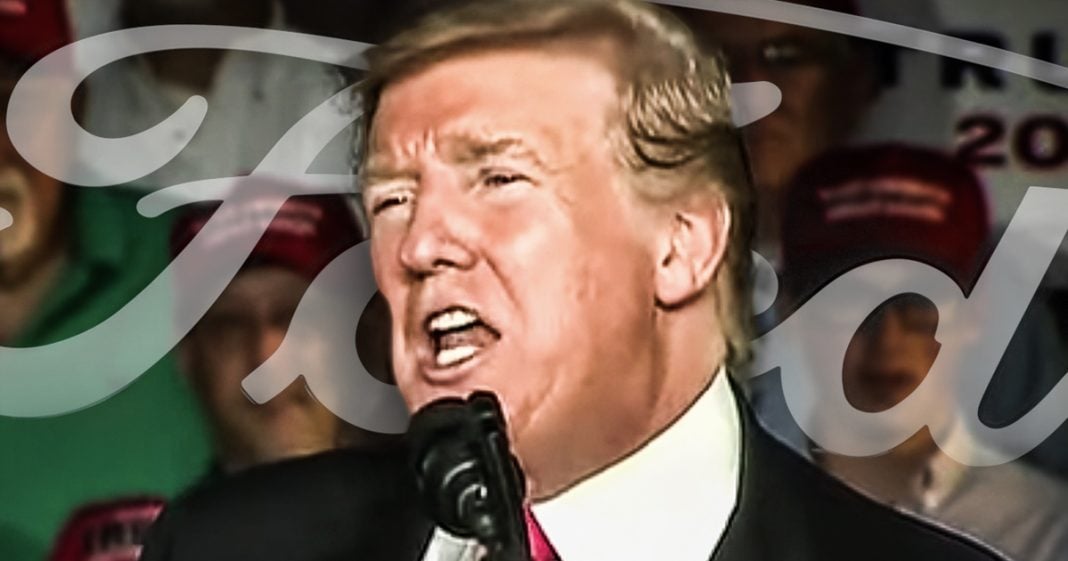 Donald Trump held a rally in Pennsylvania this week, part of his plan to try to shore up his working-class voters before the 2020 election. But shortly before the President took the stage, Michigan-based Ford Motor Company announced that they were laying off 10% of their salaried workforce totaling thousands of jobs. The President said that he is keeping jobs in this country, but the decent-paying jobs are disappearing. Ring of Fire’s Farron Cousins discusses this.

Donald Trump had to do Pennsylvania on Monday to give another one of his rallies, but shortly before the president and departed for Pennsylvania, Ford Motor Company announced that they were going to lay off roughly 7,000 workers across the globe, including 500 salaried employees here in the United States by the end of this week. Thousands more on the way in the coming weeks. And the reason these two things are important is because Donald Trump was headed to Pennsylvania to kind of shore up a little bit of his working class support, right? I mean, Pennsylvania, Michigan, Wisconsin, places like that, that helped Donald Trump win in 2016 he may not have won all those states, but his talking points delivered to those states did help shore up some of his midwest working class support. And Ford was one of the things Donald Trump kept talking about during the campaign and in the early days of his presidency, and actually fairly recently as well, he swore to this country that he and he alone was the reason Ford was not cutting tons of American jobs, except they do.

They keep cutting lots of American jobs. Actually. Why? Because they want to pocket more money. Bernie Sanders actually summed it up nicely in the following tweet. He said, “Ford got nearly 750 million in tax breaks from the Trump tax scam and paid at CEO $18 million last year. Now Ford is laying off thousands of workers. The bottom line, Republican’s sold the tax scam as a way to create jobs and help workers. They lied.”

Furthermore, it’s been revealed that Ford, because they revealed this, uh, they’re going to say about $600 million by cutting all these workers. And these are good salaried white collar American jobs and 500 of them are going to be gone by the end of this week. The rest in the coming weeks to save $600 million on top of your $750 million tax break that she got. So we’re looking at well over a billion dollars, more than half of which was put into their pockets by the government in the form of that tax scam.

And this was all handed to us by Republicans. Donald Trump can campaign all he wants. He can tell every rally goer in this country that he is saving American jobs, but nothing could be further from the truth. This man has done absolutely nothing, not a single thing to protect American jobs. In fact, his policies are costing us jobs here in the United States. His trade war with China specifically is driving jobs out of this country. And the reason that’s happening is because for decades, Republicans and some Democrats alike have enabled corporations to do this. Things like NAFTA by Bill Clinton, CAFTA by George W. Bush, those encouraged American companies to ship our jobs to other countries. You know the big, the big tax breaks, the offshore tax havens, the tax cuts will put more money in your pocket. Just create some jobs. Okay, we’ll do that. Oh, nevermind. We’re going to cut jobs anyway. Corporations are never held accountable. In fact, they are rewarded when they get rid of American jobs. And Trump’s going to be out there in the coming months telling these workers that he saved their jobs. And it’s not true. Like almost everything else that comes out of that man’s mouth. It is an absolute lie. All of these jobs he’s told us that he saved the ones he prevented from going to Mexico or China. They still left. They just waited until the president did his victory lap to make those quiet announcements.