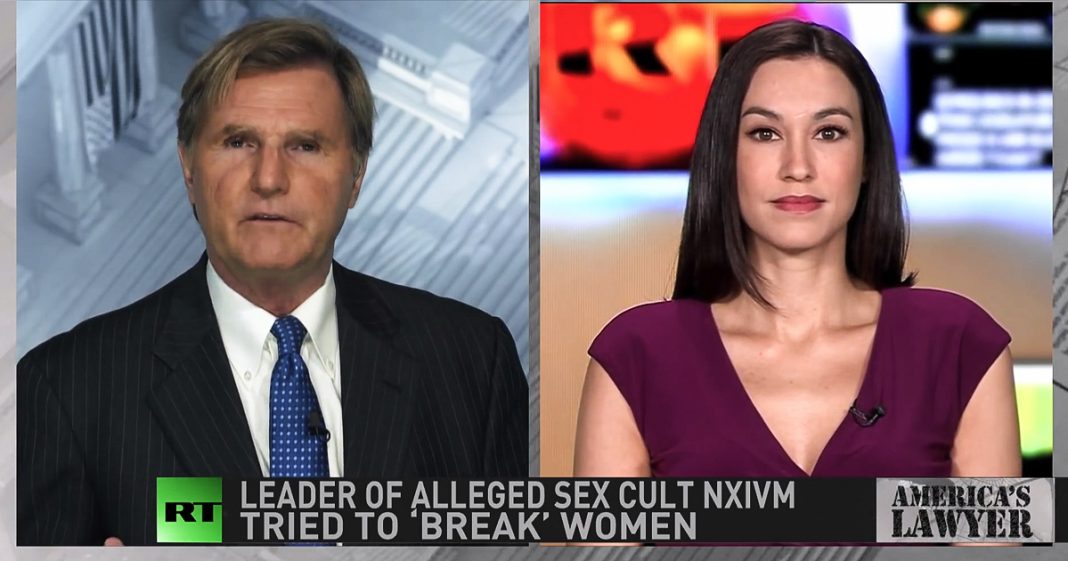 Via America’s Lawyer: Mike Papantonio is joined by RT Correspondent Brigida Santos to discuss how an alleged cult leader is accused of running a sex-cult pyramid scheme that enslaved women.

Mike Papantonio:             A self help guru, groomed women for sex, subjecting them to shame and humiliation and threatening to expose their deepest secrets if they didn’t comply with his wishes. RT correspondent, Brigida Santos, has the full story. Brigida, what a, these, it’s almost like you can’t push the limits in weird in stories anymore. What are the prosecutors alleging in this case against Keith Raniere?

Brigida Santos:                   The prosecutors are accusing Keith Raniere of creating an organization known as an NXIVM that was advertised as a professional self help, coaching and educational business, but actually operated more like an expensive pyramid scheme/master slave sex cult. During ongoing trial proceedings, the assistant US attorney has described the NXIVM leader as a predator who sexually exploited women often humiliating and blackmailing them with collateral which came in the form of naked photos or damaging secrets.

One of the females Raniere reportedly exploited and sexually engaged with was actually under age and last week a witness testified that Raniere also psychologically manipulated and broke his followers through near starvation diets, forced sex and isolation. Now, he reportedly labeled anyone who questioned him and his teachings, a suppressive person and encouraged his followers to distance themselves from these so called bad influences. But is this something straight out of the cults playbook.

Mike Papantonio:             So Brigida, you know, it sounds like we hear these stories again and again. It honestly does it, you know, the stories about whether it’s the Scientology church, whether it’s the Mormon church, whether it’s the Catholic church, if you look at all the similarities, you kind of have that cult factor that people are saying more and more. You’re hearing that. Well, there is a, it’s a cult environment and there’s always codefendants in those cases. You know, there’s other people that are part of it. Are there codefendants in this case with, with Raniere?

Brigida Santos:                   Now he currently stands trial alone, but five other NXIVM members were formally charged with a laundry list of crimes last year, including extortion, forced labor, sex trafficking, money laundering and obstruction of justice among a few of other ones. Those who have since pleaded guilty includes Smallville actress, Allison Mack, Seagram’s heiress Clare Bronfman and NXIVM’s former accountant. Several of these women are now expected to testify against Raniere during the ongoing trial.

Mike Papantonio:             Brigida, you’ve handled similar stories that in that we’ve done in the past. What is the draw here? How does somebody just abandon all sense of common sense? I mean, how is it that, it’s almost a suspension of disbelief. How are they brought in? It’s almost like, it’s almost like that mentality that I see is like the human trafficking cases that I’m handling right now.

Brigida Santos:                   Yeah. So a lot of these people are already searching for answers. You know, they’re going to him looking for self help. They want to pay fees to take classes that they think that they’re going to gain something out of that’s going to make their life better. And then you have these famous people like Allison Mack that actress from a CW show, I believe it was called Smallville.

You know, she’s famous. She’s drawing in young other women who look up to her and she’s now part of the scheme. And so they just bring in more and more people who are looking for answers and are susceptible to falling prey to this kind of a figure. This leader.

Mike Papantonio:             Yeah. Yeah. You know what I see sometimes too is sometimes the prosecutors look at this and they say, ah, these, these are accomplished people. They have, don’t have any reason to, to be, to be in weird world is the only way you can describe this or to, to drive, to drive this program that seems to be nothing less than human trafficking really when you drill down on it. And so prosecutors and law enforcement don’t pay as much attention to it and it gets it, they get away with for a lot longer. Listen, thanks for joining me. I’m dying to see how this goes in a court room.