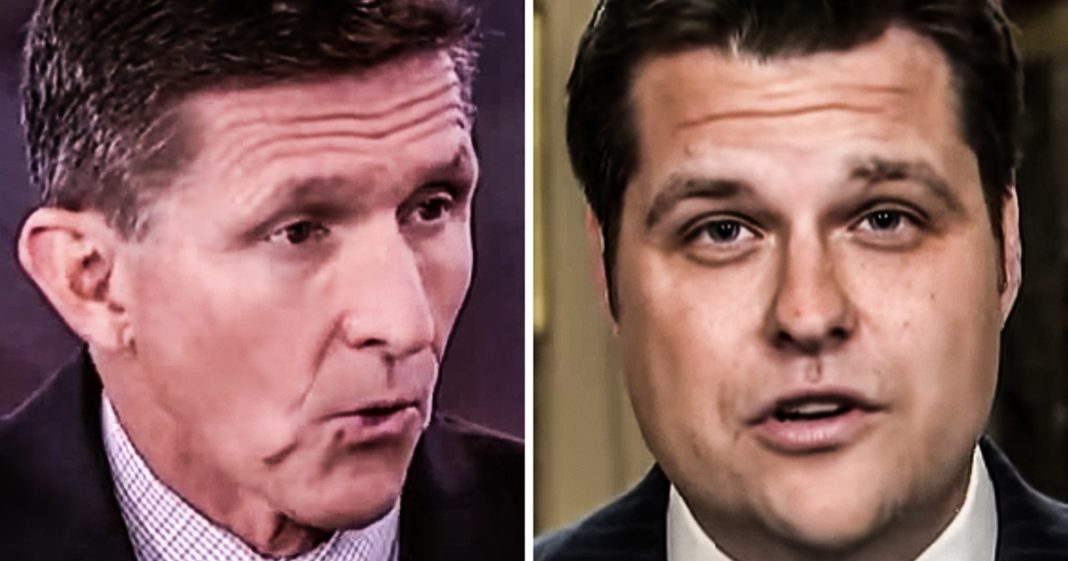 Michael Flynn was sending messages to Republican Representative Matt Gaetz, new reports show. The messages coincided with Flynn’s cooperation in the Mueller Probe and Gaetz’s attacks on the probe. Flynn also sent Gaetz Gifs of a bald eagle and an American flag within an hour of William Barr being confirmed as the new Attorney General. Ring of Fire’s Farron Cousins explains the significance, and more importantly the INSIGNIFICANCE, of this story.

A juicy story came out over this past weekend saying that Michael Flynn was actually messaging Republican Congressman Matt Gaetz on Twitter. At the same time he was supposed to be cooperating with the special prosecutor’s investigation. And he also sent him a direct message earlier this year on the same day. In fact, it is less than one hour after William Barr was confirmed as the new attorney general. Here’s what happened. Flynn sent his first message to Republican Matt Gaetz after Matt Gaetz appeared on Lou Dobbs on Fox News attacking the Mueller investigation. And here’s what Flynn sent. He said, you stay on top of what you’re doing. You’re leadership is so vital for our country. Now keep the pressure on. And then when bar was confirmed earlier this year, Flynn’s sent him two gifts, one of a bald eagle in one of an American flag. This story was reported, uh, got a story here from talking points. Memo one from CNN, one from political.

It was all over the news. Everybody Thought, oh my God, this is a big deal, right? Well, I hate to break it to you, but the only reason I’m talking about this story today is because it’s completely a non story. Now, don’t get me wrong, I love a Matt Gaetz as a horrible person story, as much as the next person, but this ain’t it. There’s absolutely no evidence that even suggests that Matt Gaetz and Michael Flynn had any kind of relationship prior to these messages. In fact, Matt Gaetz never even responded to these messages at all. So why put it, why even put Matt Gaetz Name in the headline? That’s what I don’t get. And this is what pisses me off about the media today. There are some really good, great, important, wonderful stories happening in the world right now that everybody needs to be aware of. And by wonderful, I mean horrible, but really media outlets spent this weekend wasting time talking about this nonsense.

And yes, I guess you could argue that I’m wasting time talking about this nonsense, but I’m calling out the media on this story. This doesn’t change anything with Flynn’s pleadings. It doesn’t implicate Matt Gaetz in any kind of criminal activity. It doesn’t say anything about Donald Trump whatsoever. It’s filler and filler is completely useless for a media that consumes news like candy. This story annoyed the hell out of me because I read, I read the talking points memo one in the CNN one end, the political one, and not one of them offered any kind of decent insight as to why we should even care that they are reporting this. Yeah, Flynn DMed a guy. Fantastic. It wasn’t vulgar. It wasn’t obscene. Uh, Flynn was the guy cooperating. So it’s not like Gaetz was trying to obstruct justice there. So what’s the point? And here’s, here’s the bottom line.

We know Trump has done some horrible things. We Know Matt Gaetz has done horrible things. We know Michael Flynn has done horrible things, but why not focus on those every time the men sneeze, it’s not worthy of a new headline. Okay. The public depends on the news to report the actual news, not these fluff filler pieces that get them all excited by a headline only to find out there’s absolutely no substance to the story whatsoever. And this story of Flynn DMing Matt Gaetz is absolutely one of those filler. Don’t waste your time on it. Stories that the media should have known better than to pump out all through the weekend.