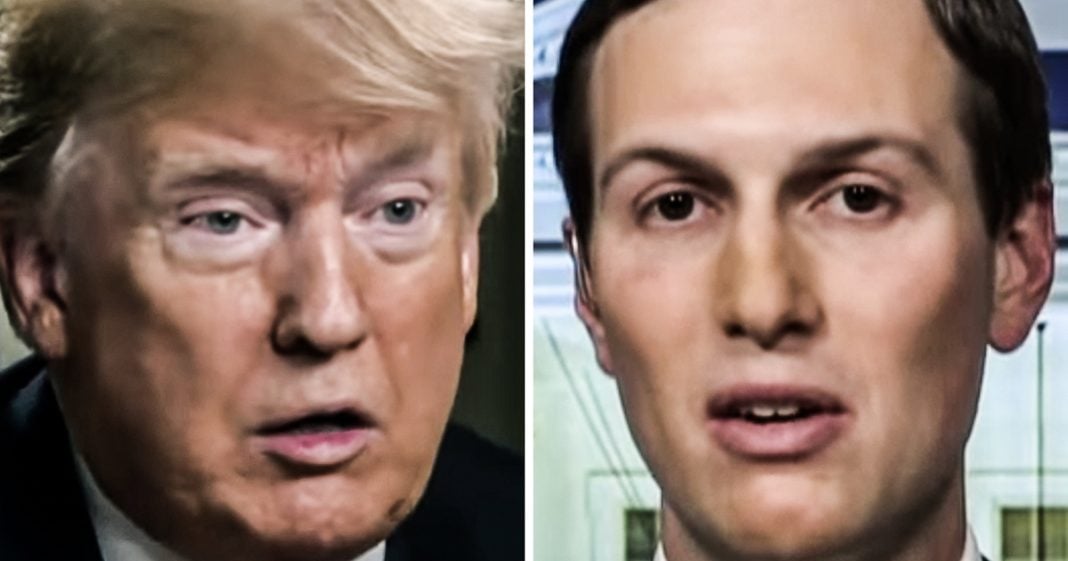 According to an explosive new report by The New York Times, multiple employees at Deutsche Bank believed that illegal activity was happening with the bank accounts of both Donald Trump and Jared Kushner, but they claim that the bank ignored their warnings. The accounts both set off alarms within the system designed to identify money laundering and other suspicious activities, but given that Trump was a major Party’s presidential nominee at the time, the bank refused to take action. Ring of Fire’s Farron Cousins discusses this.

On Sunday, the New York Times reported on a bombshell new story that says that five former and current employees at Deutsche Bank had flagged transactions in both Donald Trump’s accounts and the accounts of Jared Kushner’s as potentially illegal. Here’s what this story means. First and foremost, let’s get the details out of the way. You have these five people who worked at Deutsche Bank at the time. They have a computer system set up that is meant to basically monitor any kind of money laundering, any suspicious transactions. When that happens, those suspicious transactions flagged by the computers are sent to mid level employees who then go through manually and see if this warrants some kind of report to the Treasury Department. And in the cases of both Jared Cushner and Donald Trump, these employees did feel that these transactions were illegal. They saw large amounts of money just going back and forth between these accounts, including some accounts for the now defunct Trump foundation.

So they write up their report, they gave it to the senior managers who were supposed to approve it and send it on to the Treasury Department for a full investigation. Except that second part never happened. They turned it over to the higher management folks, but those people didn’t ever bother turning it over for investigation. These suspicious transactions took place in both 2016 and 2017. So this was at the height, the height of Donald Trump’s presidential campaign. It was while he and Jared Cushner, we’re living in the White House. They did confirm that some of the money going back and forth between the accounts was between Jared Kushner and some Russians and they just figured what the hell, let’s just let sleeping dogs lie. This is actually a pretty common for Deutsche Bank. Deutsche Bank several years ago got popped for about $40 billion laundering money for Russian officials and wealthy Russians. They also got popped for moving money in and out of Iran in violation of the sanctions that the US had place on that country.

So we know they’re, they’re perfectly fine laundering money. We know they’re perfectly fine breaking the law by sending money to and from Iran. Oh. And also, uh, they got popped for tens of millions of dollars in fines for not having the proper protocols in place to identify money laundering activities. This was a bank that is being closely watched by the federal government, by the Treasury Department because they know that this is the preferred bank of money launderers and it also happens to be the preferred Bank of Donald Trump, one of the only banks willing to actually lend him money, two and a half billion dollars when every other bank in this country said, no, you’re too much of a liability. You’re too much of a risk. We know you’re not going to pay us back, but for some reason Deutsche Bank said, sure, we’ll go with it. And then Lo and behold, all of these suspicious transactions that the higher ups decided now we don’t need to tell anybody about these.

Let’s just keep it between ourselves. This is bad news for the president. This is 100% bad news for the president and for his son in law. Jared Cushner. Why? Well, because one, we know that Deutsche Bank has been working with Congress and this administration has now sued them to stop them from working with Congress. But Deutsche Bank has said, well, we still want to work with them when this lawsuit is finished. We’re gonna keep working with them. The, we know they’re working with, uh, the New York attorney general, and we also happen to know the names of one of the people involved in this. A woman by the name of Tammy Mcfadden, who was let go from Deutsche Bank last year after she raised concerns to higher ups about the fact that, hey, it seems like we’re laundering a lot of money for people. I’m sure Ms. McFadden would be more than happy to go testify in front of Congress about what she knows, because not only did she get fired for raising concerns about money laundering, she’s also one of the people who saw specifically these suspicious transactions in the Trump and Cushner accounts. So Congress get busy. You know what to do. You’ve got her name, she seems willing to talk. Invite her over for a conversation. Let’s get this on the congressional record and let’s figure out what the hell kind of activity was happening in Donald Trump and Jared Kushner’s bank accounts.