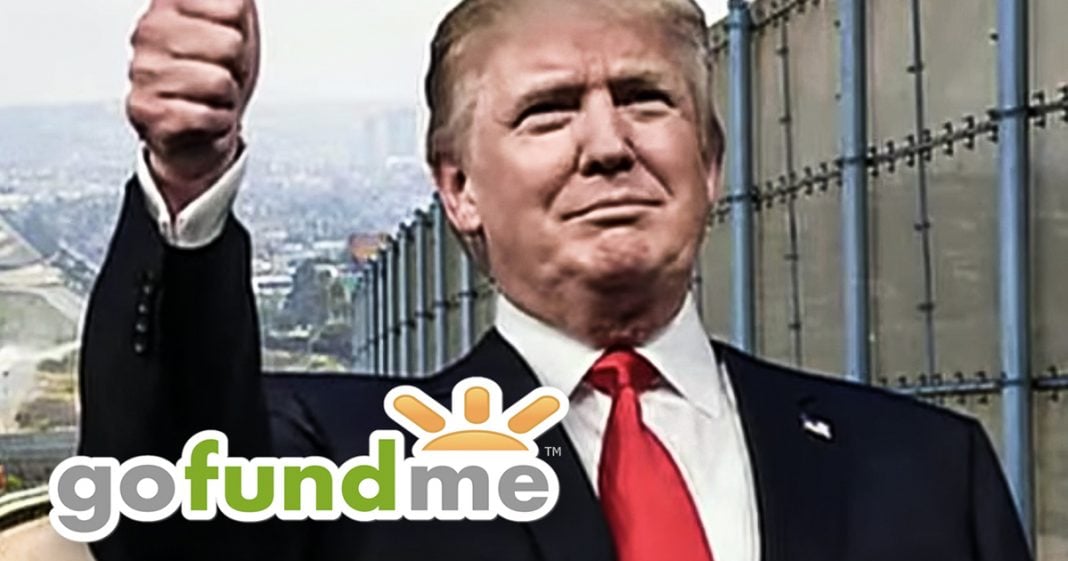 Brian Kolfage, the man who raised more than $20 million via GoFundMe to start building Donald Trump’s border wall has pulled a major con on some of the most vulnerable Trump supporters. He took the money and virtually vanished, even after promising to “spend every penny” on wall construction. This isn’t the first hoax that this man has perpetrated, and as long as Trump supporters remain easy marks, it probably won’t be the last. Ring of Fire’s Farron Cousins discusses this.

Yeah, there’s the old saying that goes a fool and his money are soon parted. And when it comes to Donald Trump supporters, there is a hell of a lot of fools out there with a hell of a lot of money that they have now been parted from. And they have been parted from that money by a man named Brian Kolfage, who you may remember is the a war veteran who set up the GoFundMe many, many months ago to raise $1 billion to build the dam border wall himself, tired of congressional inaction. Give me your money and I’m going to go down there and I’m gonna Start Building that wall for you. Except that, uh, he raised 20, 2120 3 million and he hasn’t built a wall and see the Trump supporters who gave to this GoFundMe thinking that Mr. Cole phase was going to go down there with a hammer and nails himself and start building.

They’re actually starting to get pissed off because they realize now that they’ve been conned, not unlike how they got conned into voting for Donald Trump himself. You see Brian Cole phage basically saw the big con that Trump pulled off and a light bulb moment occurred for him and he said, you know what? I bet I could do the same thing and I can make a pretty penny off of it too. So what’s happened in the few months since Mr. Cole phase raise that 20 plus million dollars from these gullible Trump’s supporters? The answer is we don’t know, and that’s the worst part for these Trump supporters who gave him money. They don’t know where the money is. They don’t know. Right now we’re cold phases. They don’t know what he’s doing. They don’t know where that money is sitting. They don’t know where it’s going to go because every time they ask him, he says, sh folks, it’s a big old secret.

I can’t tell you if I tell you the ACLU’s coming after me, but trust me, I’m making this happen. Don’t you worry about it. In fact, I’m going to go ahead and read you exactly the latest update here from Mr Goldfish on his Facebook page wall update. There’s no update because we’re remaining silent for a very good reason. You will have the best present very soon. We are in the homestretch and it’s on a need to know basis. Don’t believe the lying left wing media, Steve Bannon, Kurt Schilling, Sheriff David Clarke, and others would not be backing me on this if they thought it wasn’t happening. Well, there you go. I guess I, you know, hey, it’s happening because all of these other grifters have also joined forces with him. Come on folks. You got conned. And I’m not even gonna say that you didn’t deserve it because you’re really did this big.

It actually, I don’t even know if coal face himself as a bigot, but he realized he could make a pretty penny off of a bunch of ignorant bigots and he did a cons. You good? And he’s playing the long now because in January, in March and in April and now in May, he has repeatedly told you that, oh, it’s about to be done, but I can’t tell you about it and it, oh, it’s about to be done. I can’t tell you. Oh, it’s about to be done. But I can’t tell Ya. I’m almost there, but I can’t. Ah, he’s not building any border wall folks. He took your money. He made tens of millions of dollars and you’re not getting it back. Just like with your vote for Donald Trump, you got 100% conned by this man who is actually been already known to pull off cons like this in the past. This is the same guy who raised a ton of money that was supposed to go to veteran’s hospitals, but then he never sent it to the veteran’s hospitals. Now make no mistake, coal phase does belong in jail, right? You can’t just call on people like this coal face should be arrested. And that’s the next step I want these Trump supporters to take. They’re pissed off. Now they understand they got conned. So do what comes next in the process and go ahead and press charges against Mr Brian Kolfage.