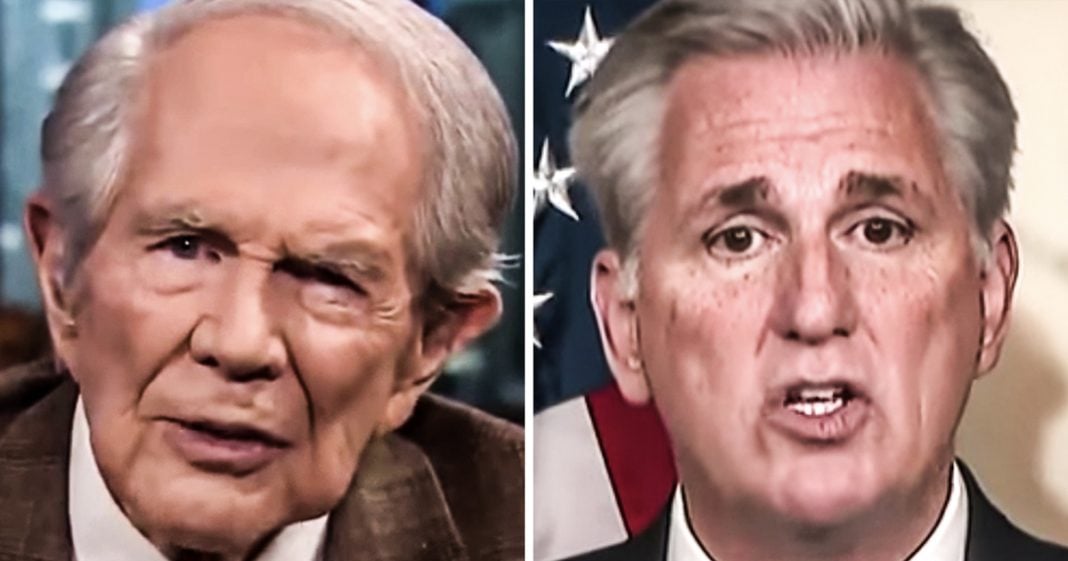 Republicans from Pat Robertson to House Minority Leader Kevin McCarthy are terrified that the string of strict anti-abortion laws that Republicans are passing are going to cost them dearly in 2020. They deserve it. The Republican Party has no idea how far they are setting back reproductive rights for women in this country, and given the backlash that we’ve already seen, it seems likely that Republicans are going to pay dearly in the near future. Ring of Fire’s Farron Cousins discusses this.

While Republicans aren’t taking much time to celebrate their horrible victories this week, taking away the rights of women all across this country, Georgia, Alabama, and now we’ve got one coming in Missouri, Ohio. All of these states are working on some of the most restrictive abortion bills this country’s ever seen. Alabama really took the cake though. Uh, by passing this law that includes no exceptions for incest and rape. Basically you’re a woman. You get pregnant in the state of Alabama, you’re 100% going to have to have that baby. If a doctor gives you an abortion, he or she is going to get a prison sentence longer than any rapist ever would uh, same thing in Georgia.

And they had a little victory party when they did this. Yay. We’re taking away the rights of women. And mostly it was men who made these decisions because they don’t understand women and they don’t understand science. But also according to conservatives, they don’t understand the American electorate either because people who understand what they’re talking about, at least in terms of electoral politics are predicting that these restrictive bills are not only going to get shot down in court the second they get there, but they’re also going to hand 2020 over to the Democrats without any problem what so ever and these are just fly by night or Republicans. It’s not just your typical, Whoa, I’m some kind of republican strategists and I appear on CNN every other day. I’m talking about House Minority Leader Kevin McCarthy talking about right wing talk or Eric Erickson and I am talking about the leader of the right wing crazies, Pat Robertson, all of whom have said this is an absolute and utter disaster for the Republican Party because they know exactly what’s going to happen by not including any of these exceptions by including these absolutely absurd penalties and basically by flying in the face of Roe v Wade these laws or get struck down in court, they’ll get struck down, they’ll get appealed where they get struck down again and then most likely they are predicting the Supreme Court won’t even take them up because there’s going to be no reason for the Supreme Court to take them up.

They won’t be able to point to any specific thing that happened in the lower court decisions that would merit the Supreme Court to go back and take a third, fourth, fifth look at it. So even though they got Kavanaugh and Gorsuch up there, they still don’t even think they’re going to have a victory at the supreme court. That people who will have a victory they’re claiming are the Democrats because as they say, the Democrats will be using these restrictive laws to fundraise for the next 10 years. On top of that, pretty much everyone in this country that’s not from Georgia or Alabama is pissed off right now. This, and rightfully so, they’re energized, they’re angry, and they’re gonna show up in droves in 2020 to send the Republican’s packing. This doesn’t end well for Republicans, and it sure as hell doesn’t in the way that they think it will.

Because when you sit there, you white men and you attempt to take away the rights of women because you don’t understand science. You don’t understand anything outside of being a privilege white dude. There’s always a backlash. There’s always a comeuppance, and I promise yours is right around the corner, whether it’s through the courts or through our electoral processes. You are not going to escape this unscathed. You’re not. That’s not how it works. So you may be celebrating your tiny little victories right now, but I assure you those will be short lived and these laws will not remain on the books. And in the future, maybe, maybe you’ll get the message that you need to think twice before taking away the rights of women in this country because God forbid something ever happened and people start to take away your rights, right? I mean, how much would men in this country be panicking if suddenly Viagara was outlawed or if a sec dummies were outlawed? Or if we harsh in the punishments for rape, even for first time offenders like that school bus driver in New York that got off because he raped a 14 year old, but it was this first rape. So he got no prison sentence, right?

Men, Republican men have made their careers off of trying to control women’s bodies while at the same time ignoring the fact that their own logic that they use to control women’s bodies could easily be turned around and used to control their bodies. If they say that birth is a natural thing, well, so is in fertility. While we let men get treatment for that, so his impotence but Viagra’s covered by most insurance plans, so if you want to argue that were interfering with the natural way, then there goes all your fun sex times because we’re taking away all your rights to. That’s not gonna happen because it’s not going to need to happen. It should happen. To be honest. These people should be punished in the same way they’re trying to punish women, but nonetheless, I have a little bit of faith in our court system.

Not a lot, but I do have a little, and I think in this particular instance they’re going to do the right thing. Even if it’s a hardcore, horrible right wing judge. They understand the extremes of these laws and they know that there is no way anything like this could be considered. Constitutional. Flip side of that obviously is that this doesn’t mean we just sit back and let the courts handle it. No, stay pissed. Stay angry, stay active, stay energized, and stay that way even after these rulings come down. Because if you don’t, if you get complicit, if you think, okay, we won, this is over. No, they’re going to try again. So it’s up to us to stay angry and get them out of office in 2020.