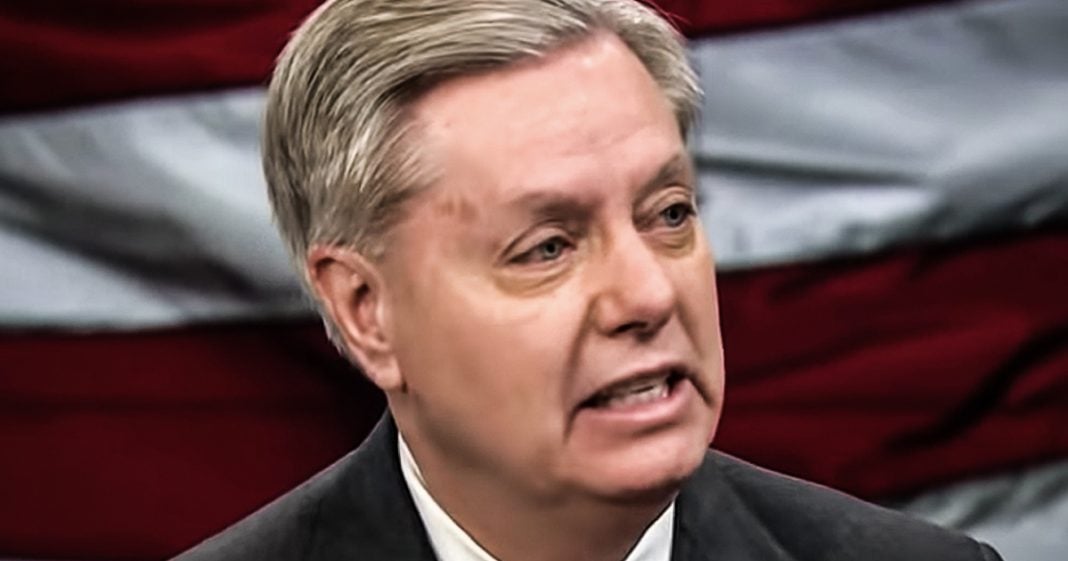 For many months now, great writers have put out think pieces telling us that Lindsey Graham has sold his soul or that he’s somehow compromised into supporting Donald Trump. What if Lindsey was always a horrible person? Because he always has been. Just because he had a moment in his life where he didn’t like Trump doesn’t forgive all of his other sins from before Trump was even a thing. Graham has always been an awful person, and nothing has actually changed with him. Ring of Fire’s Farron Cousins explains.

Earlier this week on Twitter, the Hashtag Lindsey Graham resign was trending because people were so mad that this man would tell Donald Trump Jr. to ignore a subpoena from Congress. He sent softened his language and he said, no, I think he’s not above the law and neither is Biden and so sure and Trump Jr. agreed to testify and you know he’s going to honor the subpoena so good for them. Later in the week after that, there was a headline on CNN that Red Lindsey Graham has sold his soul to Trump echoing a statement that we have heard for at least the last six months. What has happened to Lindsay Graham folks and you know what? I am so tired of hearing that question asked because it’s like people know nothing about the man’s history. Lindsey Graham didn’t suddenly become horrible because he started supporting Donald Trump. Lindsey Graham has been horrible for his entire career. I mean that’s pretty much what his career’s based on is just being a shitty human being.

Then when he saw that it wouldn’t, he decided to praise Trump and guess what? It has worked out beautifully for him among Republicans, but for those who think that Lynn Lindsey Graham suddenly became a bad person or suddenly sold his soul. Let’s go through a little bit of Lindsey Graham’s history right here. During the, uh, Samuel Alito confirmation hearings back in 2006, there was actually an issue where it was revealed that Alito was likely a member of a group in college that was noted for being incredibly sexist and incredibly bigoted, and they wanted an investigation. Guess who stopped that? That was Lindsey Graham who said, I don’t care if he’s a sexist and a bigot, put them on the Supreme Court. Then you have a April 3rd, 2011 where he actually called for the curtailing of some free speech rights. Hm. Oh, uh, then you have on May 23rd, 2005, where Lindsey Graham actually with the gang of 14 voted to basically kind of kill the filibuster, the nuclear option, all that stuff so that we could ran through a bunch of conservative judicial appointments.

That was 2005 folks. Uh, here’s another 2005. A Graham was pro-torture. Obviously than a few years later, 2011, Graham made the following statement. When they say, I want my lawyer, you tell them, shut up. You don’t get a lawyer, you’re an enemy combatant and we are going to talk to you about why you joined Al Qaeda. So not only is he pro torture, which he’s been for his whole career, same thing with pro bombing the hell out of any country he wants to, but he’s also against the thought of providing these uh, enemy combatants that we had locked down there in Guantanamo Bay. Most of them never charged. He doesn’t think they should have legal representation, which means he doesn’t believe in the US constitution. He’s always been anti-immigrant. He’s always been a pro guns, no extended background checks, nothing on that. Um, he has not been pro-health care, obviously, always been a staunch pro-life conservative. Um, it’s absolutely unbelievable to take a few minutes and just go back through Lindsey Graham’s history and see what a horrible human being this man has always been. This is who Lindsey Graham is. What we’re seeing right now is not some new version of Lindsey Graham. Lindsey Graham has always been and will always be an absolutely horrible human being, so let’s stop pretending that he was ever a decent Republican.