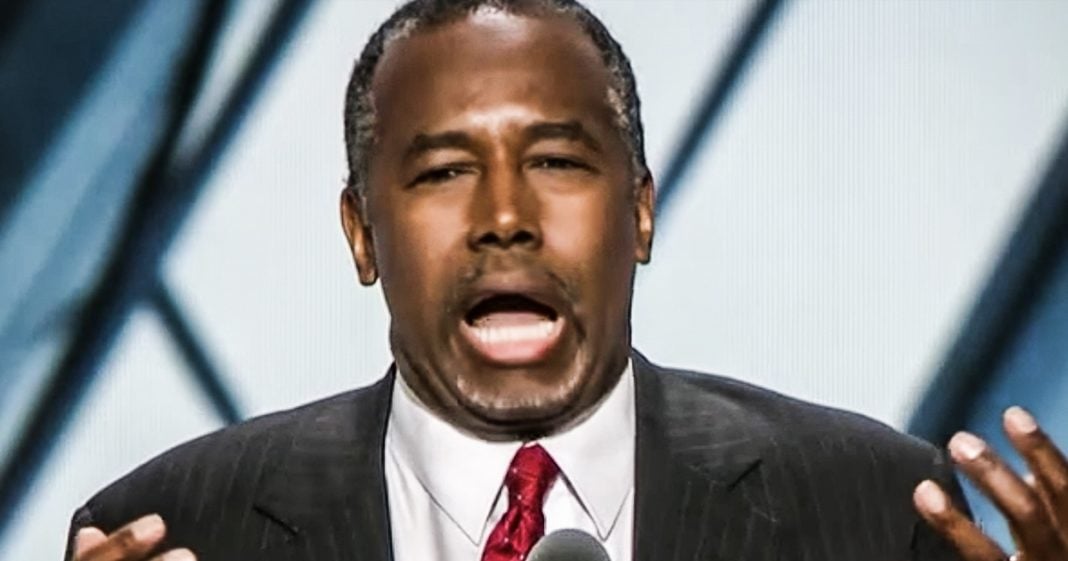 Housing and Urban Development Secretary Ben Carson broke the law with his ridiculous furniture spending, the Government Accountability Office says. This is an inquiry that has been going on for well over a year, and they’ve finally decided to make it known that Carson disobeyed the law with his massive order. Of course, Carson attempted to blame the whole mess on his wife during his testimony about it, showing that the man has zero class to speak of. Ring of Fire’s Farron Cousins discusses this.

On Thursday of this past week, the government accountability office filed a report saying that Ben Carson, the Secretary of Housing and urban development, 100% broke the law. Any broke the law by spending or attempting to spend 31 plus thousand dollars on a dining set for his office and $8,000 on a dishwasher for his office kitchen. Now I got to say this, okay, I, uh, my home’s a bit of a fixer upper right. I’m at Lowe’s, Home Depot, wherever it is, ace hardware a couple of times a month. I have never in my life seen an $8,000 dishwasher. So Kudos to Ben Carson for a finding one that absolutely is way overpriced and charging the federal government for it and breaking the law by doing so. I couldn’t spend $8,000 on a dishwasher if I tried mostly cause I don’t have $8,000 on me. But nonetheless, getting off topic here, Ben Carson broke the law.

The law states that all of these people, you know, HUD education, any of them, if you want to spend more than $5,000 on crap for your office, Congress has to approve it first. That is the law. It’s not just a tradition that’s law. And we know last year the stories came out, Ben Carson spending almost $32,000 on a dining set, you know, $1,000 on a dishwasher, thousands more on other pieces of crap for his office. Then he got called in to Congress to testify about this and do you remember what happened there? Dude blamed his wife, threw his wife under the bus on the record in congressional testimony and said, I didn’t even want it. This was her to, she tried to make me buy all this stuff.

What a no class piece of crap Ben Carson is. You knew this was wrong or you should have, I don’t think you did know it was wrong because you have no idea what the hell you’re doing at any point in your life today. But even then fucking own it to sit there and throw your wife under the bus saying that out loud. So it’s now a part of the congressional record. A hundred years from now, people can go back and read that transcript and see Ben Carson, Hud Secretary in 2018 throwing his own wife under the bus because he didn’t want to get in trouble. No, I hope Mrs. Carson understands this as well. This is what you’re married to. This is what you chose. Is this what you want? Is this a happy life for you? I can’t imagine that it is, but what’s even worse about this story is, again, GAO, government accountability office came out this week and said, Ben Carson broke the law.

Nothing’s gonna happen. Nothing’s going to happen. What they’ve said is, okay, well, we want, you know, a better system of oversight in place. You know, put the protocols back and get congressional approval and we’re going to call it a day. Well here is what Democratic Senator Jack Reed, a top Democrat on the Senate Appropriations subcommittee who’s actually in charge of Hud. This is what he said about the whole thing. He said, I am disturbed by the pattern of false statements and attempts to conceal this incident, mislead the public and prevent Congress and the American people from seeing how taxpayer dollars are being mismanaged. So read here is pissed off and rightfully so. The GAO says he broke the law.

Why has Ben Carson not resigning immediately? Why has been Carson not being removed from office? That’s what makes no sense about this. To me, I am sick and tired of seeing these reports, whether it’s been Carson, Betsy Devos, Steven Mnuchin, you know, whoever it is, a lot of them have already left your, your Pruitt’s and uh, other folks like that. Alex Azar and another great example. Why is it that these people can continuously do things that skirt the law, that break the law, that violate procedure, that violate their own offices, and never wants to be held accountable for any single piece of it? That’s what pisses me off more than anything about this entire administration. They act like they’re above the law because they never get punished when they actually violate.