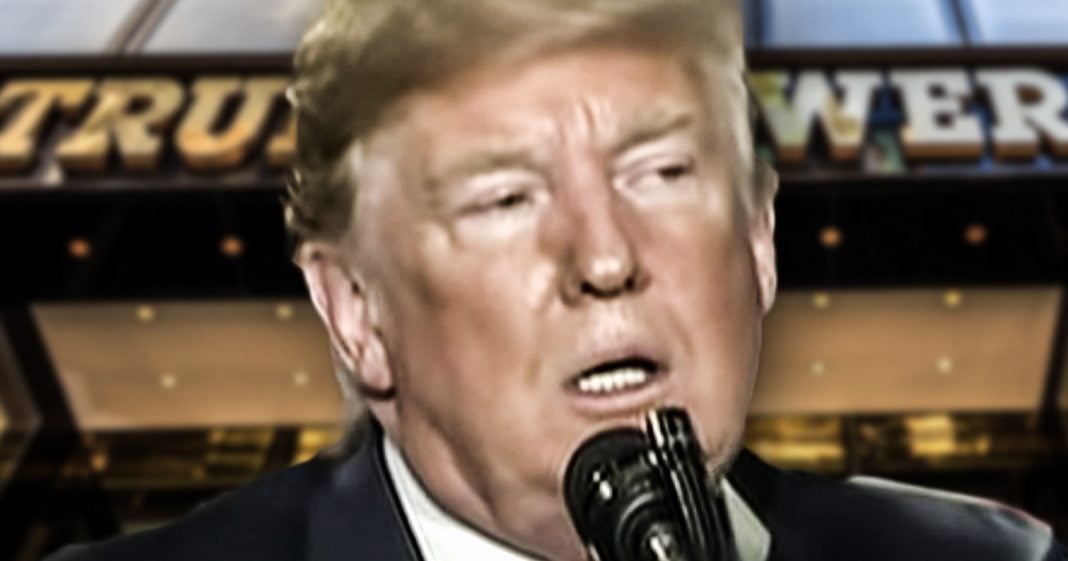 Donald Trump really didn’t think this whole presidency thing through. He’s managed to rile up his hate-filled base with his attacks on immigrants and other groups, but those people don’t have the money to prop up his businesses. The people who have benefited from his policies, even if they support him, don’t want to be associated with his toxic brand, and because of this his businesses are starting to lose a LOT of money. Ring of Fire’s Farron Cousins explains what’s happening.

You know, there’d been a lot of talk. Basically since Donald Trump took office about how much money this idiot is making off of just being the president of the United States. You know, people going to his businesses, all the money that we, the taxpayers have had to spend at places like Mara Lago and his other a Trump owned properties. And yes, we do. We’ve paid a lot. Millions upon millions of dollars have gone back into Trump’s pocket from the taxpayers just in expenses incurred at his own properties. But here’s one thing that hasn’t gotten a lot of focus. The amount of money that Donald Trump is losing by being the president of the United States. Well, you know what, let me rephrase that because it’s not just being the president of the United States that’s losing him money. It’s being Donald Trump that’s losing him money, finally showcasing for the entire planet to see what a horrible human being he truly is, has had an incredibly negative impact on the sales of condos in Trump tower, specifically Trump tower Manhattan.

In the last two years, in the last two years, nearly every single condo sold at Trump tower Manhattan has been sold for a loss. Most of those losses in the sales have been at least 20% sometimes more, and the reason, according to people who own the condos and are trying to sell them is because nobody wants to be associated with that big, stupid name on front of that building. T, R, U, M, P, Trump, the name, the association, the toxicity of Donald Trump is preventing people from wanting to buy inside Trump tower. In fact, the occupancy rate has fallen from 99% to 83% in the last seven years, which is well below the average in Manhattan. One of the least populated buildings in Manhattan now is Trump tower. And here’s why. Donald Trump was able to mount a successful campaign by appealing to the hard alt right, bigoted base of the Republican Party.

Those people love him more than anyone on this planet could ever love another human being. It’s sickening. But these are also people who don’t have the money to go buy a condo in Trump tower Moscow. They can’t afford a membership to Maro Lago. They can’t go to Bedminster and play golf. They can’t afford it. And I’m not saying that to be mean. That’s the way it is. So yeah, those hate filled bigots that are your base. They can’t prop up your businesses. Meanwhile, the rich people in this country who are benefiting from your policies, and even if they support you, they refuse to buy in your building because of the stigma that comes along with that. They’ll support you just fine in private. They’ll go to your little private fundraisers, but to actually be seen by the public showing support for you or your businesses, they don’t want anything to do with that.

So the present stuck between a rock and a hard place. Does he softened his language? Does it become a decent human being to start making money again? Or does he continue appeal to the bigots who can’t buy as properties and alienate more and more rich people? Well, the answer is neither, because you know what’s propping up Donald Trump’s businesses today. The fact that he is the president of the United States, the Trump 2020 campaign has a, spent almost a million dollars in Trump tower Manhattan pretty much in the last year or two. So they’re helping to prop that up. Everything selling for a loss. People don’t want to buy in there, but luckily Donald Trump knows how to manipulate the system. And so he’s making his campaign. The RNC itself is doing it with the one in a DC, the Trump hotel in DC, and those are what’s propping up his presidency. But the second he leaves office, all of that goes away. But the toxicity of his name stays forever.