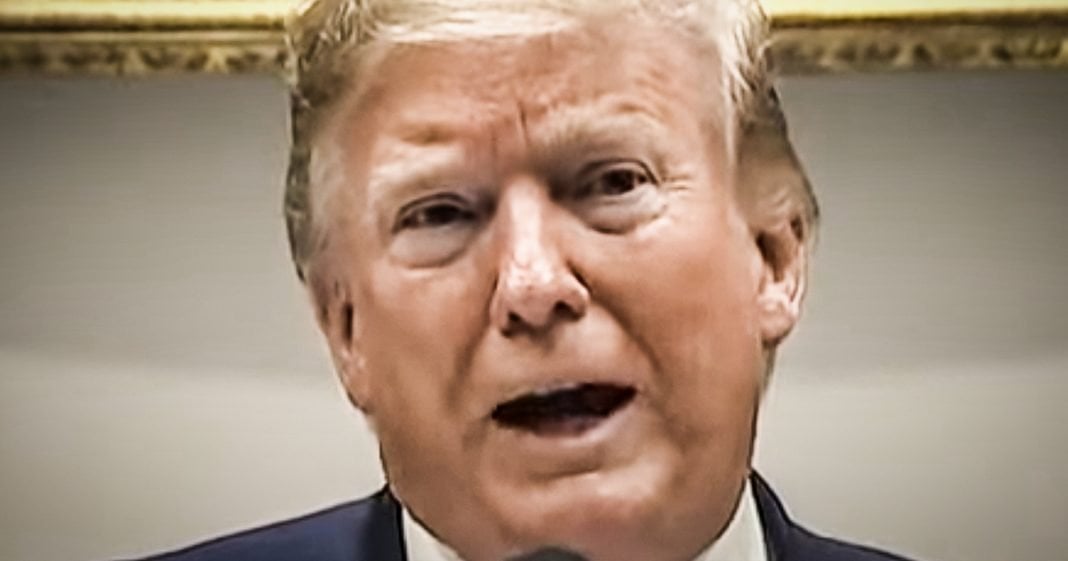 Donald Trump apparently loves showing Americans that he’s really not smart enough to be the President, and he did so this week by actually urging American citizens to NOT buy American goods if they were manufactured or use parts manufactured in China. He’s starting to panic now that we all know his tariffs are being paid by American consumers, and his panicked state is making him even dumber than usual. Ring of Fire’s Farron Cousins discusses this.

You know, with each passing day, Donald Trump tries to out and do himself to prove that he is in fact dumber than George W. Bush could have ever dreamt of being as somebody who covered the Bush administration. Um, we really didn’t think it could get dumber than that, right? This man would go up to a podium, make up his own words, say things that we all knew weren’t true, just nonsensical patterns of speech that led nowhere and yet then comes this very stable genius Donald Trump who has at every turn proven that he is even dumber than that guy. We had an office from, uh, starting with the 2000 election.

But what Trump did this week proves beyond a doubt that yeah, he really is one of the dumbest presidents we have ever had. Certainly the dumbest in my lifetime. Trump actually got on Twitter earlier this week and told American citizens to not buy American, do not buy American goods from American companies. If they do any of their manufacturing in China or if they get any parts from China that have been tariff to Helen back at this point, avoid them all together and then you, the American consumer no longer have to pay the tariffs and then it’s just China paying them for the a 1000000th time.

China’s not paying the terrace. Okay. Now they may have to pay some and that money goes to the treasury. US businesses bringing in those products also have to pay part of the tariffs. But both countries. Yeah. China and US businesses actually, they make up for it by increasing the cost to consumers so they get their money back so they don’t lose anything we the consumers do. And now that Trump understands that everybody else in the country already knew this and he’s just now learning it because he’s such a moron now. He’s like, Oh crap, what do I do? I know. Don’t buy goods in America.

Quite literally the dumbest response to the dumbest problem we’ve ever seen a US president create. Cause let’s also not forget the Trump 100% created this problem. We created it on his own because he doesn’t understand how trade works, how economics work or how the United States work or how capitalism in the United States works. This man, honest to God didn’t understand that.

And here he is calling the shots on it, screwing us all over. But really, I mean look, here’s the tweet, here’s the tweet. Um, completely avoided if you buy from a non tariff country or you buy the product inside the USA, the best idea that zero tariffs, many tariffed companies will be leaving China for Vietnam and other sets countries in Asia. That’s why China wants to make a deal so badly. Um, again though US companies, a lot of them are really dependent on goods that come from China and it’s not just China, it’s all these other countries he’s mentioned as well. You know, you take a look at your, your cell phone. Do you think it’s just American made goods and Chinese made goods in there? No. You’ve got goods from all over the planet that found their way into that little phone in your pocket.

You know, the uh, jacket that you’re wearing wasn’t just made in one place. All the different little pieces of it come from one place or another and they’re all put together somewhere else to be shipped somewhere else to sold somewhere else. This truly is a global economy. It’s not just China and just the United States and Trump doesn’t seem to understand that it would be damn near impossible for a US consumer to go out there and completely boycott any product that has any kind of Chinese part piece or fabric in it. First of all, we don’t even know. I mean, that would require extensive, extensive, uh, research to actually find things that have none of that in it. Research that I’m willing to bet zero Americans are willing to do. But Trump is desperate at this point because he knows the charade is up. He still lying to us obviously, that all China wants to deal.

China doesn’t want to deal. They did want a deal, but then they realized you lied to them. And so they backed out of that deal because you came to the table already prepared to lie your ass off. They weren’t going to deal with that. They can withstand it. We cannot, they as a country may not be as concerned about what’s happening to their citizens. We as a country always thought we did care, but apparently we don’t. Or at least Trump doesn’t. The guy calling the shots, people are going bankrupt. People are losing their businesses and every time American citizens get paid, we’re seeing more and more of that paycheck go towards the same goods that we were purchasing before. Yet they now all have higher prices. Oh, and back to the 1.2 about just by only American made goods is that reports have also shown that American made goods that actually don’t rely on any Chinese parts. Um, the prices on those have actually gone up as well because American companies don’t want their prices to be seen as inferior. So they’re actually just raising them to match the price of the tariff goods. We’re getting screwed every way you look at it. Even by those home grown American made companies, everybody is out to screw consumers and at this point, unfortunately it looks like nobody is out there looking out for us.