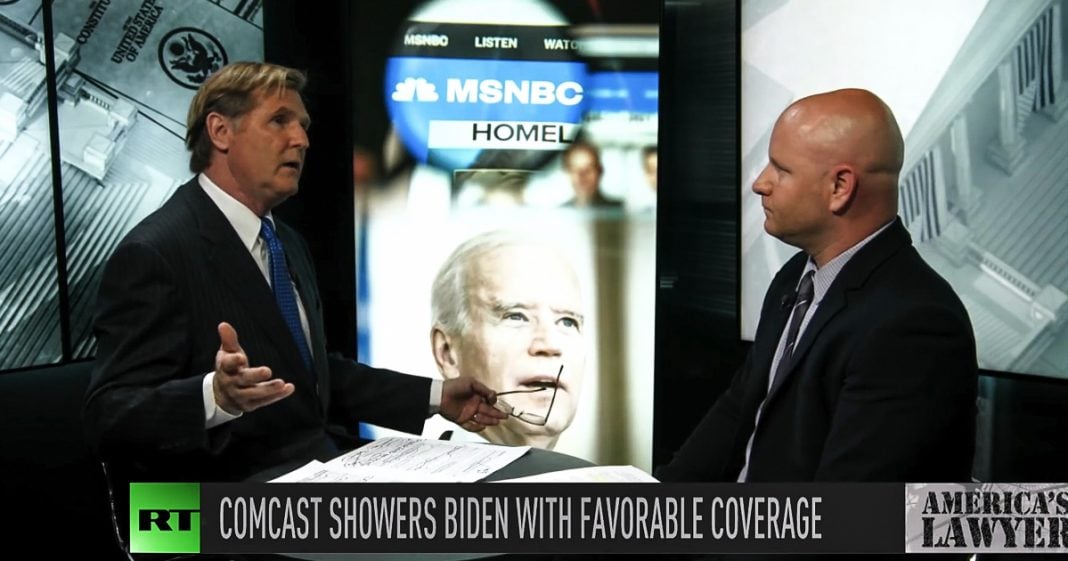 Via America’s Lawyer: Joe Biden kicked off his presidential campaign by attending a fundraiser at the home of the CEO of Comcast. Mike Papantonio and Farron Cousins discuss.

Mike Papantonio:             Joe Biden kicked off his presidential campaign by attending a fundraiser at the home of the CEO of Comcast. And this is part of the reason why MSNBC is in love with Joe Biden. My God. I mean you, you know, what is it? What is up with Morning Joe? Well, I mean it’s, it’s, it’s almost laughable. You know, look, this is a guy, let’s not forget. Let’s talk about the barnacles that this guy has.

Okay, he has barnacles obviously on Anita Hill, barnacles on his dealing with Iraq. He was all about, yeah, let’s invade, let’s invade. His, his past on integration has been terrible. His, they call him limousine Joe. That’s, that’s, that’s how he’s regarded now. His, his involvement with bankruptcy where he said he gave corporations a just carte blanc.

Yeah, we’re going to protect you in bankruptcy, a person can’t even declare bankruptcy and get their student loans taken care of now. This guy is nothing more than Hillary Clinton with an Adam’s apple in a beard. That’s how I see this. I think he’s DOA.

Farron Cousins:                  I would love to see that. But unfortunately, MSNBC by virtue of the fact that Joe Biden is good buddies with the CEO of Comcast, David Cohen.

Mike Papantonio:             This is the problem the Democrats have right now. This is simply Hillary Clinton. I mean, how, how do you overcome the Anita Hill issue? Does that just going to go away? And don’t you say, well, let’s look at the reality here. This is a Wall Street Democrat who has given corporations everything they want. Now the Comcast thing is really important.

Comcast owns MSNBC, as you point out, they have a huge fundraiser for Biden. They don’t, they don’t say a word about the fact that here you got a guy that, you know, we raised a lot of money for and oh by the way, we’re in the cheering section for him. Everybody from Rachel Maddow all the way to the bottom of Joe Scarborough. I mean it’s top to bottom. This is part of the, of the program. What’s your take?

Mike Papantonio:             He’s been on the wrong side of women’s rights, racial rights, surveillance, Iraq, antitrust, Comcast. I mean really. Comcast is, has to embrace Joe Biden because Joe Biden’s come out and said he does not want to heighten the scrutiny in antitrust cases. That’s what he’s saying. I don’t want to look at antitrust cases. These are my pals. These are the same people who gave all that money to Hillary Clinton.

Farron Cousins:                  No, and what’s going to happen, hopefully, obviously we’re still pretty young in this whole election cycle. We have yet to get to the debates. I think we’re 49 days away at this point. That could change things for Joe. You’ve got people that are going to be on that democratic stage that have real plans and ideas. They don’t want to sit there for an hour and say, I don’t like Trump. Vote for me. They’ve got real plans.

Mike Papantonio:             Uncle Joe, limousine Joe is going to have some problems in this campaign. Could pull it off, we’ll see. Farron, thanks for joining me. Okay. We’ll, this is a story we’re going to be a following for quite awhile.