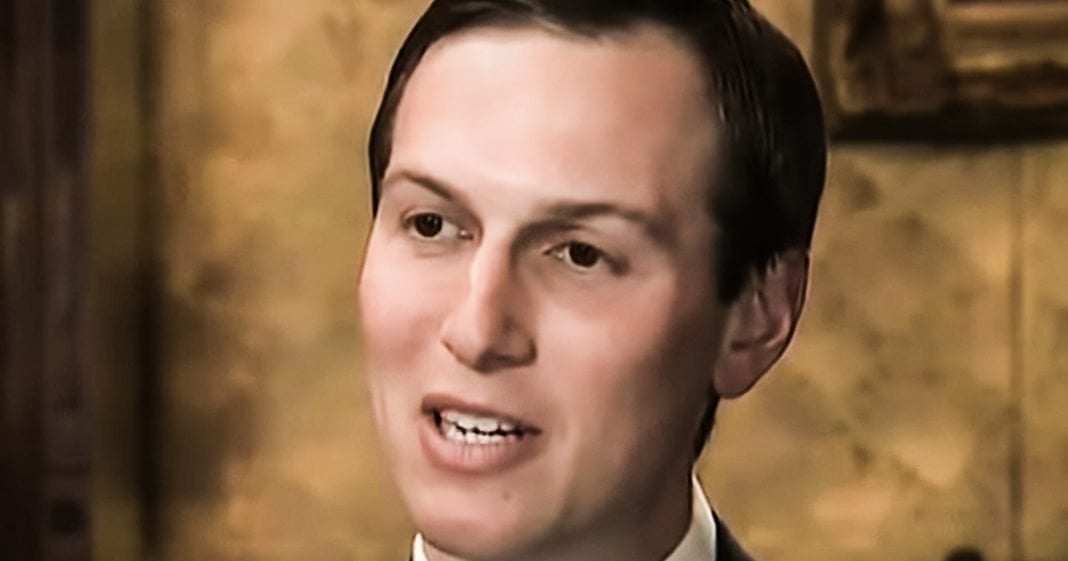 Jared Kushner has taken a more upfront role since John Kelly left as Trump’s Chief of Staff, and Republican lawmakers aren’t very happy about that. They have complained that Kushner’s ideas are too “simplistic” and that he is grossly overestimating the progress that he’s making on all of his projects – they argue that he’s made no progress on things like Middle East relations while lawmakers say nothing has changed. Ring of Fire’s Farron Cousins explains what’s going on.

As this country has become a little bit, obviously more polarized. I found that I typically do not agree with much of anything that Republican lawmakers actually do or say. However, I cam across a story this week where I have to say I do 100% agree with conservative law makers on this particular issue, and the issue I’m talking about is, is Jared Kushner a complete idiot? They, the Republican lawmakers think, yes, he is. I me also say, hell yes. Jared Kushner is a complete idiot. According to a new report from politico, Republican lawmakers are actually mocking Jared Kushner behind his back because he’s so stupid and has no idea what the hell he’s doing and all of his ideas for the two projects that he’s working on, which is a stabilizing relations with the Middle East and immigration, they say that all of his solutions are too simplistic. They also say, according to this politico report, that Jared Kushner tries to use his inexperience as a positive, saying that he is not weighed down by these preconceived notions of how things should be.

So he’s able to just go out there and get it done. They also say that Jared Kushner has overestimated how much he has accomplished and in reality, cause Kushner thinks he’s done a phenomenal job and has made huge progress. These Republican lawmakers say that, yeah, Jared really hasn’t done anything at all. Like, like literally nothing has changed because of Jared Kushner. And I agree with them and it’s nice to kind of agree with people on the right, right? You know, for so long you fight them and then you finally find this issue that unites us all, which is the fact that we can all agree that Jared Kushner is an absolute moron who has no business being in the Oval Office being in the White House at all. Hell probably even being just in Washington DC. But that is what we’re dealing with on the issue of the Middle East. Jared Kushner is essentially compromised as it is.

We know that other countries, according to reports had been talking about the fact that Kushner is easy to manipulate because he is inexperienced. He is naive, he’s not very bright, and he loves money more than anything. So tease them with a couple of sweetheart deals when he leaves office and then you’re going to get whatever you want. That’s what intelligence reports have said. Intelligence reports are telling us that other countries know how easy it is to manipulate this guy. Jared Kushner can’t be trusted. Jared Kushner is likely already compromise, and the next step is for these Republicans in DC to stop mocking him behind his back and to start doing it to his face, into the president and to the press. Don’t hide in the shadows and say, this guy’s an idiot. That’s the kind of thing that the public needs to know about. That’s the kind of thing that we all need to be aware of. Show that we can all collectively unite as one and demand that Jared Kushner be removed from his position immediately.