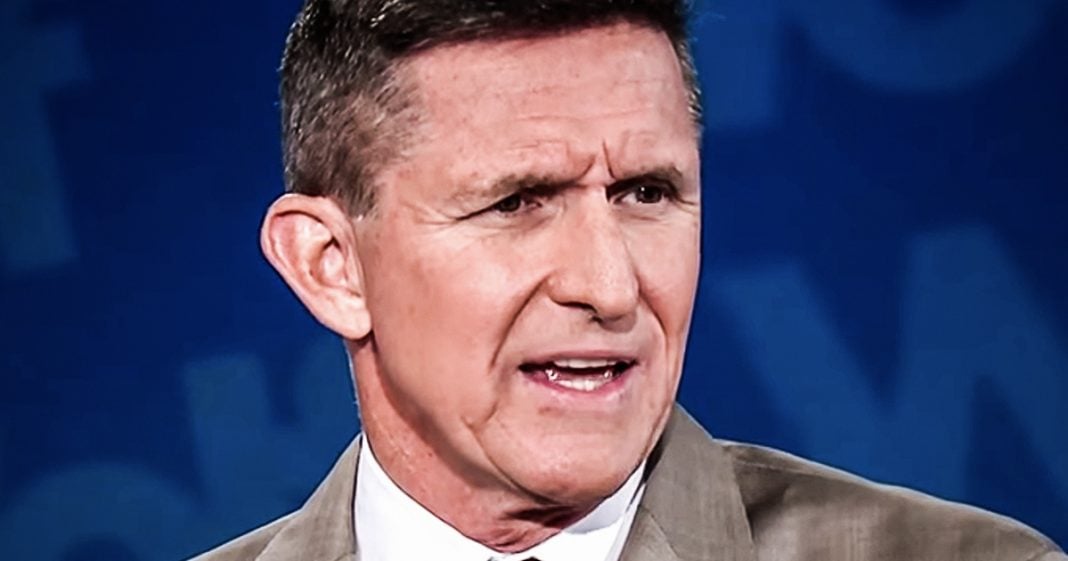 According to a sentencing memo regarding Michael Flynn, the former Trump national security adviser provided evidence to the special prosecutor both before and after his guilty plea showing that the administration, and certain members of Congress, were attempting to obstruct Robert Mueller’s investigation. This is the clearest intel we’ve received so far about Trump’s efforts to obstruct justice, and they really leave Congress with no choice other than to impeach him. Ring of Fire’s Farron Cousins discusses this.

According to the latest court filings regarding a former national security advisor, Michael Flynn, Flynn notified special prosecutor Robert Mueller on multiple different occasions about attempts from both the administration and from those connected with Congress to actually obstruct Robert Mueller’s investigation. One thing we know for certain is that there was a voicemail that was left for Michael Flynn’s attorney by Donald Trump’s attorney that essentially said, listen, we know you’ve probably made some kind of deal, but we just want to explain to you what, uh, you know, stark issue. This is, this is a matter of national security if you implicate the president in anything. So you know, the president and his feelings towards Flynn have always been great. Just take that into consideration. Now, they weren’t necessarily using the word pardon, but it’s pretty obvious from the voicemail, which you can actually find a partial transcript of that in the, a description of this video.

But that’s exactly what they were trying to hint at. Michael Flynn. Don’t go in there and throw Donald Trump under the bus. A bus for one. You’re going to basically put the United States in a horrible position. And you don’t want to be responsible for that. And to Donald Trump has always loved you and you know he can, he can do things for you should you get convicted of this. This was just one instance and this happened to be the one where Michael Flynn actually gave that voicemail to the special prosecutor’s office. They had that information, they had that intelligence. So at this point, knowing what we know now, knowing that Michael Flynn was repeatedly trying to warn investigators that, hey, they’re trying to obstruct this investigation. We have no choice at this point. But to conclude that Donald Trump obstructed justice, and I know we’d all pretty much all known that in the past, but as I’ve said plenty of times you cannot have obstruction of justice if you do not have intent.

And it’s pretty obvious from this voicemail that the intent was to change Michael Flynn’s testimony so that it didn’t harm Donald Trump. That’s intent. That is black and white, clear as day 100% intent to obstruct justice based solely on this one voicemail. Democrats in the House of Representatives should have already moved forward with impeachment. The articles of impeachment should have already been filed. That’s where we’re at right now, but those in the leadership in the Democratic Party, in the House of Representatives continue to drag their feet. They continue to kind of tease it out a little bit like, oh, we may have to use impeachment as an investigatory tool to get our hands on the documents that we want. Listen, you have obstruction of justice. Obstruction of justice is sitting in your lap right now. It’s sitting in court documents in courtrooms all over the DC area. It’s sitting in that molar report, including the redacted version that you have.

You could do this today. We could be wrapped up with it by 5:00 PM tonight. Right, but you’re not. You’re dragging your feet. You’re acting like, oh, we don’t want to make waves. We don’t want to offend any voters out there now, trust me. You may not have the numbers behind you right now on impeachment. You’re very close actually though, but you’re going to, once you start it, once you make it happen, you know, prior to all this, uh, talk about Medicare for all in the plans for Medicare for all, and explaining to people what it would do for them. Prior to that, a majority of people in this country didn’t support it. But then we started moving forward with it and showing them how great it would be. A now a majority do. Same thing would happen with impeachment right now. And if I’m wrong, than what’s the worst that could happen. Seriously, what’s the worst that could happen? Donald Trump doesn’t get removed from office.

Democrats still have a hard fought 2020 election. Those things are gonna happen anyway. So why not just go ahead with all of the evidence that you have right now and start impeachment proceedings immediately. It makes absolutely zero sense to continue waiting at this point.