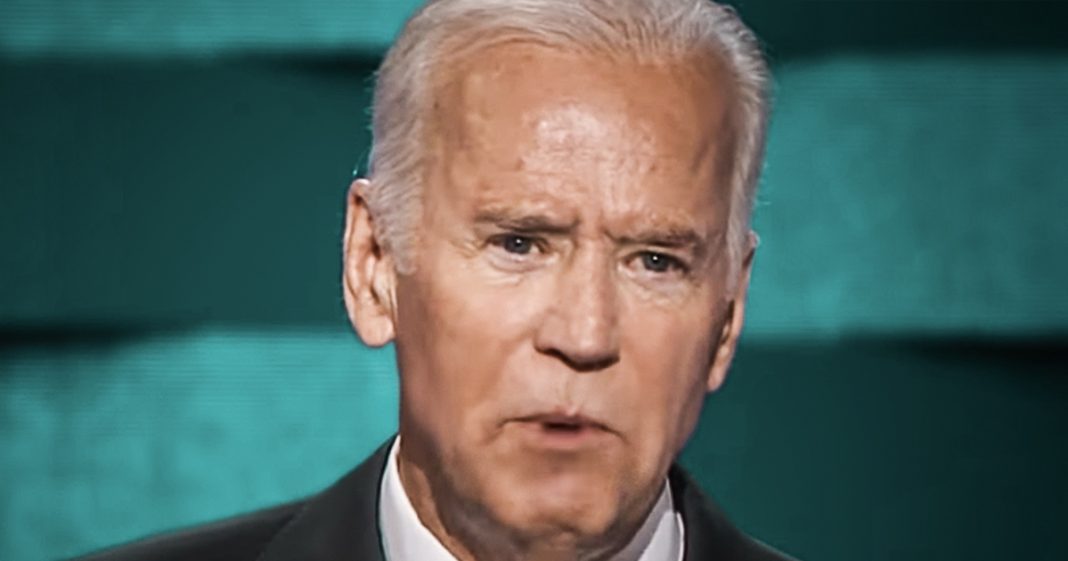 Joe Biden needs to learn how to say “I messed up,” because his history is full of screw ups. Recently, he’s been touring early primary states and defending his support of the 1994 Crime Bill by saying that it didn’t lead to more arrests or mass incarceration. Except that the facts say otherwise, and that is literally what the bill was designed to do. Ring of Fire’s Farron Cousins explains Biden’s unwillingness to ever admit that he was wrong.

Just so far this week. Joe Biden twice during stump speeches has defended his support of the 1994 crime bill, which he has actually taken the calling, uh, the Biden Crime Bill. That’s how proud he is of this thing. But he insists that no, this crime bill that I passed, it did not help incarceration rates in this country explode. It didn’t put more people in prison. It didn’t adversely affect minorities. Everybody needs to calm the f down. I’m Joe Biden. I voted for this thing, deal with it. It was a good thing. It wasn’t Joe. It was actually really, really horrible thing. And guess what? Not only was it bad, but it also did everything that you claims it didn’t do. It did result in locking up more and more minorities here in the United States. It put that horrible three strike policy into effect. It gave states more money to build more prisons and the more people they packed those prisons with the more federal money it gave them. So it incentivized locking up more people. It encouraged states to enact harsher penalties for smaller offenses.

Joe, what’s ridiculous about this is that people understand what it did. People can, can look at the statistics and yes, after the crime bill passed, incarceration rates went up. that’s really all you need to know. But what gets me about this, the same thing that gets me about everything Biden has done is the fact that this idiot won’t sit there and say, you know what? I screwed up. I messed up. At the time it seemed like the right thing to do, but in retrospect I can see that I was wrong and I regret it and it’s a shame I can’t go back and change my vote. You could say that about the crime bill. You could say that about Anita Hill. You could say that about the, uh, 2005 bankruptcy bill. You could say that about your Iraq war vote. You could say it about most of the things you’ve done throughout your history, Joe Biden, but you won’t. And that’s why Joe Biden is 100% a nonstarter for me. He refuses to acknowledge that he as a human being, as a senator, screwed up. You know, we’re dealing with same thing in the White House right now, folks. And I want you to understand the parallels between these two. Donald Trump will never admit that anything he ever did throughout his entire life was wrong. It appears that Joe Biden is the same way. Do we want that in the White House again? Do we want to replace what’s in there now with this? The answer honestly would be yes, Joe Biden would be 100 times better than Donald Trump. I would never encourage anyone to vote for Trump over Biden if Biden wore the nominee. So it’ll get me wrong on that.

Yeah, but we’re not to the actual Trump versus whoever it is on the other side yet are we? We’re in the primaries actually were well before the primaries. We’re not even 10 debates yet. So guess what? We still have a chance to prevent this man from becoming the nomination. And another thing that really gets me about that is, you know, Biden’s polling at the top. A lot of it has to do with name recognition. Clearly it’s not based on policy, but who are these people who are making his poll numbers shoot up? Because I follow on Twitter and other social media outlets, a lot of the hardcore left and a lot of the centrist Democrats, I’m very good friends with people on both sides of that.

And I don’t see any of them out there promoting Biden. So who are these people bolstering his poll numbers? It’s not the people who even, you know, our hardcore establishment supporters who are supporting Biden, they’re all in for Kamala Harris. So I don’t know where Biden’s support is coming from, but I can promise you there’s not as many people in this country who want this man to be the nominee as the polls would have us think. And that is comforting, that that makes us feel a little better because Joe Biden ain’t it. He’s not. When you look at what he has to say about all the horrible things he’s done in his past about all the policies he enacted that ruined the lives of American citizens, the bankruptcy bill, this, uh, 1994 crime bill, what he did to Anita Hill and has shown no remorse for that whatsoever. Yeah. Joe, you’ve ruined people’s lives and you don’t seem to care that you did it. And in fact, you’ve been out there this week bragging about that very fact.