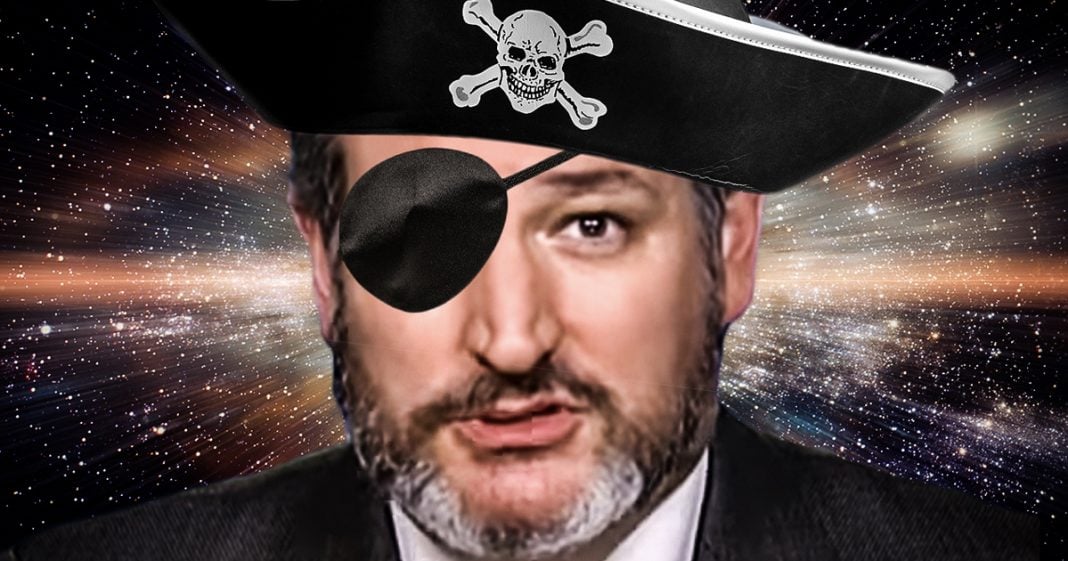 Republican Senator Ted Cruz may have seen one too many science fictions movies recently, as he warned us during a Senate speech that we need Trump’s Space Force in order to protect us against space pirates. Cruz then got angry at Twitter for highlighting all the criticism of his statements without showcasing his explanation. Ring of Fire’s Farron Cousins explains Cruz’s stupid comment and why his full explanation is actually worse.

One of the things the Republican party has always been really good at is telling us what we need to be afraid of. They create villains that are out there to somehow destroy American citizens are our way of life on a near constant basis, and yesterday Ted Cruz gave us one of the best villains I think Republicans have ever created, and those villains are space pirates, pirates, and outer space at is what Ted Cruz told us in the Senate. We need to look out for now, here is the exact quote from Ted Cruz. Pirates threatened the open seas and the same as possible in space. In this same way, I believe we too must now recognize the necessity of a space force to defend the nation and to protect space, commerce and civil space exploration from the space pirates, right? They’re just hanging out there in the atmosphere, just waiting and they’re little pirate spaceship to intercept us. Ships commandeer them, hijack them Shanghai the sailors, or excuse me, astronauts into servitude upon the space pirate ship. Is that what’s happening ted?

Now, Ted Cruz did elaborate a little more and what he was talking about, uh, is the fact that Oh, China’s allegedly developing missiles to take out satellites. So that’s what, that’s, those are the space pirates. But I think by definition, ted, those would actually be land people, not even pirates really, because if they’re just shooting missiles, isn’t that what pretty much every country does. We all just shoot missiles pretty much. That doesn’t make any of us pirates. But you said, you said space pirates, you said that, that’s a thing you said. But you were referring to missiles being shot from the land or from airplanes, whatever. From China, still not a space pirate. So you’re further explanation doesn’t make your original claim of space.

Pirates see many less ridiculous here. And I wish that was the end of the ridiculousness of this story, but it’s not, cause Ted Cruz got mad, got mad that the world was making fun of his space, pirate claim. And so we got on Twitter and he started yelling at a Twitter saying, Hey Jack, how come all the moments are about all the, the leftist attacks on me? And my space pirates claim, but none of those moments when you click on the moments tab are my further explanation of missiles from China. Maybe because nobody cared about your further explanation because it was equally stupid. Listen, there is a reason why countries on this planet and most of them for the most part, don’t just go around randomly bombing the crap out of other countries properties. The reason for that is because they know there will be retaliation, especially if you’re talking about something the US owns.

We’re constantly waiting at the ready to destroy any country that destroys something of ours. That’s why China’s not just firing missile straight up into space trying to destroy our satellites. It simply doesn’t happen. Russ has not doing it. The US isn’t doing it. North Korea is not doing it. Relax. Stop living in this constant state of fear thinking that every country is going to get us as soon as we turn our backs and we’ve got to spend $2 billion just to get the space force off the ground. Quite literally when in reality, Trump can’t even create the space for us because a new branch of the military has to be created by Congress, and right now they’re going to spend $15 million to study whether or not such an idea is even feasible. So Ted Cruz goes to the Senate floor, makes up crazy conspiracy theories about space pirates then clarifies that what I really mean is the Chinese military, which I guess according to Ted Cruz is now classified as a space pirate, but it’s all BS meant to scare you into letting Donald Trump and the Republicans create a new branch of military so that they can finally militarize outer space.