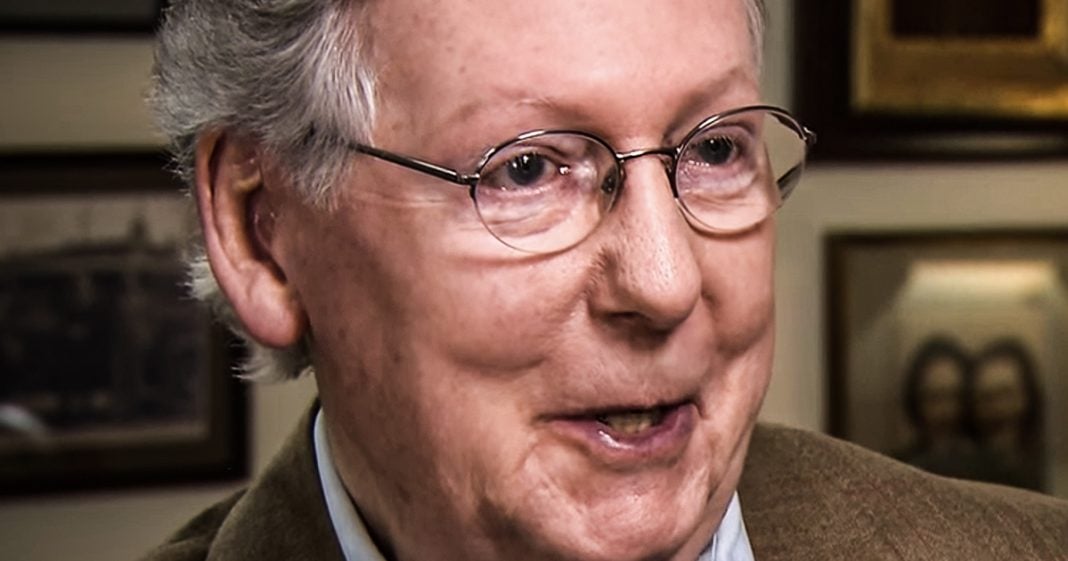 Republicans in Washington, D.C. are lying through their teeth right now, trying desperately to convince the public that Democrats are trying to get a do-over on the Mueller Probe with their current subpoenas and document requests. Because of this, Trump’s lawyers say, they won’t be complying with anything. This is a misdirection, as the Democrats are NOT trying to get a do-over on Mueller, but instead they are investigating financial crimes that the president has been implicated in. Ring of Fire’s Farron Cousins explains what’s happening.

You know, there’s been a recurring theme amongst, uh, Donald Trump’s lawyers and even those still sitting in the White House and the people they send out to, uh, talk to Fox News on a daily basis. And that is that they’re lying to us. Well, that’s nothing new though. They always lie to us, right? Except this time, the lie is the cover for Donald Trump and to make it seem like the Democrats in Congress are basically trying to get a do over on the Mueller probe. In fact, that is a word for word what White House counsel. Uh, Pat Cipollini actually said when he recently told House Democrats earlier this week that guess what? I’m not going to acknowledge your request for documents from testimony given to special prosecutor Robert Mueller. Pat Cipollini says that, no, you’re not going to retry the Mueller case. It’s done. It’s over. Move on. Find something else to do. Mitch McConnell said the same thing.

The White House itself has said the same thing. Other Republicans in the House and Senate have said the same thing. Rand Paul, Ted Cruz, you name them. They’re out there telling us, no Democrats lost Donald Trump won. You can’t redo the Mueller probe, but here’s the thing. They’re saying that as if that is what’s happening. They’ve been saying that actually in response to request for records about Trump’s financial activity, which had nothing to do with the Mueller probe, they want that information because the president in council, a testimony is hugely to Congress, which implicated in a financial fraud scheme. So yeah, they need those records to find out if in fact their witness Michael Cohen was telling the truth, but instead this White House has responded by saying that, no, you don’t get a do over on the Mueller probe.

This isn’t, this isn’t the Mueller probe. This isn’t even related to that. This is potential financial crimes. Something that would be pretty easy to prove and most likely did happen. Now these records request that Cipollini says, nope, you can’t have because you can’t do the Mueller probe over are actually important too because they’re actually a continuation of the Mueller probe. The reason is because in that probe, in that final report that we got to see pieces of Trump was implicated in at least 10 different instances of obstruction of justice. Democrats in the House of Representatives do have a responsibility and the authority right now to investigate that, to decide whether or not the prosecute for it.

They have every right to get their hands on those records. The White House has no right. As judges are telling us this week to deny it. But they’re going to continue to lie and spin this to make the public think that the Democrats are still trying to Redo the Mueller probe, get a do over, you know, call a model Mulligan on the first one. But that’s not what’s happening. They’re taking the information they have been given and they’re going forward with it because that’s what’s supposed to happen. Mueller was never going to bring charges himself against the president. He made that clear. So it’s up to the Democrats who control the House of Representatives to determine whether or not charges need to be filed. It was not. It has not ever been the job of the attorney general to exonerate the president. That was actually the job of the House of Representatives, and depending on how you look at it, they may end up doing that. They may also find out that the president obstructed justice at least 10 different times. We won’t know until they get their hands on those testimonies and those documents that they’re asking for, that Pat Cipollini is trying to hide and then mislead the public about what’s actually happening. They’re going to lose in court. The Trump administration is 100% going to lose in court. The only thing they’re hoping is that these court battles lasts long enough to where when they’re finally over, there’s a different majority sitting in the House of Representatives.