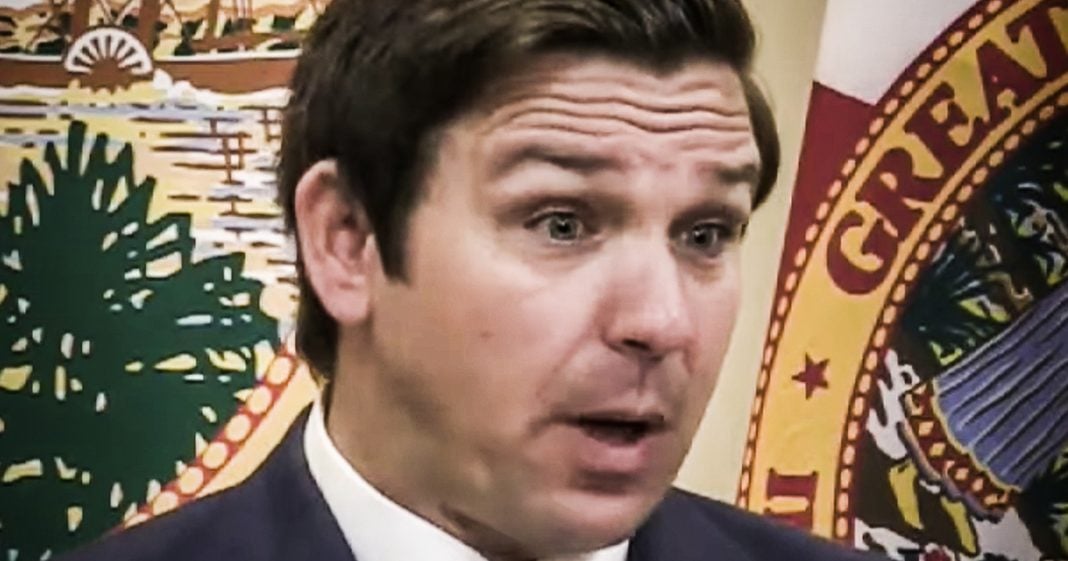 Florida Governor Ron DeSantis was furious when he learned from the Mueller Report that at least one Florida county’s election system was hacked in the 2016 election and he hadn’t been told. But now that he’s learned about it, and learned that there was a second county hacked, he tells us that he can’t tell us which counties. Our election systems were hacked, and Republicans won’t do anything about it. Ring of Fire’s Farron Cousins discusses this.

Florida’s Republican governor, Ron DeSantis is refusing to tell anyone in this state are technically anyone in the country which to Florida counties. Election Systems were hacked in the 2016 presidential election. Now, DeSantis only found out this information a few days ago after speaking to the FBI, but according to DeSantis, he was forced to sign a nondisclosure agreement in order to find out which two counties it was, and now we can’t tell us because that might let the hackers know that we know that they got in, which I’m pretty sure they already know that we know that they got in seeing is how they’ve already publicly announced that we know that they got in here is [inaudible]. This is a quote on this issue. He says they think if we named the counties that may reveal information to the perpetrators that we may know kind of what they did, but you’d have to ask them.

Meaning you’d have to ask the FBI. This was in response to reporters, Democrats, and even some other Republicans saying, Hey, I’m think maybe you could let us know which counties these were so we could take the necessary precautions and make sure they don’t get back in and to say it’s like, oh no, you had talk to these guys over here. I had to sign a piece of paper. It was confusing. I don’t know what I’m doing. Which is remarkable considering the fact that we learned from the Mueller report back in March that at least one Florida county had been hacked and at the time, this is how Ron DeSantis responded. He said, they won’t tell us which county it was. Are you kidding me? Why would you not have said something immediately? So now Ron DeSantis is doing the same thing that he got pissed off at the government for doing, which is, sorry, we’re not going to tell you republicans in the Senate, in fact, as recently as two days ago, a Republican Roy Blunt, who’s in Republican leadership in the Senate said, you are not going to do anything about election security in the United States.

We’re not going to do anything before 2020. Republicans aren’t gonna let anything like that pass, like not going to let it pass. They understand it’s a problem. They know it’s a problem, but because the problem seems to benefit them, they refused to do anything about it. And you know what, that is always the most remarkable thing about all of these voting, a hacking stories, the vote switching stories, the voter purge stories, the voter id stories, every single one of them for the last 19 years now has always helped Republicans. You always see Republicans, the ones out there and say, we need to an extractor voting, uh, requirements. Uh, we don’t need to worry about hackers getting into our systems. And the reason is because they are the only party that ever benefits from that. And they know that if we did something about it, if we got rid of the repressive voter id laws, if we actually strengthened our election security, got rid of these hackable electronic voting machines that are unreliable, even when they’re not hacked and switched to full paper ballots, they know that’s the end of them.

They’re done. And that’s why they won’t do anything about it. But right here, the state of Florida, the biggest, most important swing state in the country has been hacked. Now, according to what we know so far, the hackers who in this particular instance were from Russia, did not, as far as we know, change any vote totals. Hey, what? Why? Why would you even want to do that? Right? I mean, what’s the point of getting into a voting system just to say that you did it right, not because you want to change the outcome of an election. Of course. No, this is just solely for bragging rights. I don’t buy any of it. I don’t believe any of the official stories coming out right now because we’re not getting the full official story. And as long as they continue to not tell us which counties were involved in this, that puts every single county, not just in Florida, but across this country at risk.