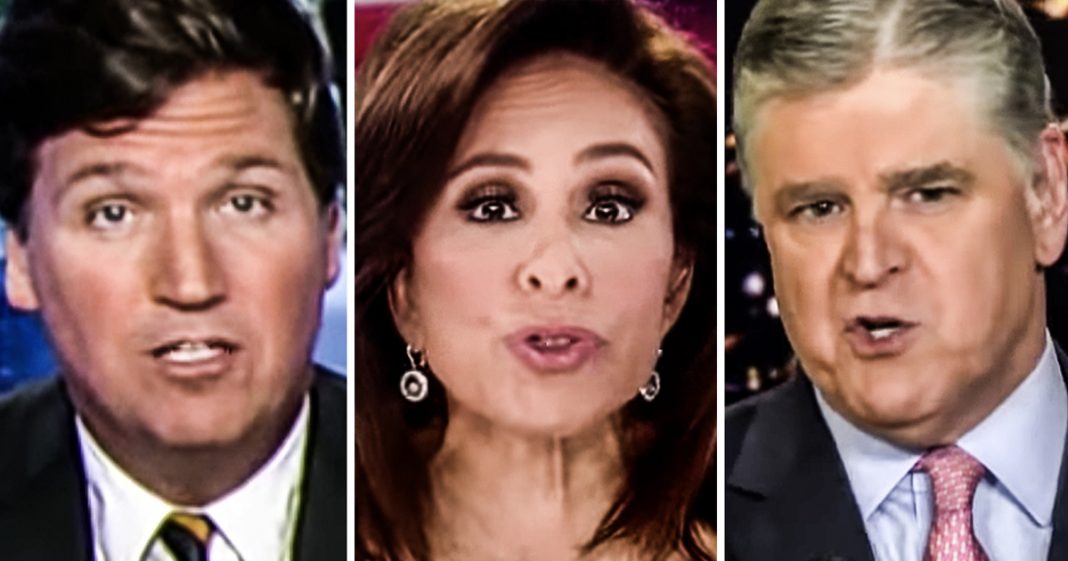 It isn’t a secret that the majority of the hosts on Fox News are absolute liars. But we’ve been told recently that the “news” division at Fox is annoyed that they are made to look ridiculous because of the lies from the headlining anchors. According to a new report by Media Matters, that news division shouldn’t want a spotlight on them, either, because they haven’t gone a single day this year without telling a lie. Ring of Fire’s Farron Cousins discusses this.

There’s been a lot of talk recently about Fox News is two separate divisions and that includes a lot of talk of this at Fox News itself. It’s actually how they’re trying to attract more advertisers by saying that, no, no, no, we don’t just have the opinion division with Hannity and Carlson and Ingram and all those other Weirdos. We also have the hard news division. You know, the people who were just reporters. There’s no opinion. It’s just the facts. So how about you come and advertise on these folks, right? Because they don’t lie there. They’re not being over bigots on the air. They’re not spreading conspiracy theories and propaganda for the White House. Well, according to a new report by media matters, they actually are, in fact so far this year, 2019, those hard news programs that Fox is now trying to sell to the advertisers. They haven’t gone a single day this year in 2019 without telling a lie.

This is a phenomenal new study by media matters. And, uh, again, I always have to say this, I have the utmost sympathy for the people who work at media matters. I’ve spoken to them over the years, they actually do have to sit there and basically just watch this garbage all day to monitor it, report on it and correct it for the public. So that can’t be a fun or easy job. My, my deepest respects to everybody who works at this organization, I do love what media matters, uh, does. Uh, but, but back to this study here, every day, at least so far this year, cause that’s as far back as they went. These hard news programs on Fox News are lying to their viewers. And these are the ones who are being sold to us as the programs that just tell it like it is. They call balls and strikes.

They’re straight shooters right out of the gate, right? No, they have the same agenda. They just have a different wrapper for it. Much like Donald Trump and the republican party, everybody wants to treat Trump like he’s some kind of aberration. But in reality he stands for the same thing Republicans stand for. He’s just a little worse with his personality. That’s the same thing with, you know, people like Shep Smith versus Sean Hannity. Sean Hannity is a horrible human being. Shep Smith actually seems like a pretty decent guy, but when you look at the numbers and you realize that, holy crap, Shep Smith occasionally tells the truth, but most of the time he’s still spouting the network’s lies that, that that’s not good. That’s not something we should be proud of. This is not a man we should be hoisting upon our shoulders as some kind of beacon of light in the darkness of Fox News.

Know Shep Smith. Again, occasionally brilliant moments of clarity the rest of the time, utter and complete garbage because that’s what Fox News is and I know there are some, honest to God real journalists working at the network, they are certainly not the people that they put on the air and they have grown more and more perturbed with the network heads because they’re not allowing their actual good reporting, honest reporting and truthful reporting to make it onto the air. Instead choosing to put all their stock and Hannity and Carlson and Ingram and all the other horrible people like those on the Fox and friends couch. But at the end of the day, if it’s on the air, on Fox News, you got to take it with a grain of salt because this new study proves that even those shows who swear to God, they’re not doing any opinion and just giving you the truth. They can’t even go 24 hours without telling you a lie.