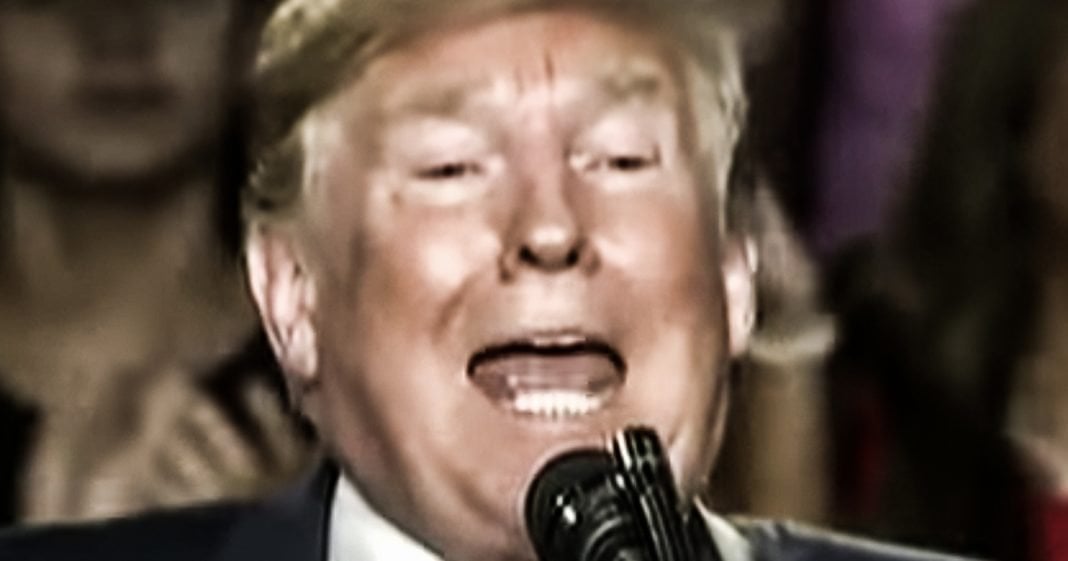 A federal judge on Tuesday issued a stunning rebuke to Donald Trump’s lawyers who have sued to block a Congressional subpoena for Trump’s financial records. The judge told the lawyers that their argument wasn’t good enough and that they didn’t seem to understand what kind of powers Congress has in terms of oversight of the executive branch. Ring of Fire’s Farron Cousins explains what happened.

Donald Trump’s legal team was in court yesterday trying to convince a federal judge that they need to basically kill the subpoena that House Democrats had issued a to get Donald Trump’s financial records. Luckily, this judge, uh, Amit Mehta, a US district judge in Washington decided that, yeah, that’s probably not going to happen because judge Mehta actually understands not just the rule of law, but our system of checks and balances that we have in place. Uh, judge meadow was very quick to smack down the Trump team’s legal arguments. See, the Trump team went in there trying to argue that, oh, Congress can’t subpoena his financial records because it’s not related to any pending legislation. And as such, they have no authority to do this because it’s really just a political witch hunt. And the judge said, yeah, that’s not how it works in Congress because Congress has a second job other than writing legislation.

Uh, their second job is actually oversight of the executive branch. You know, basic day one constitutional law type crap that Donald Trump’s lawyers, we’re hoping this federal judge didn’t know about. But the judge did know about it. And the judge made sure to let Donald Trump’s legal team know that and took the extra step of actually educating Donald Trump’s lawyers on how things work. In fact, the judge went as far as to say, given the fact that Congress does have oversight authority of the executive branch, I don’t know that I or anyone in the judicial branch should even be considering this issue because it’s well established. Even by the Supreme Court. The judge said that, yes, Congress can do this. Judge went on to say that under your own reasoning, I don’t know that the Whitewater investigation or the Watergate investigation could have taken place because neither of those were related to pending litigation or legislation.

Excuse me. However, after the judge issued is very stern rebuke to Donald Trump’s legal team and their legal argument, he did say that, I’m not going to rule on this today. I’m going to take a few days. This is obviously a very important issue. I’m going to take my time on this and make sure I do this properly, which is to be honest, probably the right thing to do. I know a lot of us would have loved to have seen an issue of ruling come down right then where the judge said, nope, they can subpoena and get the hell out of my courtroom next please. You know, almost like a fast episode of a judge Judy. But Judge didn’t do that. Jess, I’m going to take my time. It’s a big issue. We’re gonna wait it out. But here’s the thing. Whatever this judge decides to rule, and to be honest, it’s up in the air.

The judge could have issued those warnings in those, uh, you know, lectures to Trump’s lawyers and still come back and say, but you know what? I agree with you. That has happened plenty of times in courts all over this country since the founding of this country. I don’t think it’s likely, I think this judge a judge, Mehta, obviously understands the separation of powers and the oversight authority of Congress, and that there could be some pretty severe issues in Donald Trump’s financial records that Congress needs to know about, that the public needs to know about. So, yeah, I think, uh, I think this is going to go the way the lot of us hope it goes. And if it does, that’s going to set the precedent that’s going to set the groundwork for all of the appeals that are going to happen. Because regardless of what this judge says, good or bad, it’s going to be appealed.

So buckle up for the long haul because even after this judge’s ruling comes down, that does not change the fact that it’s still going to be appealed. That is still going to be fault and it will likely be fought all the way up to the supreme court. But the judges understand, and this is another thing, judge Mehta said that they want to delay, the Trump wants to delay it. They’re actually hoping they can delay it far enough to where by the time it goes to, you know, the next court or the next court after that or the Supreme Court, whatever it is, that maybe there’s a new congress that has a Republican majority, the Democrats are working on a limited time frame and that’s what their lawyer argued on Tuesday. Judge understands that the judge will respond accordingly as will future court appeals. This isn’t going to be a hugely, uh, you know, time consuming project, but it will take awhile. So take whatever this judge comes back and says with a grain of salt, because no matter which way the ruling goes, it will be appealed by one party or the other.