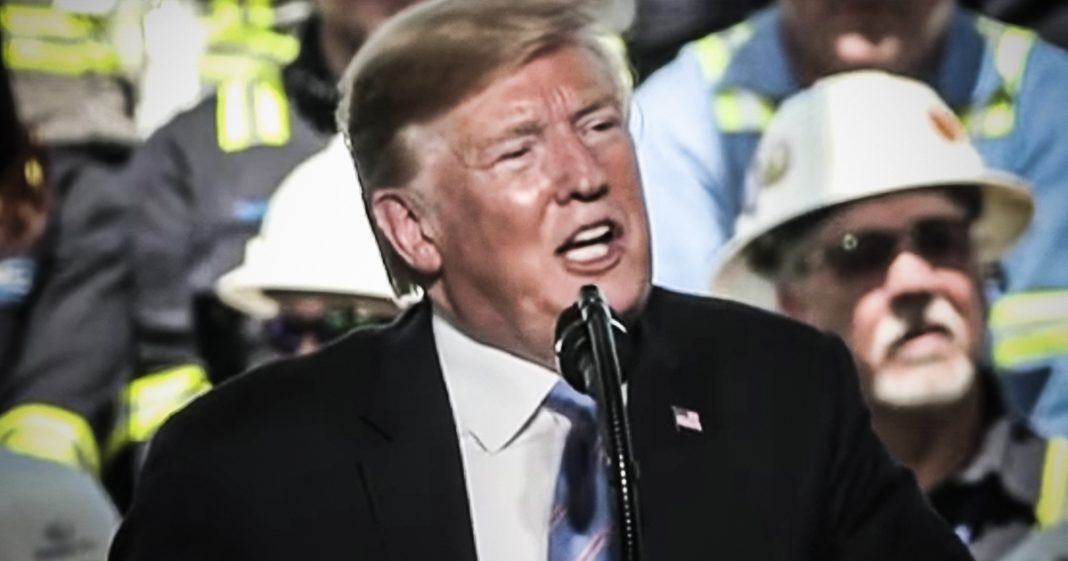 Trump gave a speech to a group of natural gas workers in Connecticut on Tuesday where he repeated his lies about windmills being giant death traps for birds, including bald eagles. He said that you can go underneath a windmill and see “piles” of dead bald eagles under them, which isn’t even close to being true. He made other ridiculous claims about the Green New Deal, and everyone in the audience cheered wildly for this madman. Ring of Fire’s Farron Cousins discusses this.

Farron Cousins:                   Yesterday. Donald Trump met with a group of natural gas workers in Connecticut where he delivered a speech that really you just kind of have to see for yourself

Donald Trump:                    And now they talk about the Green New Deal. The Green New Deal. Everybody go home. You just lost your jobs. The Green New Deal is that’s a hoax. Like the hoax I just went through, I’m not even sure it might be a bigger one and mine was pretty big. Mind was unlimited take, give it the green, new deal under that deal. I didn’t have this, this is a down, but John Kennedy bill under that deal. Everybody in this room gets fired. All of the thousands of guys and women standing on these buildings get fired. They go home because under the Green New Deal, they don’t like clean, beautiful natural gas. They don’t like anything. They don’t know what they like. They sorta like wind. Even though it kills all the birds. You want to see a bird cemetery go under a windmill. Sometime you’ll see the sadness. You got every type of bird. You know in California you go to jail for five years. If you kill a Bald Eagle, you go under a windmill. You see ’em all over the place. Not a good situation, but that’s what they were counting on wind. I, when the wind doesn’t blow, you don’t watch television that night. Your wife said, what the hell did you get me into with this Green New Deal, Charlie?

Farron Cousins:                   Okay, so let’s get this straight. Windmills are essentially birds, cemeteries. Um, although in that particular clip there, he did not make clear whether or not it’s because the birds are running into the windmills or if it’s actually the windmill cancer that he’s warned us about. Maybe it’s infecting the birds like super quick and they just dropped dead right at the foot of the windmill. We don’t know. But all we know according to the president is that those windmills, man, they’re just up there in the sky shredding birds left and right, including our beautiful bald eagles here in the United States, the emblem of this country. That’s not true whatsoever. Of course, wind mills not only do not cause cancer, uh, they don’t kill more birds. In fact, they actually kill fewer birds than buildings. Say like the ones that Donald Trump himself, phones, birds understand that you have to move out of the way of that thing.

They, they can see it, right? Not like a glass window on a building that they can’t tell is their windmills do not kill birds at any kind of alarming rate. They simply fly around them. They’re not like giant oscillating fans up there spinning at 200 miles an hour. They move relatively slowly. Birds in fact do land on them plenty of times. That’s how gentle they are. But nonetheless, moron is out there telling us that the birds are just dying left and right. There’s piles of them. I guess they got a guy that comes out everyday with a shovel to just get them all out of there. I don’t know where the giant bird cemetery is at that point, but what I do know is that, uh, this man is just lying through his teeth to these natural gas workers who apparently ate it up. I, you saw their reactions there.

They love that they loved him. Trashing the Green New Deal, lying to their faces, saying that it means every one of you is fired. Go home. Also, not true eventually could be, but you know what else the Green New Deal does. It would provide a jobs training program to take those same workers. They are, get them out of the fossil fuel industry and retrain them to work in the renewable energy industry. You know, a little bit safer there. You’re not around toxic chemicals. You’re not around those fracking fluids that God only knows what’s in those causing cancer. We do know there’s plenty of cancer causing toxins in fracking fluids, but sure, go ahead and clap for the mad man because he’s lying to you and you know it. That’s what’s so disgusting here. We know that Donald Trump, anytime he gives a speech, it’s going to be incoherent.

It’s going to be slurred as that one was. Something seemed off with him. Again, he’s gonna lie to you and the people are going to eat it up. At this point, I’m more disappointed in the people in that audience because they should know better. They do know better. They’re choosing to not know better because they’ve all fallen into the cult of Donald Trump. That’s what this is. We’re dealing with a cult like mentality. He can lie to their faces. He can say things they know are not true, but they’re going to make the conscious choice to believe this false hood instead of what they know to be reality. That’s what we’re fighting against here in the United States today. It’s not just Donald Trump, it’s the followers. It’s the people who refuse to use their brains, think clearly and understand that this man is not to be trusted, that he is a con man.

Everyone who has worked with him over the years will tell you that. I mean the people who wrote his books for him, the people who served as executives who have left the company and people still working format. They’re not going to say it just yet, but I promise you like the other people who are no longer associated with him, they cannot wait to tell you what a horrible human being he truly is. What a con man he is and what a liar he is. The people who fall blindly into this, Donald Trump colt need to understand that that’s what happens. If you trust him, he is going to let you down. He is going to screw you over at the first opportunity. So those people in the audience, they’re the ones cheering, clapping for these very obvious lies. Those are the people that I’m more upset with than I am about Donald Trump and his stupid lies about windmills killing all the birds.