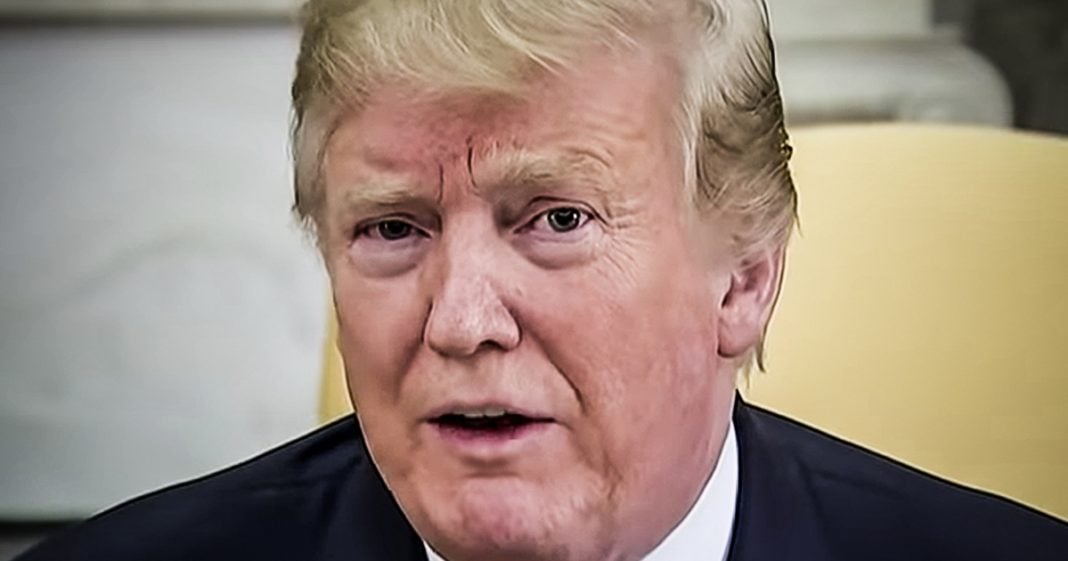 Donald Trump has now gone from a billion dollar loser to a trillion dollar loser due to the fact that his idiotic trade war with China cost the global economy $1 trillion on Monday. $1 trillion in stock value was lost as a result of the escalating tensions between the two countries, but Trump swears that he has China right where he wants them. Ring of Fire’s Farron Cousins discusses this.

On Monday, Donald Trump costs the planet $1 trillion. And he did that by basically causing everyone who could to sell off their stocks during a trading on Monday because they were terrified about what was going to happen with the escalation, with the trade wars between the US and China. And the reason I’m pinning all of the blame on this, uh, for this on Donald Trump is because he is the one who started these trade wars. Yes. Part of the sell off that happened Monday was a result of China announcing they’re putting 60 billion in tariffs on us. Good starting June 1st. But they did that in response to what the United States, specifically Donald Trump has done to them. 100% of this is Donald Trump’s fault. So yes, Donald Trump is the one who lost the globe, $1 trillion in a single day. Now for the 50% of people in this country who have no money whatsoever in any kind of stock market that doesn’t necessarily affect us right now in the future, if these losses continue, it absolutely could.

We could see, you know, this trickle down, a depression or recession start happening that eventually would affect all Americans. Whether or not you have money in the stock market for those with money in the stock market for people with pensions, depending on the stock market. Yes, this is very, very bad news. It’s also really bad news, obviously for the super wealthy to people who own most of the stocks across the planet. They just lost $1 trillion yesterday and there is nothing that’s going to get the Republican party in more trouble than when rich people lose money off their policies. This isn’t going to end well for the Republican Party. Donald Trump doesn’t seem to care because he even told us yesterday, he is trying to right where he wants him right where he wants him. He swears they’re totally ready to make a deal, even though it was actually just announced two days ago that, yeah, there’s no scheduled negotiations at this point.

There no scheduled talks. There is no deal in sight by either party, and China’s actually pissed off because the United States lied to them and that’s why they’ve retaliated. They’re not ready to make a deal. They’re not close to making a deal. Donald Trump is absolutely lying to the American public, not just about what’s happening with China, but about the tariffs in general. People in this country are suffering, not just those with the stock market drop yesterday, the farmers are suffering, the manufacturers are suffering, their consumers are suffering because we’re the ones paying the price. People are their jobs over this. They’re losing their family businesses, family farms, declaring bankruptcy at a rate not seen in the past decade. That’s a problem, and it’s a problem that was 100% created by Donald Trump himself because he doesn’t know what he’s doing. One of the reasons Donald Trump has said that he started this trade wars because for too long, China’s taken advantage of us. We’re all getting screwed. Ladies and gentlemen, his base believes it. You see it in the responses on Twitter. They say, no, we gotta muscle through this and get by. So China stops taking advantage of us. Okay, well, you know what, admittedly? Sure. There were some trade deficits there.

But let me ask every consumer watching this video, did you ever feel at any point in the last 10 2030 years that you were being taken advantage of by China? That at any point, the price you paid for a good was the fault of China. Did you ever actually blame them for it? Did you lose any sleep over it? Did you have to go to anger management classes because you were so pissed off about what China was doing because of the cost of your TV or the cost of your steel that you’re buying? I can go ahead and answer that for you because the answer is no, you didn’t, you didn’t even know what the trade deficit was. Most of us can’t even define what a trade deficit is because it’s that in consequential for the most part.

And yet here we have a man who also doesn’t understand what those things are, how they work. Just like average Americans who go about their days, never even having to think about it cause it doesn’t actually affect you. And then we put one of those people in office and he comes along, he starts this trade war, does the dumbest things imaginable. Then he lies to our faces about why he did it and what kind of effect it’s having on this country. That’s the man sitting in the Oval Office today, and that man is Donald Trump, and Donald Trump is solely responsible for the global economy. Losing $1 trillion in one day.