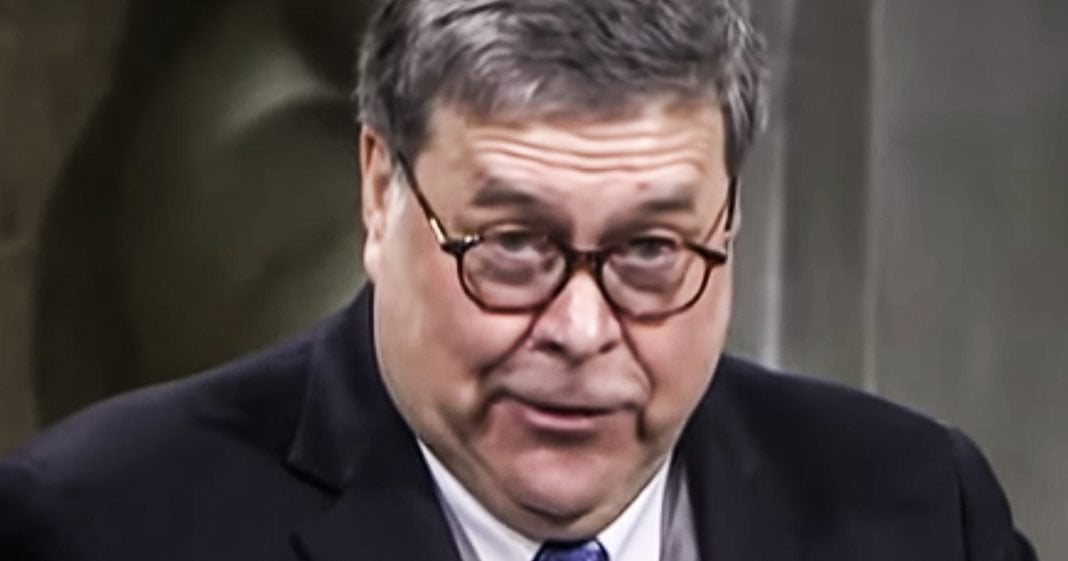 According to the Associated Press, Donald Trump’s Attorney General William Barr has appointed a US Attorney to investigate the origins of the Russia probe to determine if the investigation was actually conducted and started based on real, solid reasoning. The president is desperate to prove that he is the victim of a witch hunt, but this investigation is likely going to show us something else entirely, as Ring of Fire’s Farron Cousins explains.

The reports on this are still a little scarce. As source close to the Associated Press has reported that William Barr has appointed a US attorney to now investigate the investigators who launched and conducted the Russia probe and he wants to make sure that all of the, uh, intelligence or evidence gathered during that investigation was gathered in accordance to us law. What’s happening is that Donald Trump’s attorney, William Barr, because I don’t think it’s appropriate to actually even call him attorney, generally eat anymore. He is Donald Trump’s lawyer. Trump’s lawyer, William Barr, wants them to pay once the intelligence communities to pay. Trump wants the intelligence communities to pay. That’s why he’s out there attacking his own appointed FBI director because the FBI director wouldn’t do this because he knew it was a waste of time. William Barr, on the other hand says, Oh, I’ll find you a US attorney to look into this and we’ll totally exonerate you and make all your claims of illegal spying and, uh, Lisa Page and Peter Struck all of that.

It’ll all come to light and you’ll look like a visionary and the public will love you even more. One with her, a curve ball at you here in. So I actually 100% support this investigation by William Barr. I think it’s a good idea. Why? Because I think it’s going to make Donald Trump look like an absolute moron. Yeah, it’s going to be a waste of time. It’s going to be a waste of resources and they’re essentially already investing, gating, something that’s already been investigated and proven to prove Trump an idiot. But you know what? What the hell? Do it again. Do it again and again and again. Let’s just keep investigating this and every time it’s going to come to the same conclusion. And that is that there was plenty of evidence in place long before Christopher Steele ever entered the picture to launch this investigation. All of the warrants necessary were obtained.

The rule of law was followed, and it wasn’t. A couple of lovebirds in the FBI who started some kind of deep state conspiracy to take down Donald Trump. Investigate to your heart’s desire. I say, because every time you do, all you’re doing is proving those deep state conspiracy theorists wrong. You’re proving the president wrong and you’re showing this country that, yeah, we’ve got a lot of problems with our intelligence agencies, but this didn’t happen to be one of them. So yeah, I support this. I like this idea and you know what, if I’m wrong and if this us attorney does uncover real evidence that there was some kind of coup in place in the FBI, then that is something we should know about. There are 0% of me that believes that will, but if it did, yeah, we probably as a country should know that that was taking place. So either way, the results of this are going to be great because if there was something happening, we need to know about it. And if everything was on the level than every single American citizen, especially those in those MAGA hats, they need to understand that the president’s been lying to them about some kind of deep state conspiracy theory since the day he was sworn into office.