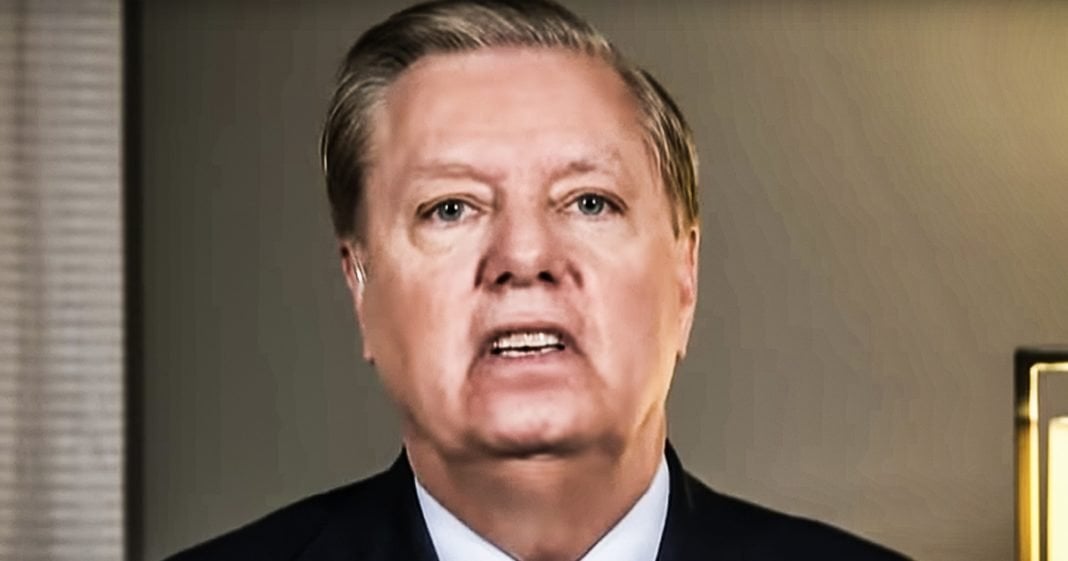 Republican Senator Lindsey Graham doesn’t want Donald Trump, Jr. to respond to the subpoena that he recently received from the Senate Intelligence Committee because he doesn’t believe that Trump did anything wrong. That isn’t for Lindsey Graham to decide, but he went ahead and made that decision regardless. The Republican Party has abandoned the rule of law in order to protect Trump, and the public is going to remember this for a long time. Ring of Fire’s Farron Cousins discusses this.

On Sunday. Lindsey Graham during an appearance on Fox News made it apparent that he believes the entire Trump family is above the law. Lindsey Graham told us on Sunday that if he were Donald Trump junior’s lawyer, he would just tell them to ignore the subpoena that we all found out about last week that the Senate intelligence committee led by Republican Richard Burr issued for him to come back and basically re testify because it’s pretty obvious that he lied to the Senate last time he was there. But Lindsey Graham is okay with that. Lindsey Graham thinks that Donald Trump Jr. should just ignore a subpoena, which you legally can’t do without, you know, uh, punishment. But he says to hell with it, Trump Jr. did nothing wrong. And even if he did, I don’t want to know about it. Get on with your life. Downey Jr.. In fact, here is the exact quote from Lindsey Graham. If I were Donald Trump junior’s lawyer, I would tell him, you don’t need to go back into this environment anymore.

You’ve been there for hours and hours and nothing being alleged here changes the outcome of the Mueller investigation. I would call it a day. Here’s what this dumb asses doing here. Lindsey Graham is using the same kind of full, a flawed, faulty logic that other Republicans are using. They’re trying to spin this as oh Democrats or Republicans or whoever the enemy is today is trying to change the outcome of the Mueller investigation. This has nothing to do with that. This has nothing to do with that, and yet republicans try to insert the Mueller investigation into every single conversation they have about the Democrats. What’s happening right now is we need to know Richard Burger. The Republican in charge of the Senate intelligence committee demands to know whether or not Trump Jr. lied in his testimony, whether or not he committed perjury. That’s what’s important. This has nothing to do with Mueller.

This has everything to do with whether or not this man, Donald Trump, Jr. lied under oath to separate issues. Lindsey, I know your tiny little brain is incapable of separating things into two different categories because God forbid you think about two things at once, but other human beings do have that ability and that’s what they’re trying to do here. Michael Cohen specifically said during his house testimony a few months ago that he had been updating Donald Trump Jr. and Ivanka Trump at least 10 different times about Trump tower Moscow in 2017 when Donald Trump Jr. came and testified in the Senate, he said he knew very little, pretty much nothing at all about Trump tower Moscow. He wasn’t in the loop. Nobody told him anything. That’s a lie. As long as what Michael Cohen said is the truth. If what Michael Cohen said is a lie than what Trump Jr. said might be the truth. The point is the Senate wants to get the answer on that, but Lindsey Graham doesn’t think he should have to do it. Ted Cruz doesn’t think he should have to do it. Ran. Paul doesn’t think so. Mitch Mcconnell is kind of wishy washy now after saying he did things, so now we may think so. Now. He doesn’t think so. Who knows?

Marco Rubio says, man, maybe it’s okay if he testifies. I don’t know. I don’t want to have an opinion because I don’t want to piss anybody off. The bottom line is this, the guy was subpoenaed. You have to respond or risk being held in contempt, which they can do. They likely won’t do, and I think Trump knows that junior right now is holding all the cards and that’s sucks. It really sucks. But his other option is to show up, lie again, or provide evidence that Michael Cohen, Leiden junior told the truth or simply plead the fifth amendment, which is really probably going to be just as bad as admitting that he lied because if he goes in there and pleads the fifth, everybody in this country is already going to go ahead and assume that. Okay, and then yeah, he lied. He just doesn’t want to admit to it.

There should be no good outcome of this for Donald Trump Jr.. But unfortunately with the way republicans like Lindsey Graham or behaving Trump Jr.’s likely to walk away from this unscathed, even if he chooses to ignore that subpoena. And that’s what’s so depressing about the Republican party in their complete disregard for the rule of law today.