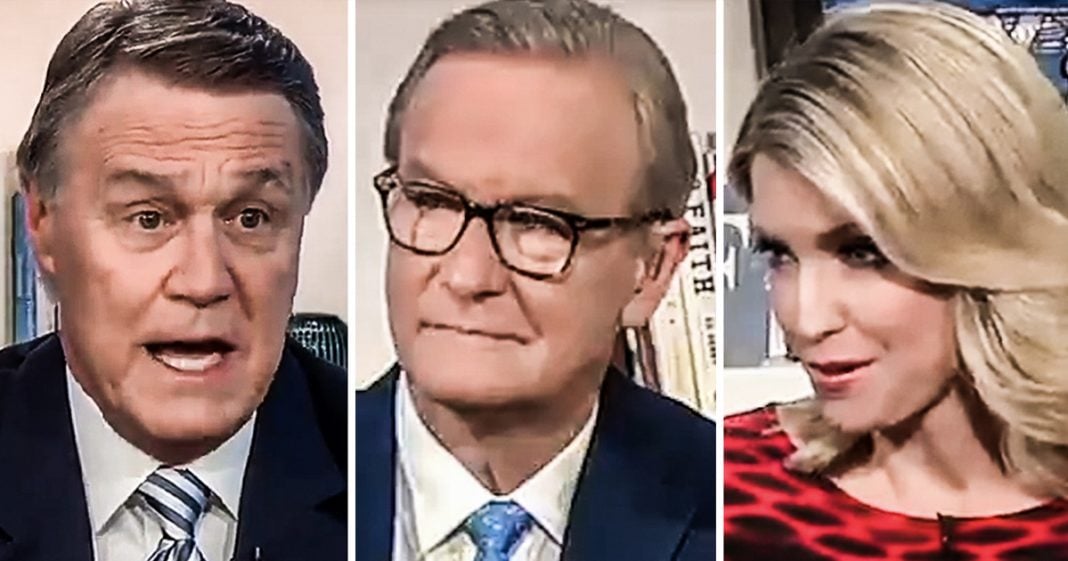 Fox News host Ainsley Earhardt and her co-hosts at Fox & Friends repeated the false claims that Democrats across the country are passing laws that will make infanticide legal, and that this is the future that Democrats want. The Republicans are getting beyond desperate to try to fight back a rising tide of liberalism in this country, and their lies are becoming more and more extreme as they panic. Ring of Fire’s Farron Cousins discusses this.

Farron Cousins:                   On Monday, Fox and friends brought on Georgia republican state Senator David Perdue to talk about the state’s new heartbeat abortion ban, which essentially bands any abortion. After about six weeks of pregnancy during the segment Ansley Earhart, the Co host of Fox and friends decided to repeat the false claims that Democrats want to abort babies after they’ve been born. Take a look at the clip.

Ainsley Earhard:                  It’s definitely in the forefront of our minds now. I can get back fired on this. Democrats, when they all said, you can have an abortion even after the baby’s born or killed the baby after baby’s born, so.

David Perdue:                       Until I guess what’s so ironic, we’re talking about this law in Georgia. Nobody’s even talking about what has just been passed in the state by the Democrats. I mean that is outrageous. Infanticide is where they have gotten to. This regime on their side has gotten so radical that they think that’s okay.

Farron Cousins:                   There are several things that this clip proves. First and foremost, it’s that most Republicans, at least those in positions of power, which actually includes those on Fox News, don’t understand science because technically, I mean if we’re talking about a very technical, basic definition of it, you can’t abort a child after it has been born to at six weeks. It’s still essentially a cluster of cells. The cells that are 100% in capable of surviving outside of a human body, and most women at six weeks of pregnancy don’t even know that they’re pregnant yet, but more importantly, it also shows us the links to which Republicans are willing to go to undermine and attack Democrats. There is not a single democrat in this country who’s come out and said, yes, let’s kill infants right after they’re born. That sounds like a good idea. Nobody wants to do that. No legislation has been passed that does that. I know you want to think it did, but what that legislation you’re referring to actually talks about is when you give birth to a child that is not viable and immediately has to go on life support. Do you pull the plug? That’s what that bill is referring to and allowing parents to actually have the decision to do that instead of watch their newborn child struggle for hours or weeks on end and then die.

That’s what that bill is about. A horrible, heartbreaking decision that some parents do have to make. But Republicans would rather lie to your face and say, the Democrats want to kill babies. Democrats want to kill anyone in everything and women just need to suck it up and have that baby and take care of it. But God forbid they ever need assistance. They ever need, you know, welfare or food stamps or a education or a college education or healthcare in general because then you’re on your own. We don’t give a damn as Republicans if you live or die, as long as you’ve had the baby after that, you’re on your own. The baby’s on its own. Best of luck to you. We’re also cutting school lunches, uh, funding for, for needy people. So I hope you can feed your kid at home. Republicans are the party that’s totally cool with kids dying after they’ve been born. That’s the irony here. All of their policies over the last 40 to 50 years have said, we don’t give a damn if your children or yourself live or die, we’re letting corporations pollute more.

We’re letting them pump toxins into the waterways. We’re letting them get away with literal murder, but we’re not going to let a woman who’s six weeks pregnant terminate that pregnancy if she was raped, if she wasn’t prepared for it, if her birth control failed, nope. Oh, well, best of luck to you. Good luck with that. Six to $7,000 medical costs up to the birth because we’re not helping you with that either. There is a party in this country that doesn’t care if babies are killed after they’re born, but it sure as hell isn’t the Democrats.