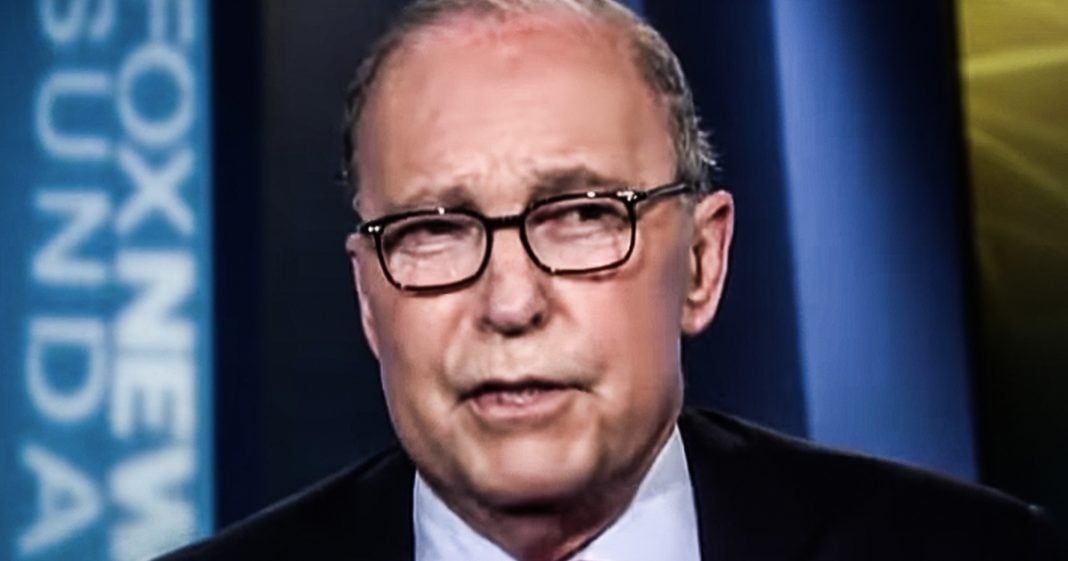 Donald Trump’s economic advisor Larry Kudlow accidentally admitted the truth during a Fox News appearance on Sunday, when he said that American citizens are the ones who are actually paying the tariffs that Trump has placed on China. Trump wasn’t happy with this comment, and took to Twitter to lie about who is really paying the price. Ring of Fire’s Farron Cousins discusses Kudlow’s rare moment of honesty and Trump’s response.

This past Friday, Donald Trump announced billions upon billions of more dollars on tariffs on Chinese goods coming to the United States. This morning, China announced that they were going to retaliate with $60 billion in tariffs on goods coming from the United States to China, and on Friday as well, Donald Trump announced that he wanted an extra $15 billion to hand out to Midwest farmers who have been negatively impacted by his trade wars. Then on Sunday morning, Trump’s economic adviser, Larry Kudlow, appeared on Fox News with Chris Wallace, where he admitted that, yeah, Americans are suffering because of these tariffs, and they are the ones who are actually having to pay the price. That to me, that statement, that little moment of truth from Larry Kudlow, the guy who is basically spent his entire career even when he was on CNBC lying to benefit the Republican party. That statement, not only was it huge and revealed what most of us already knew about the the tariffs and the trade war, but it also happened to piss off Donald Trump.

So here’s what Trump did. Trump gets on Twitter, it says Americans shouldn’t be paying these tariffs. It should be China. And if you don’t want to pay the higher prices that China’s slapping on their goods just by American. But this also shows you how disconnected from reality the president actually is. As we have reported, as plenty of other folks have reported, Americans are paying the price, not just on goods, uh, used with the, or built with the goods from China that have the tariffs on them. Even American made goods that don’t rely on any of those tariffed goods. The prices on those have also gone up so that they stay competitive. I, they could be cornering the market right now by having the lowest prices because they’re not subjected to tariffs. But instead green took over because that’s what capitalism does. And they raised their prices as well, even though they didn’t have to.

They wanted to stay right within that margin of what everybody else is charging too. So we’re just getting screwed all around you. By American, you’re getting screwed. You buy something made in China, you’re getting screwed. You Support Donald Trump value, you’re getting double screwed at that point. You’re a farmer. Yeah, you got screwed, but don’t worry. We’re going to come give you some socialism in the form of another $15 billion. Just so you remember who bailed you out when the 2020 election comes calling. It’s also the same guy who puts you in that predicament in the first place, but he’s hoping you forget about that. You just remember the 15 billion that you got rather than the man who bankrupted you, your family’s farm and everything you’ve worked for generations for Larry Kudlow by admitting that Americans are suffering did something that we have not seen this administration do yet, and that is admit that his policies are harmful to everyone.

Admit tacitly, he didn’t expressly say this, but admit that they’re not working properly. As it stands right now, there are no currently scheduled talks between the US and China. So as China puts their $60 billion in new tariffs on American goods that are going to kick in on June 1st Trump announced his on Friday, as I previously mentioned, this trade wars just escalating. And we already know that it’s costing consumers billions of dollars every single month. Consumer is not the country consumers, because that’s the thing, folks, the federal government’s doing great off this because yeah, China has to pay the tariffs. They then pass that cost on to us so they can recoup it. So they’re doing fine and the treasury is doing great because they’re the ones who collect the terrorists. They’re making a ton of money. It’s just everybody else that gets screwed in the process. But finally, and probably regrettably for him, Larry Kudlow admitted the truth.