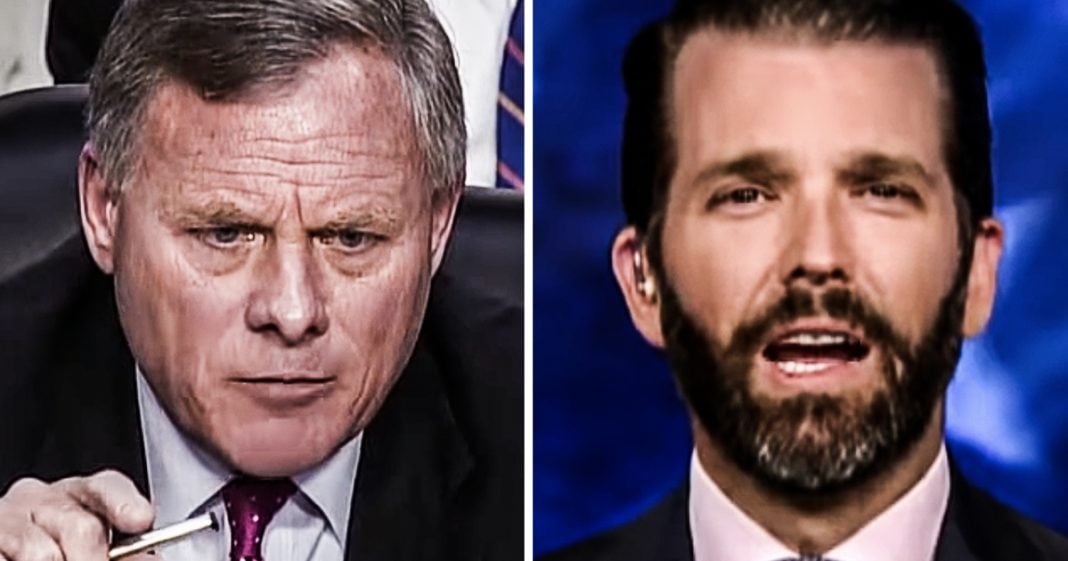 Republican lawmakers are turning on one another over the fact that Republican Senator Richard Burr issued subpoena for Donald Trump, Jr. Burr is in the right on this issue and he’s wants answers, while other Republicans would rather bury their heads in the sand and pretend that the Trump family can do no wrong. Ring of Fire’s Farron Cousins explains what’s happening and how it could come back to harm these angry Republicans.

So there’s been a bit of a meltdown happening in the last few days within the actual Republican Party. And it’s a meltdown that’s almost in fact by some media outlets as being described as a civil war. And what this civil war has erupted over is the fact that Republican Senator Richard Burr, the chairman of the Senate Intelligence Committee, issued a subpoena to Donald Trump Jr. because he believes that Trump Jr. lied during his 2017 testimony about the Trump tower Moscow talks. So again, uh, Richard Burr, Republican chair of this committee issues the subpoena and suddenly all the other Republicans in the Senate and some in the house start freaking out. How dare you go against the Trump family like this? The Mueller report said, it’s over. None of this is relevant. This doesn’t matter. We’ll see guys. Here’s the thing. Um, if he lied to Congress than it doesn’t actually matter what’s in the Mueller report whatsoever because that’s not what this is about.

But you guys want to make everything about the Mueller report because for some reason you think it totally exonerates the president, which in fact it does not. It, it implicates them in multiple different, uh, things, including at least what 10 counts of obstruction of justice. So yeah, that’s not an exonerating document, but feel free to keep bringing it up every opportunity you get because that’s not working very well for you. So who are these Republicans who are so pissed off with Richard Burr? Well, first of all, you have Thom Tillis. Uh, the other Republican from South Carolina who is not happy that Richard Burr has done this. Um, you have, uh, John Cornyn from Texas. Uh, he said he understands the younger Trump’s frustration with all of this. You have ran Paul who tweeted out that bird didn’t get the memo that the Mueller case was closed.

Ted Cruz tweeted out that there’s no need for another subpoena for Donald Trump Jr. It’s time to move on and focus on issues Americans care about, which is actually funny coming from a guy like Ted Cruz who spent years in the Senate not caring about the issues that Americans care about. But if you’ve noticed, and I know this is a bit of an aside here, Republicans have been saying that a lot recently. You’ve had Matt Gaetz From My district here in Florida say it like Democrats are so obsessed with investigating Trump. We should all be focusing on issues in legislating guys. You’ve had plenty of time to legislate and you’re choosing not to. You’ve chosen not to, some of you for decades, those who’ve been there that long. We want action on climate change. We want Medicare for All. We want gun control, we want debt free college. We want to increase the minimum wage. You guys are just choosing to not do any of that because you basically all suck at your jobs.

There’s no other way to say that you guys suck. But now, now that we think members of the Trump administration may have committed some crimes that we can easily prove crimes that actually have nothing to do with the Mueller report. You guys are suddenly like, oh, and then we need to, well, let’s get to work. Guys who had gotten legislation to do, I’ve got to move these papers over here. No. You guys should be sitting on your butts. Do an absolutely nothing cause that’s what you’ve done for your entire career in Washington DC. You’re running cover for the president and his son because you understand how damaging his testimony could be. Michael Cohen Implicated Donald Trump in a lie to the Senate, and that’s what Richard Burr is doing. I don’t agree with most of what Richard Burr has done throughout his entire career, but this I do. Why? Because we need to send a message that no member of the Trump family or the Trump administration is above the law. And unfortunately, there’s not enough good Republicans in Washington DC or health throughout the entire country for that matter, who are willing to actually send that much needed message.