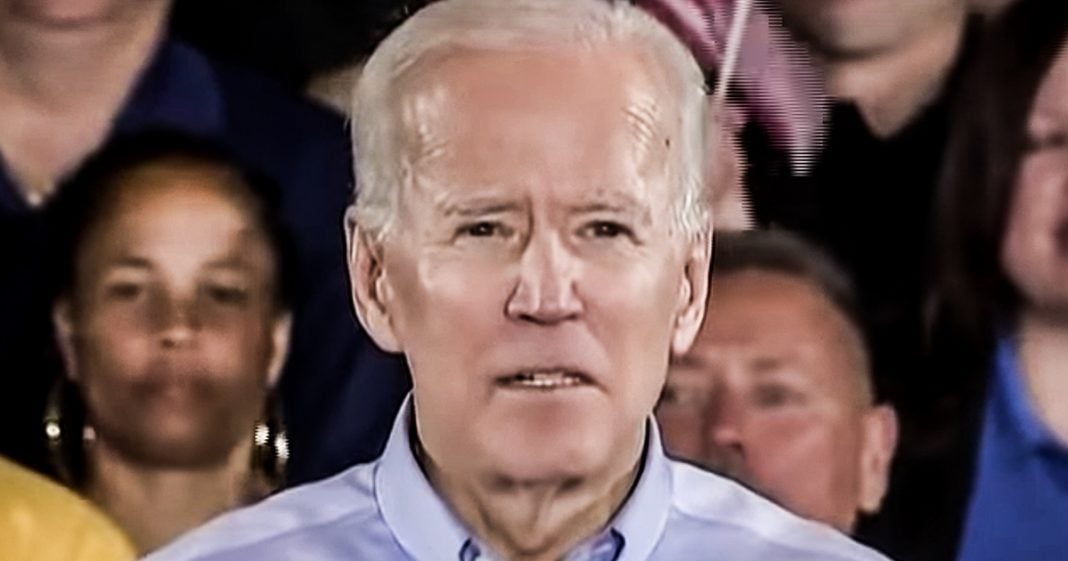 Joe Biden said recently that he wants to find a “common ground” solution to climate change, which really means that he isn’t going to do anything about the problem. There is no middle ground on climate change – either we act or we let the planet pass the point of no return. This problem is completely fixable, but not if we try to reach a middle ground with oil companies and others who profit off the destruction of the planet. Ring of Fire’s Farron Cousins discusses this.

On Friday, Reuters reported the Joe Biden and his presidential campaign, which is still polling in first place no matter which poll you look at. Uh, they’re, they’re gonna try to come up with some kind of middle ground approach to climate change. They want to find common ground amongst all parties on how best to save the planet. Yeah. Isn’t that the kind of feel good, wonderful campaign we’ve been waiting for after years of Donald Trump’s just plain unpleasantness. Let’s all get along. Let’s find that common ground. Let’s have fossil fuel companies sit down at the table with environmentalists and then whatever each side says, we’ll come up with something in the middle. Cause that’s totally going to solve the climate problem, right? No. Likey has on so many other issues. Joe Biden, absolutely misfired on the issue of climate change, which really is the most important issue in this election. We’re running out of time, but there is still time. Okay, we can fix this problem, we can solve it, we can reverse it. And we can be revered as the generation of American citizens as a whole who averted catastrophe.

But we don’t have much time. We could fix it. But common ground, middle ground, whatever you want to call it, isn’t gonna fix it. Guess who shouldn’t have a say at the table? The people who caused the problem. That’s the bottom line. We do not need to hear from fossil fuel companies. We don’t need to hear from the frackers. We don’t need to hear from anyone who’s made a dollar off of this crisis. The people we need to hear from are the scientists and engineers who know what the hell they’re talking about and know how to get us to a solution. That’s pretty much it, right? We need the scientist to tell us how long we have and what needs to happen. You know, our mission goals and all those kinds of things. And then the engineers to tell us how to rebuild the energy infrastructure to support renewable energy, to deliver it a fashion, uh, efficiently. We already know that costs are coming down over renewable energy. It’s now more affordable and we need the workers possibly hear me out on this crazy idea. Take the people who are currently working down there in the coal mines with pick axes, you know, extracting that Cole and maybe instead put them to work building solar panels, maybe invest in some kind of public works project that pays for the retraining, pays great wages for these people, gets them out of the coal mines.

Yeah, and puts them out there working in this field. That way you don’t lose any jobs. You actually would need even more people than we have working in the fossil fuel industry to work in the renewable energy industry. Everybody just kind of switches gears, goes over here so we don’t lose any jobs. We actually create more jobs. We make a better planet and we avert the biggest crisis of our, of our lifetimes. That’s the only way to do it. And Biden’s out there telling us, let’s find common ground. There is no common ground on the issue of climate change. It’s do something and fix it or do nothing and accept our fate and I’m sorry, but I’m not willing to sit back and say, well we’re screwed. I guess this is just the way it is now. Just like most Americans aren’t willing to sit back and say that, and just like most Americans, including most of the people running for president on the democratic side right now, none of us would be willing to sit down with fossil fuel executives who’ve made billions of dollars lying to the public about the problem and selling the problem itself.

Yeah. We don’t want to hear from them. We’ve heard from them for decades, and the message they have said is clear. Climate change is a hoax. Climate change isn’t real. Suck it up and deal with it. We don’t need any more of that. There is no common ground to be reached at this point. It’s either take action or accept are dismal fate.