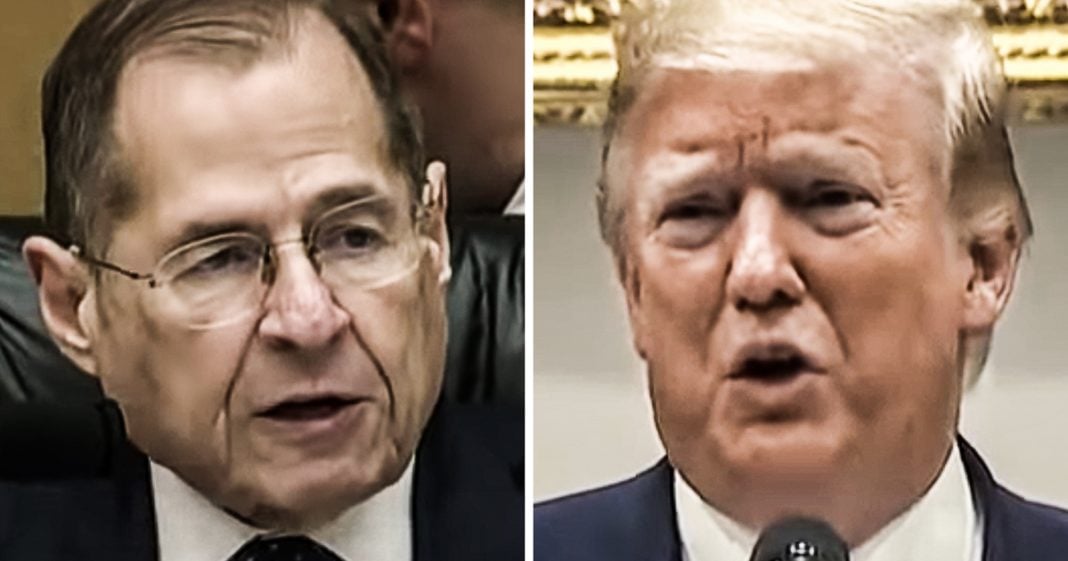 Democrats in the House of Representatives have been working on legislation that would all but guarantee that Donald Trump gets indicted as soon as he leaves office. The legislation would remove the statute of limitations for crimes committed by a sitting president, and they hope that it means he will be indicted for obstruction of justice as soon as he becomes a “former” president. Ring of Fire’s Farron Cousins discusses this.

Democrats in the House of Representatives led by Jerry Nadler, Ted Deutch and Eric Swalwell are currently crafting legislation that will all but ensure that Donald Trump gets indicted. The second he leaves office for Obstruction of justice and this bill that they’re crafting, which is called the no president, is above the law act, would basically suspend the statute of limitations for crimes committed by a sitting president because after all, the office of Legal Counsel says you can indict a sitting president. So these Democrats say, okay, then we’re going to get rid of the statute of limitations so that if Trump serves another two years or God forbid, six years, well, just indict him the second he leaves the White House for obstruction of justice, put them on trial and then go from there. It all works out for everybody. Well, I have several issues with this. First of all, I do love the idea and I think it should be put in place.

However, it doesn’t need to be put in place because you 100% can indict a sitting president. I don’t know why Democrats are buying into this republican lie that you can’t indict a sitting president that was based on a suggestion from a DOJ memo, not even a policy of frigging memo from the 70s like some dude jot something down 40 years ago, 50 years ago, and you guys like, oh no. It doesn’t work like that at all. You’re being cowards and you’re not wanting to do what everyone wants you to do. Furthermore, you have this 650 former federal prosecutors who’ve signed a statement saying that, yeah, you can indict a sitting president. So technically this no president is above the law act shouldn’t even be necessary, but it actually is not just for Donald Trump, because that’s not even who I’m thinking about right now. I don’t know if you folks remember this, but from a 2001 to January of 2009 it was a man sitting in that Oval Office as president of the United States during his time as president, that man illegally started to wars illegally disappeared, terrorism suspects to drive them off to black sites off the map, and illegally approved the torture of these people in violation of countless international treaties and US laws.

So if we suspend the statute of limitations on a former president, does that mean we finally get to prosecute George W. Bush for war crimes? Because honestly, obstruction of justice, yes is bad. Everything Trump has done is bad, but we have to stop pretending like the dude who was republican president before this Republican president didn’t do things that we’re actually so much worse because they were so much worse. They honest to God were and that man should be prosecuted. So I am all for this piece of legislation. I think in the case of Trump it is completely unnecessary. But in the case of George W. Bush, hell yeah, let’s finally, because that statute of limitations has expired on George W. Bush, but let’s hold that man accountable. Let’s go back and show people that, you know what? Sometimes it may take us a while, but eventually you commit a crime in the United States, whether president or not, you’re going to be held accountable.