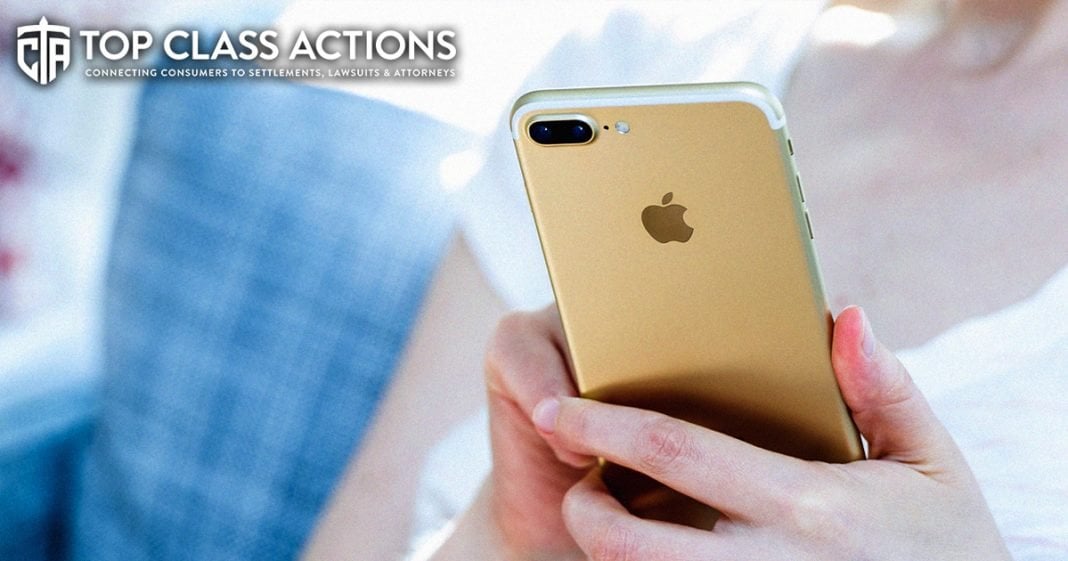 Customers claim that the audio integrated circuit in the Apple iPhone 7 or 7 Plus is defective, making the phone partly unusable. The three plaintiffs argue that Apple should have been or was aware of the defect but continued to sell the phones to consumers, misrepresenting them to be free of defects. Ring of Fire’s Farron Cousins discusses this with Scott Hardy from Top Class Actions.

Farron Cousins:                  One thing we’ve learned in the last 10 years is that American consumers are willing to fork over a lot of money pretty much every year or every other year to get the latest and greatest cell phone. But when you fork over hundreds of dollars or in some cases over $1,000, you expect that cell phone to work the way it’s advertised, specifically being able to make phone calls. But unfortunately some iPhone users have found out that there’s an audio defect that is actually preventing them from being able to use the phone to actually make phone calls.

Joining me now to talk about this is Scott Hardy from Top Class Actions. Scott, iPhone’s obviously very expensive whenever the new models come out. So people want it to work. I mean, nobody wants to pay $800 for a pocket video game machine. We also want to make phone calls, but some users of the iPhone 7 and iPhone 7 Plus finding out that they can’t do that because of some kind of defect. Tell us what’s happening,

And so you have this alleged manufacturing defect that happened to the previous model. You have people experiencing the same thing in the new model. You would think Apple would come out, take ownership of it and say this happened to you, please bring in your phone. We’ll go ahead and fix the solder. You’re golden, we won’t charge you for it cause we’re Apple.

You know, we’re worth $1 trillion. Come on, let’s help the people out here. But they haven’t and that’s the crux of this class action is that people were complaining of the issue. They call into Apple support. Apple says, no, this isn’t a technical issue. This is a problem maybe with your cell phone carrier. That sounds right, let’s leave it on Verizon and AT&T’s doorsteps and say that’s their issue. When in fact that really does appear that it most likely was a manufacturing defect that they already knew about, but they weren’t taking ownership of.

Farron Cousins:                  You know, a lot of people don’t seem to understand, I mean, these phones look they’re, they’re packed with the latest and greatest technology, but that technology can only do so much when it’s not put together properly. I know just a little bit of anecdotal evidence here, my wife I believe she had an iPhone 6, she dropped it. It had a case on, no cracks in the phone, nothing. Within five minutes, that phone just began to overheat like crazy to the point we had to actually just go set it out in the backyard because we were afraid it was going to explode, which is something we’ve seen with the Samsung phones.

But that’s how delicate these things are because they’re made that way. Sure you could make them tougher. You could increase the amount of solder on there to an extent without losing any functionality on that. But the more parts you have to use, the more solder you have to use, the more circuitry you put in there just to make sure nothing snaps or goes bad, every little bit of that cost a little bit more money, and we’re literally talking pennies here.

But when you’re producing a few million phones a day, sure it adds up for the company. They don’t want to spend it. They would rather assume that you’re not going to call them on it whenever this phone just stops working. And when you do call them on it, as you pointed out, they’re just going to say, eh, it sounds like an AT&T problem. Why don’t you take it up there for them to deal with?

Scott Hardy:                          Right. It’s, it’s an AT&T problem. Oh wait, you’re right. This one is a technical problem. $150 please, or whatever they’re going to charge to fix that soldering point and add an extra beat of solder on it. But you’re, you’re right. They don’t want to interrupt their assembly line to actually address the issue and fix this thing for everybody. Add a little bit of extra reinforcement. So in case someone drops their phone, and all of us do, that you don’t have a weak joint in that solder that could cause this. So we’ll have to see how this one plays out.

You know, I’ve actually already read through some of the court transcripts and taken a look at some of the data behind it and the expert witnesses that are out there. And you know, I can tell you that the lawyers who are behind this are fully loaded and that we’ve already almost had 4,000 shares of this on Facebook. And so there’s a whole lot of people out there that are following this one closely that want to either get their iPhone 7 or 7 Plus fixed or they want to get paid back for what they paid Apple to fix it for them.

Farron Cousins:                  And let’s hope that, you know, these lawyers are able to do that for these people. And more importantly, that these lawsuits have some kind of impact on the company to where they say, you know what, take an extra 30 seconds in the manufacturing process. Spend an extra 5 cents to make it to where this thing won’t happen again.

If anybody needs more information on this, and I am assuming a lot of you out there actually watching this on an iPhone, you can follow the link in the description of this video and head on over to topclassactions.com and while you’re there, make sure you sign up for their newsletter. It’s the best way to get all of these stories and more delivered right to your inbox to arm you with the knowledge that you as a consumer need to know about. Scott Hardy, Top Class Actions. Thank you very much for talking with us today.